In a rising sea of pixel-art “rogue-lite” RPGs, it takes something special to stand out. For Moonlighter, that something is an element of shop management: playing as the owner of an item shop, you’re tasked venturing into dungeons in search of wares to sell, in turn allowing you to build up your shop and better equip yourself for the trials ahead.

Moonlighter tells the story of Will, a resident of the small village Rynoka and heir to the titular item shop, Moonlighter. There was a time when Rynoka was bustling with the activity of adventurers and would-be heroes, thanks to the discovery of some strange, loot-filled dungeons. But with all but one of those dungeons now closed due to safety concerns, Rynoka is a ghost town and Moonlighter is struggling.

Will is a “lowly” merchant tasked with reinvigorating the family business, but he dreams of being a hero. Luckily for him, he can do both: run the shop by day, before venturing out into the dungeons at night—despite the protestations of the village elder—in search of precious new loot to sell. 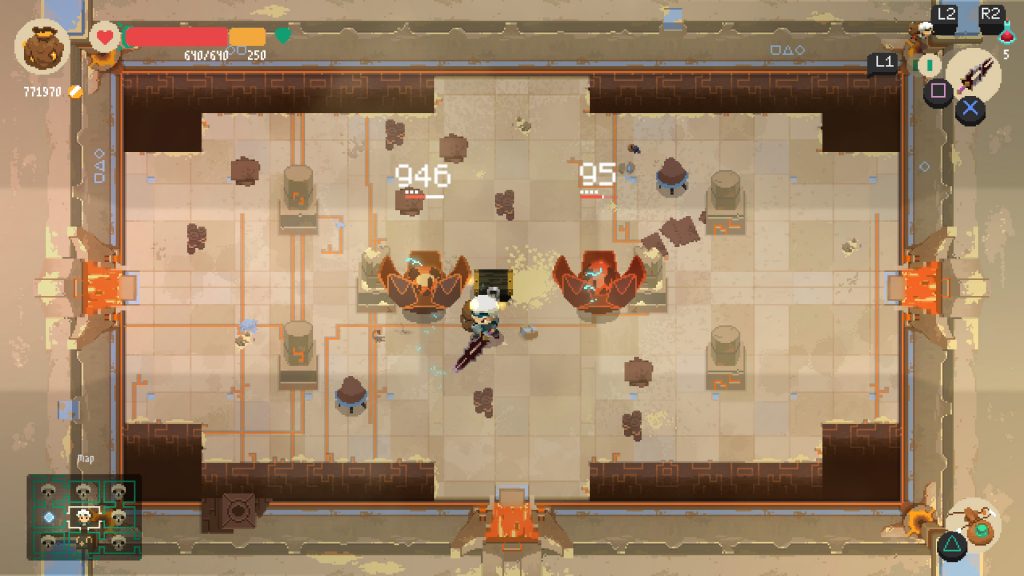 Therein lies the basic structure of Moonlighter. By day, you run the shop: choose which items to display, set prices, take on customer requests, and keep an eye out for shoplifters. By night, you venture out into the game’s five dungeons, fighting monsters and looting chests. (You can also raid dungeons when the sun’s up, should you choose not to open shop on a given day.)

Each side of the game is fairly simple, but that’s to its credit. This simplicity allows the shopkeeping and adventuring elements to neatly complement each other, with neither becoming overwhelmingly complex or dominating your playtime. To some extent, you can choose where to put your focus, but it’s the synergy between the systems that really lets Moonlighter shine.

For its part, shopkeeping mostly involves figuring out the best prices to sell items for so that you can make as much money as possible without alienating your customers. Once you’ve set a price and put an item in display, customers will react accordingly: a smiley face means the price is good; a sad face means its slightly overpriced—they’ll still buy it, but demand for that item will fall; an exasperated face means it’s well overpriced; and a huge smile with coins for eyes means it’s a lot cheaper than it’s actually worth. 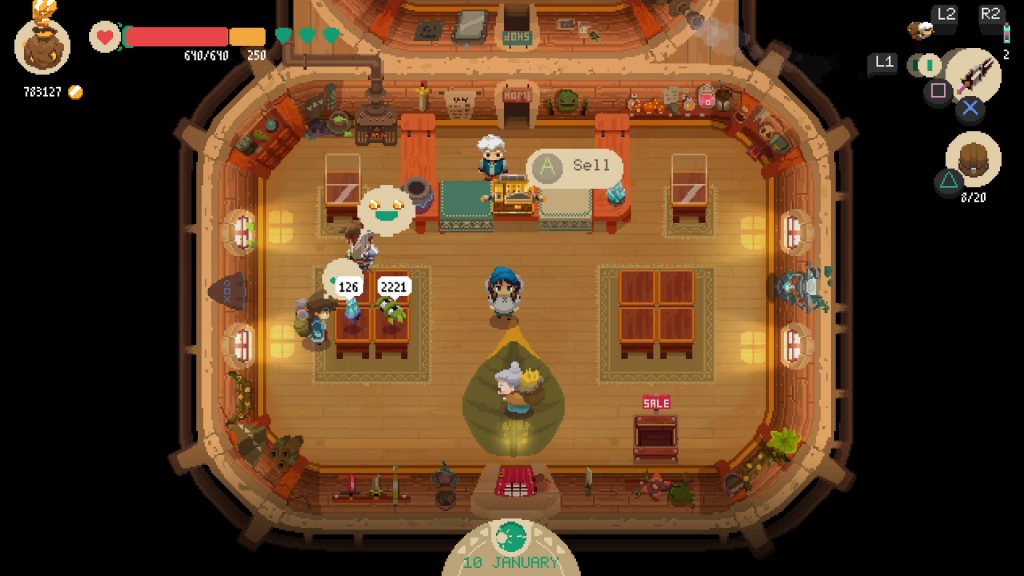 As such, there’s a game of hot or cold in trying to find the optimal price for a particular item. You start by setting a price somewhat arbitrarily, and then slowly refine that based on reactions. An in-game journal helps a lot, both by giving you clues about an item’s broad value, and by keeping a record of reactions at various price points. From a pragmatic perspective, you probably want to try find the sweet spot at the top end of the smiley-face range—ideally, one good coin below the sad face threshold. In the other hand, if you’re feeling philanthropic, you could just underprice everything and enjoy the joyful faces of adventurers finding a bargain.

Your profits in turn allow you to upgrade the store, letting you display more stock at a time and put up decorations with helpful benefits. More importantly, it allows you to bankroll other facilities for Rynoka, like a blacksmith and a potion maker, who in turn provide gradually more powerful equipment and items.

The adventuring side of Moonlighter is, for the most part, your standard action RPG fare: run through a dungeon, fighting monsters with a straightforward dodge-and-counter combat system, collect loot along the way, and face off against a huge boss at the end. The one neat gimmick comes with the curses that afflict items you find in chests. Rather than status afflictions in a typical RPG sense, curses in Moonlighter affect how an item interacts with your inventory and other items that surround it. You might get some loot that can only be placed in the outermost columns of your bag, or that destroy an adjacent item upon return to town. Some curses are beneficial, letting you do things like remove other curses or immediately send another item back to your shop, freeing up a bag slot. Micromanaging your inventory is a big part of adventuring in Moonlighter, but the curse systems makes it into its own sort of puzzle, rather than a chore.

Should you die, you’ll lose all but the top five items in your bag and return to town, but that’s a fate easily avoided: at almost any point, you can spend a few coins to teleport away to safety, and for a heftier sum, you can open a portal that lets you return to town, empty your bags, stock up on potions if need be, and then return to where you left off.

Even if you do die, the consequences aren’t really that dire—you don’t lose any of your equipment or character growth, and you can start again from the beginning of any dungeon you’ve unlocked. Moonlighter is described as having “rogue-lite elements”, but I think that’s a stretch. I don’t say that as a criticism—if anything, I think this game benefits from being as forgiving as it is—but it’s worth noting, given the way Moonlighter is described in store listings. 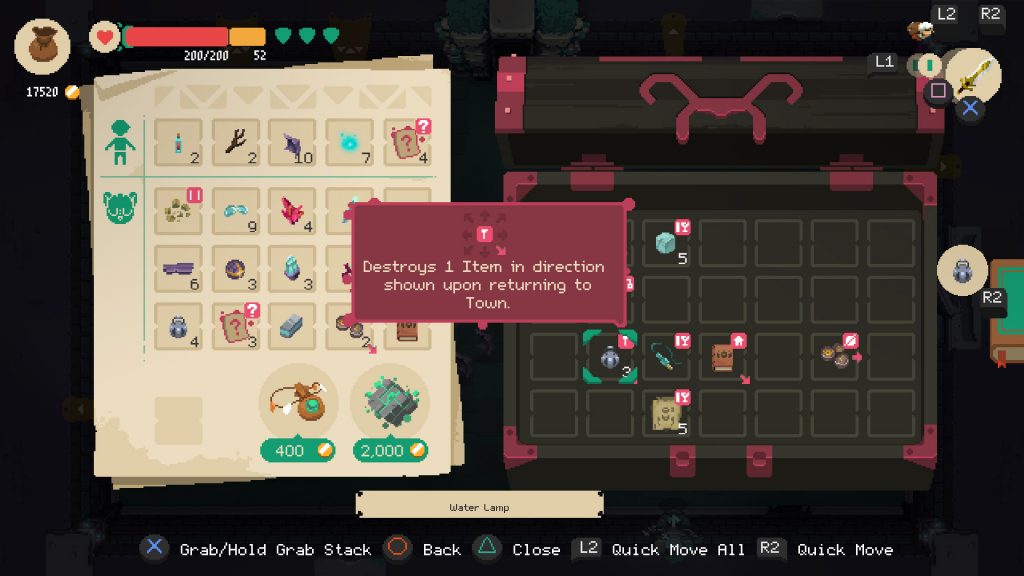 Admittedly, Moonlighter does suffer from a few niggling issues that make some parts of the game more frustrating than necessary. When buying potions, for instance, you can only do one at time, even though you’ll almost always want a stack, forcing you to repeatedly select the potion, confirm the sale, then watch a short animation of it brewing. The control scheme for moving items around in your inventories isn’t too intuitive, and an auto-sort option would go a long way—especially for the storage chests in Will’s home, which have multiple tabs and where the puzzle element of item curses no longer applies.

Also—and this is more of a personal complaint, perhaps—I didn’t much care for Will as a character. Moonlighter struck me very much as the story of the town, the shop, and the dungeons, rather than of Will himself, and I think giving players some simple character customisation options could have gone a long way in building that investment. Let Moonlighter be your shop, rather than that of some voiceless pre-defined avatar. I realise that budget is probably a factor, but I’m not asking for Black Desert Online‘s character creator; even something as simple as a custom name field and few different hairstyle options would have made a big difference.

Even so, Moonlighter is a well worth a look. The  shopkeeping and action RPG elements but be been overly simplistic on their own, but they complement each other beautifully and result in a very compelling game indeed.

Moonlighter is developed by Digital Sun and published by 11 bit studios. It’s available now for PlayStation 4 (reviewed), Xbox One, and PC, with a Switch version due out later this year.