Moero Chronicle is a lewd game. It knows this and it owns it, and there’s something refreshing about that. This is an ecchi game through and through: it’s full of scantily-clad women and liberally employs clothing destruction and rubbing mechanics. That’s obviously not going to be for everyone, but Moero Chronicle knows what it is and it owns into it with self-awareness and humour—there’s no Kojima-style “words and deeds” nonsense here. I can respect that.

At the centre of Moero Chronicle is Io, a young man with a problem: he has an intense fear of being seen as a pervert, to the point that he struggles to talk to any girl other than his childhood friend Lillia. This is particularly troublesome because the world that Io lives in is shared by humans and cute, sexy monster girls, who more or less live in harmony—Io’s awkward exchanges notwithstanding. That is, until some strange curse causes all the monsters to go rampant and start attacking people.

For some reason, the awkward Io is chosen to travel through the monsters’ lands to find the source of the problem and restore sanity, setting him on a path to overcome his own insecurities as well as saving the world. Luckily, he’s got Lillia with him, and a growing group of monster girl allies (as well as a crass, perverted seal-like creature called Otton, who makes Io look as pure as a nun by comparison.) 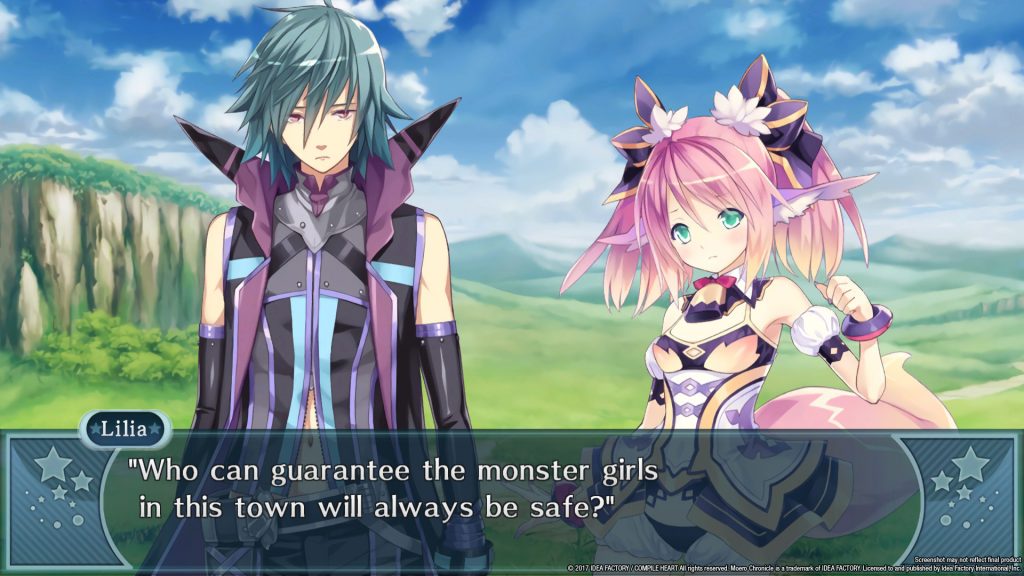 It’s an utterly silly premise, and it’s certainly a setup designed to serve Moero Chronicle’s ecchi leanings, but it works. The exchanges between Io, Otton, Lillia, and the numerous other monster girls they encounter are hilarious and eccentric, playing off Io’s awkwardness and Otton’s brazen horniness to great effect. Each of the monster girls has her own unique personality as well, from the mischievous Imp to the fierce Calypso, and the way they interact with the unlikely heroes (and with one another) is by turns funny, racy, and heartwarming.

That last point may come as a bit of a surprise, given how unabashedly raunchy the whole game is, but it really does manage to find a good balance. The main plot is mostly driven by simple, humorous exchanges as the growing band of would-be saviours of world travels through the different monster realms, but there’s also a big relationship simulation element that lets you get better acquainted with the different characters, and some of their stories are surprisingly deep.

With around 50 different monster girls to recruit, there are plenty of individual character arcs to see through. Even you don’t pursue every storyline to its conclusion, which is a big ask, just getting briefly acquainted with each is a good way to get a sense of what they’re like and to appreciate the quality of the character designs. Each companion is a familiar, classic monster of some sort, reimagined as a cute girl. I bet you never imagine a slime could be cute, or a gargoyle, or a Baphomet, but Compile Heart’s art team found a way. 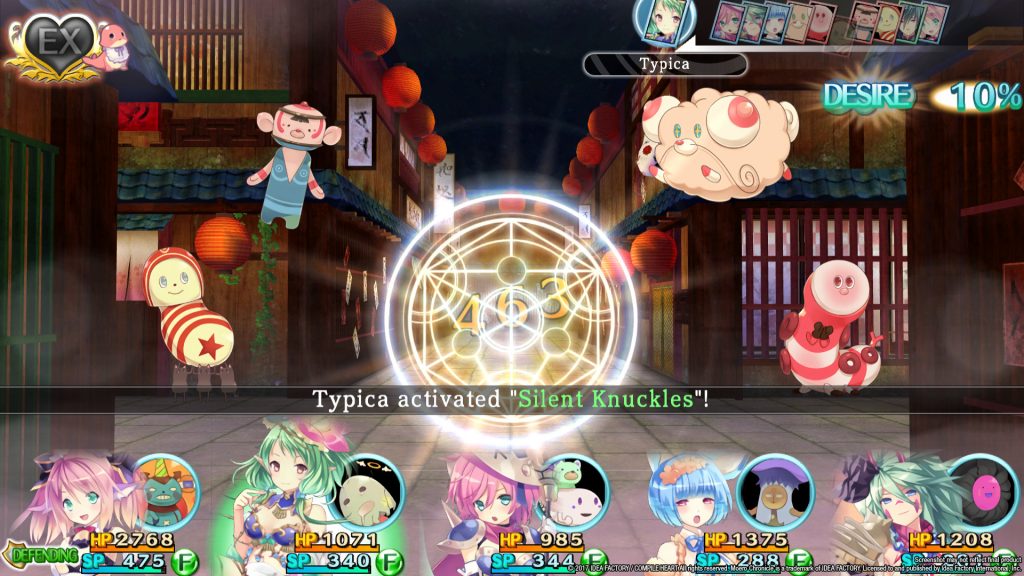 When you’re not spending time with your moe monster companions, you’ll be delving into a range of different dungeons in search of a solution to all this rampaging monster nonsense. If you’ve played any other modern first-person dungeon crawler, nothing about this side of Moero Chronicle will come as a surprise—it conforms to the genre standards pretty closely. You move through each floor of each dungeon, one space at a time, mapping out your way and solving simple puzzles to proceed.

Battles are similarly straightforward and typical of the genre. They’re turn-based, with an emphasis on making the most of elemental weaknesses. Enemies come in a wide variety of designs that look like they’re pulled straight out of a horny adolescent’s acid trip—from weird little critters wearing panties on their heads to personified bananas—but there’s little to distinguish one enemy from the next in terms of behaviour. When it comes to regular enemies, the combat system is unremarkable; it’s not bad, but it’s not great. The frequency of encounters certainly doesn’t do the system any favours, either. Battles seem to come every couple of steps, making the whole system overstay its welcome before you’re even out of the first dungeon.

Boss battles, by contrast, introduce a few other mechanics that make them a lot more interesting, because this is how you recruit new monster girls to your cause. The ultimate goal of each boss battle is to cure the girl of whatever’s driving her berserk, which you do by… stripping her of her clothing and rubbing, stroking, and caressing her. Yes, it’s weird, and yes, the game knows this and plays this up as much as it can. 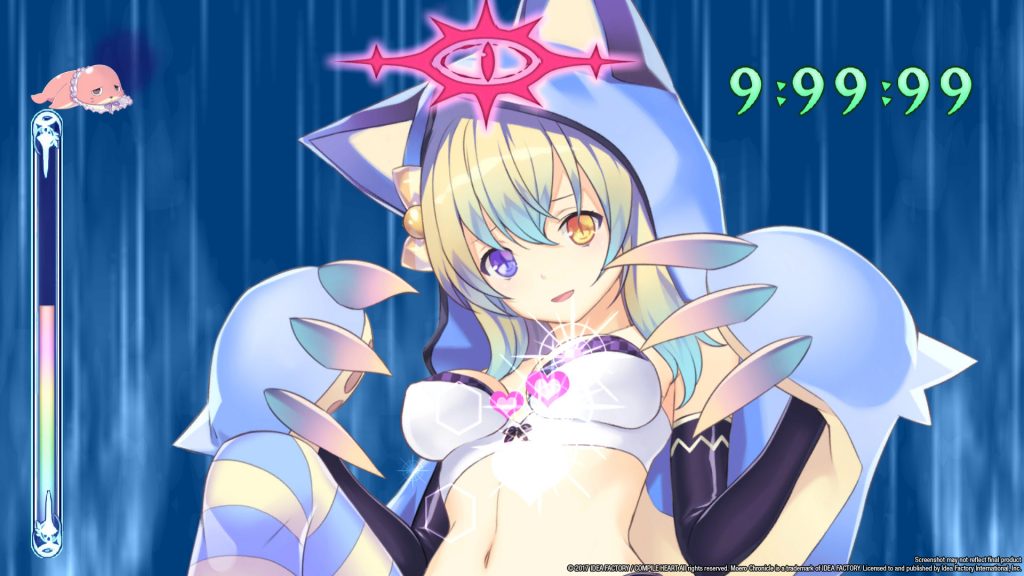 Essentially, boss fights are all about getting Otton excited, which you do by attacking girls’ clothing until they fall off. Destroy enough clothing, and Otton’s excitement peaks, triggering a petting minigame. Stroking and rubbing her in the right way gets her excited (and Otton too, by extension), and if you can get her reach her peak, so to speak, she’ll snap out of her rampage and join your team. If not, she’ll simply run away and disappear for a bit, before showing up later and giving you another chance to recruit her.

It’s lewd, it’s funny, and it’s uncomfortable at times, but such is the way of ecchi games. And like I said before, one of Moero Chronicle’s best qualities is how fully and unashamedly it embraces its almost-but-not-quite-pornographic nature.

That said, I did find this whole minigame frustrating for a different reason: the controls. Moero Chronicle was originally a PlayStation Vita game, where the rubbing game made sense given that system’s two touchscreens. In the PC version, you’re stuck using either the mouse or the analogue sticks of a controller, neither of which works quite as well as the touchscreen controls this system was designed for. More than a few times, I failed a boss battle purely off the back of clunky controls, and that’s always a nuisance. (I believe you can use touch controls if you’re playing on a device with a touchscreen, like a hybrid tablet/laptop, but I wasn’t able to test this out.) 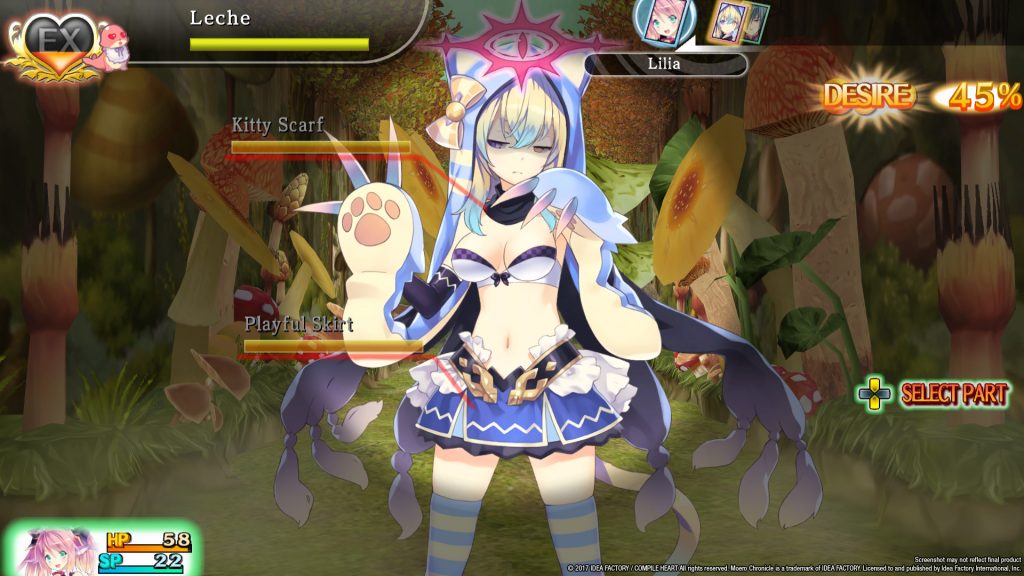 The other issue that Moero Chronicle faces is that it came out less than a month before Mary Skelter: Nightmares, another dungeon crawler from the same developer, and a far superior one. The Japanese releases were years apart—Moero Chronicle came out in 2014, and Mary Skelter in 2016—so it makes sense that the latter would build on the former and deliver a better overall experience. But when they’re both getting their English-language debut so close together, Moero Chronicle suffers in the comparison.

Read my review of Mary Skelter: Nightmares to find out more about why it’s up there with my favourite games of the year.

It’s not a bad game at all, but it just seems like everything that Moero Chronicle tries to do is done better by Mary Skelter. The latter’s maps are more intricate, puzzles more involved, combat more deep, and story more engrossing. The production values in Mary Skelter are much better; aside from the gorgeous art used for the monster girls, Moero Chronicle looks like it was built on a very tight budget. Enemies are simple static sprites, dungeons are very simplistic and repetitive in their visual design, and even the UI feels like its lacking polish. Again, the comparison is slightly unfair given how big the gap was between the two games’ development cycles, but the proximity of their western debuts makes it hard not to compare them.

What Moero Chronicle has going for it, really, is its lewdness, and so how much you get out of it is going to depend entirely on how much you enjoy such humour. It’s not subtle, and it embraces what it is without shame or misguided attempts to justify itself. Your mileage may vary, but I enjoyed it well enough on those grounds alone.