Will O’Neill’s Little Red Lie is a challenging game. I don’t mean that the way people usually do when they describe a game as “challenging”—after all, there’s very little traditional “gameplay” here. No, Little Red Lie‘s difficulty comes through the ideas it explores and the way it explores them: it’s an overwhelmingly bleak game, to the point that I could never play more than an hour or so at a time. I just got too depressed.

I mean that as a compliment. As a critique of late capitalism and how it ruins people’s lives, Little Red Lie is a game that it exists to be depressing, to make a point and to challenge your thinking. If it were “fun”, it would be a failure. My difficulty getting through it—something shared by most other people I’ve talked to who’ve played it—is a sign of the game’s success at what it sets out to do.

Little Red Lie plays out through two main characters, alternating between them with each new chapter. On the one hand, there’s Sarah Stone, a woman in her late 30s who’s struggling to make ends meet after losing her job, and is living with her parents and her severely depressed sister. On the other hand, there’s Arthur Fox, a millionaire who makes his money off “motivational” speaking—in other words, lying to suckers who pay through the nose to hear him talk. 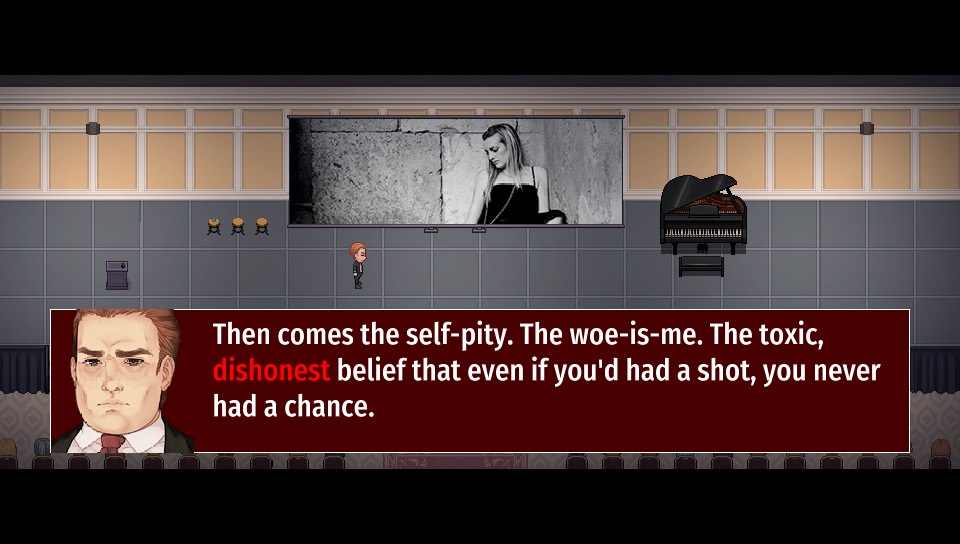 Through these two characters, we see two very different sides of the capitalist coin. Sarah’s someone who did everything “right”: she got an education, graduated from university, found herself a career, and began climbing the corporate ladder. But then, for reasons beyond her control, she lost everything. She worked long hours and burnt herself out in service to her company, but they repeatedly overlooked her for promotions and eventually fired her. She has to rely on her parents to support her, but they’re struggling, too; her mother and sister are both sick, and relying on expensive medications to get by.

Arthur Fox, meanwhile, lives the “good” life. He drinks all the time, he does ridiculous amounts of cocaine, he buys expensive cars on a whim, and he does all this because he profits off people like Sarah. The people coming to Arthur’s seminars are people in similar (or worse) situations, looking for a way out of poverty. Arthur promises them that, then tells these people what they want to hear—even though he doesn’t believe it himself, and knows that his advice won’t actually help. In his internal monologue, he shows nothing but disdain for those “below” him, believing their fate to be entirely of their own making.

That’s how Little Red Lie starts, and it all snowballs from there. Both protagonists find their way from one puddle of proverbial shit to another, with Sarah’s increasingly dire financial situation and Arthur gradually succumbing to his own nihilistic psychopathic tendencies. The point isn’t subtle: capitalism, as it is now and as it’s heading, destroys lives, and not just of those on the bottom rung. 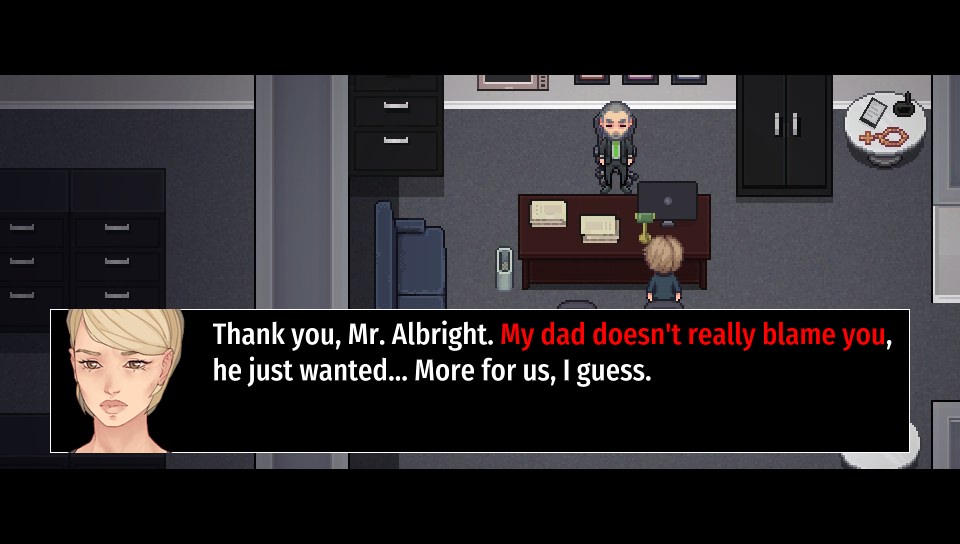 As blunt as that message comes across when I sum up the story like I have, there’s a lot of nuance in how Little Red Lie approaches it. The character-focused writing inject a human element that’s crucial to this sort of story, allowing you to empathise with the people in the game in a way that drives everything home that much more potently. It’s easy to see how this would be the case with Sarah, what with her being a fundamentally good person who deserve what she gets, but this is just as true with Arthur—but not in the way you’d expect.

Little Red Lie isn’t really interested in trying to convince you that rich people have it rough too, sometimes. Rather, in seeing Arthur’s story through his own eyes, you get a sense of just how much he believes his own bullshit. He genuinely believes that he’s in the position he’s in because he worked hard for it and deserves to be there, and sees his swindling of poor people as justified because if they were smarter, they wouldn’t get sucked in. He’s an empathetic character, but not a sympathetic one; you’re not supposed to feel sorry for him, or justify his actions, but in seeing his story through his eyes, you see how the cruelty of capitalism manifests and regurgitates itself. 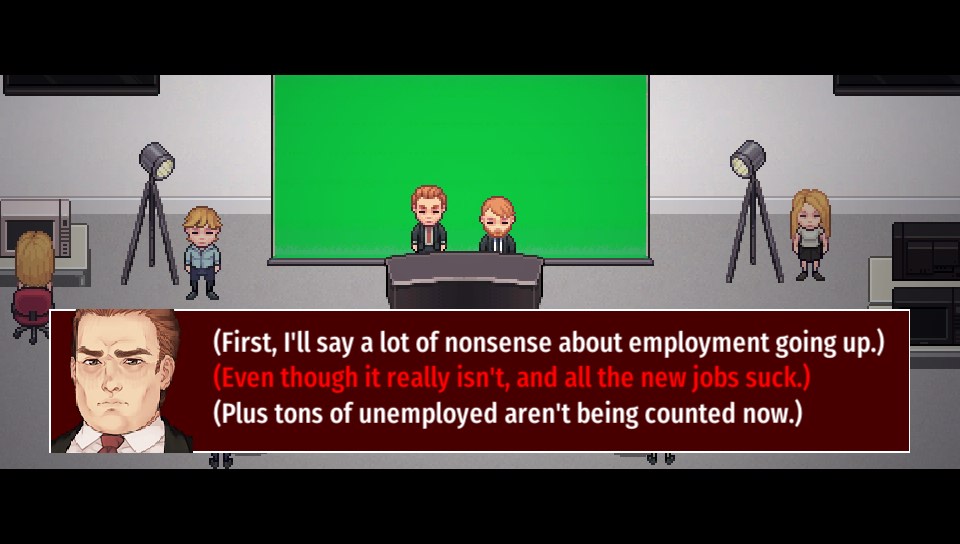 Content and spoiler warning: the next two paragraphs address a depiction of sexual assault within the game

This is most apparent in a controversial rape scene about midway through the game. After a party, a drunken Arthur coerces his assistant into an affair, and upon realising what he’s done, he tries to deny it. The game then prompts you to “cover up rape”, and you’re tasked with hiding evidence so that, should anyone come investigating, it doesn’t look like what happened actually did. While all this is happening, said assistant is crying in the hotel bathroom.

It’s a scene that’s been criticised for being callous and even supportive of rape. One could argue that it goes too far, but it has a very specific point to make and it does so in a powerful way. In all his cover up efforts, and the monologues that accompany them, you see Arthur convincing himself that what happened didn’t happen. You see the power that comes with privilege in his ability to make something so heinous go away, and in his interactions with the assistant later on, you see the powerlessness of her side of the coin. It’s an ugly scene, and Little Red Lie would arguably still work without it, but it cuts to the heart of what the game is trying to do with Arthur Fox. He’s not a hero, he’s not a player-insert character; he’s an asshole, and the Little Red Lie makes you complicit in his horrific behaviour to drive home the point. 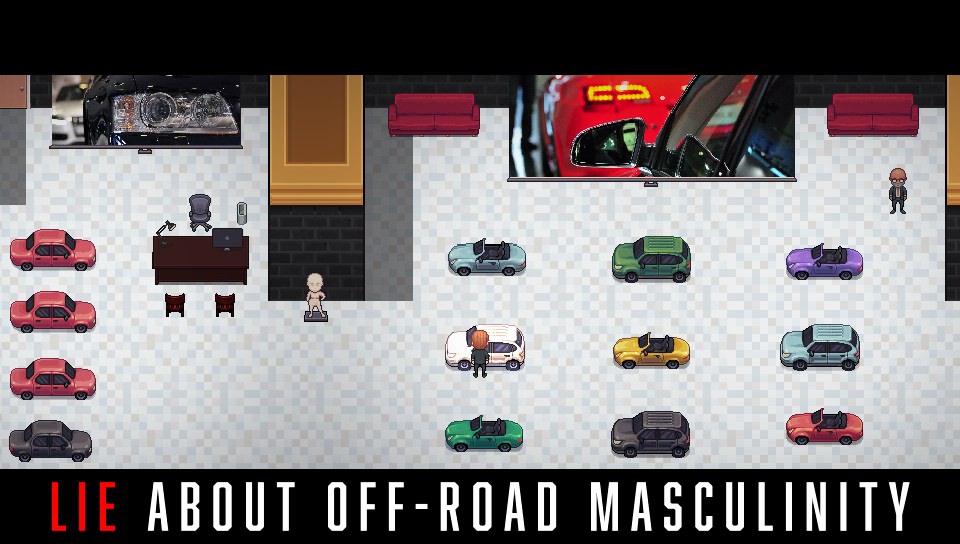 If the title didn’t give it away, Little Red Lie also makes lying a central theme. Throughout all the dialogue, lies are highlighted in red. Sometimes they’re blatant, like Arthur telling his audience that he cares about them and wants them to succeed; other times they’re little white lies; often, they’re a character lying to themselves through their internal monologues.

In so doing, the game draws a comparison between “bad” lies and “good” lies, but where it ultimately comes down is that lying is an inherent part of communication between people. We all tell little, seemingly-innocent lies every day, often but not always without consequence, and Little Red Lie draws attention to that with almost every line of dialogue.

It’s becomes particularly fascinating when you start trying to pick apart the less-obvious lies; those ones where the red text almost seems like it could be used for emphasis. Sarah talks about “waking up at two in the morning”, with “waking up” tagged red–if that’s a lie but “two in the morning” isn’t, she’s probably not getting to sleep in the first place. A red “why” after hearing some bad news is a lie because Arthur already knows the answer. When Sarah asks her friend “What’s wrong with working here?”, the whole question is red–implying at, despite what she says, Sarah does look down on her friend for working in a coffee shop. 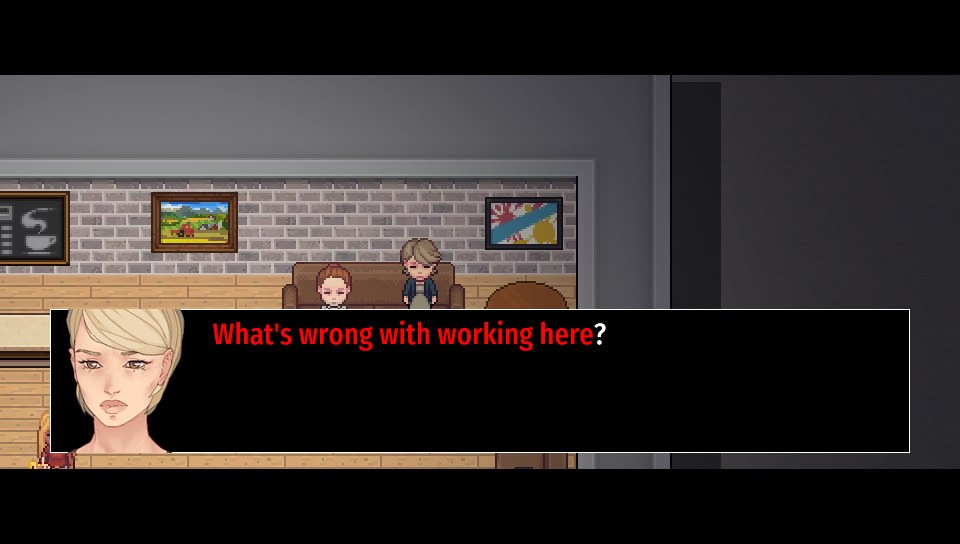 If you really want to dig into it, the red text can even point you to “lies” in things like the copyright disclosure statement. When you load it up, Little Red Lie has a fairly standard message about any similarities to real world people and places being coincidental. However, certain words in that statement are red: “fiction”, “imagination”, ” purely coincidental”. Taken as lies like the rest of the red text, you can extrapolate that parts of the game are based on real life—which makes sense, given its intent to pick apart the real-life consequences of real-life capitalist structures.

Often, you’re given dialogue choices of a sort. Rather than distinct, finite choices, they’re the character’s train of thought; when you read the different options in sequence, they form a single, coherent idea, and all you’re choosing is which part of that idea to focus on. In almost every case, the choice doesn’t matter, because regardless of what you choose, the character will say something else—a lie, instead of the truth that the dialogue options represent.

There’s no doubt that some will take frustration with these choices that “don’t matter”, but that’s their purpose. Our lives are influenced by other people more than we care to acknowledging, and in presenting you a choice and then stripping it away from you, Little Red Lie draws attention to that. And in the few instances where the choice actually does affect the game, it’s all the more powerful as a result. 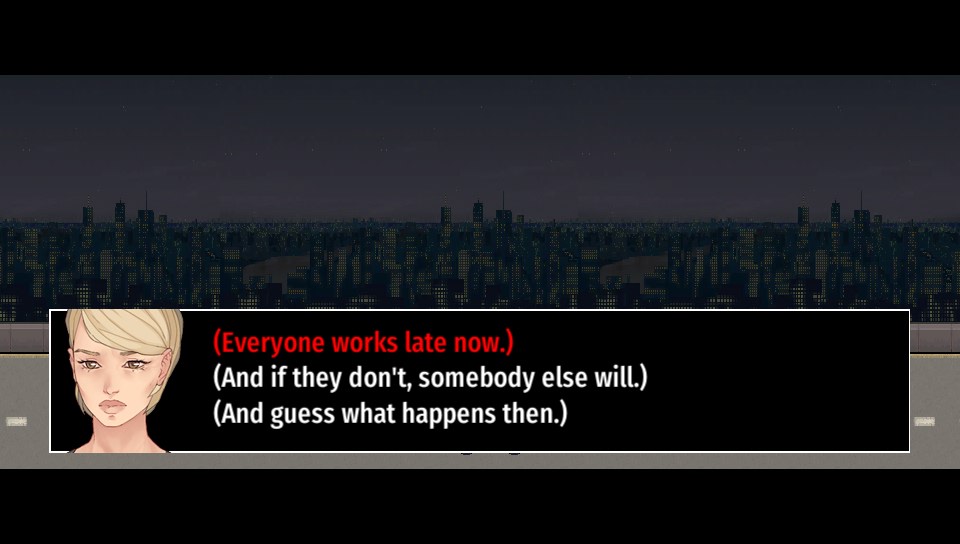 I think Little Red Lie will be a game that you either love or hate. It’s confronting and uncompromising in its effort to really draw attention to the inhumanity and the human cost of capitalism, and the result is a game that’s wholly depressing. After the end credits roll (and you’ve played your way through the brilliant post-credits bonus scene), it’s hard to not feel drained, even empty. But that’s to O’Neill’s credit, because it’s in that empty feeling that you can really dwell on the powerful message that Little Red Lie delivers.