It’s a rare horror game that can make you regress to that little kid, hiding under the covers from the shadows that creep across the room. All the gore and body horror in the world can’t compare to the childhood fear of the dark, and a game that can build enough atmosphere to rewind the clock like that is something special indeed. Little Nightmares is that sort of game.

Rather than the graphic extremes often seen in horror games, Little Nightmares is almost cartoonish in its design. The main character, Six, is almost completely hidden beneath a bright yellow raincoat, and she’s dwarfed by the world around her. The enemies are caricatures more than monstrosities, like stout old janitor with absurdly long arms, or an tell, elegant woman who is a picture of opulence. But it’s a macabre cartoonishness, not unlike Tim Burton’s early work—one that juxtaposes a childlike innocence with the horrific.

That intended tonal conflict creates a sense of unease that pervades the whole game, and it’s this that makes it so unsettling. Little Nightmares opens with Six waking up in the bottom of a bizarre ship-like world—the Maw, it’s called, but you won’t learn that from the game itself. With little information about who she is or how she got there, it’s up to you to guide Six through an industrial nightmare world that’s both terrifyingly alien and familiar to a point of being mundane. 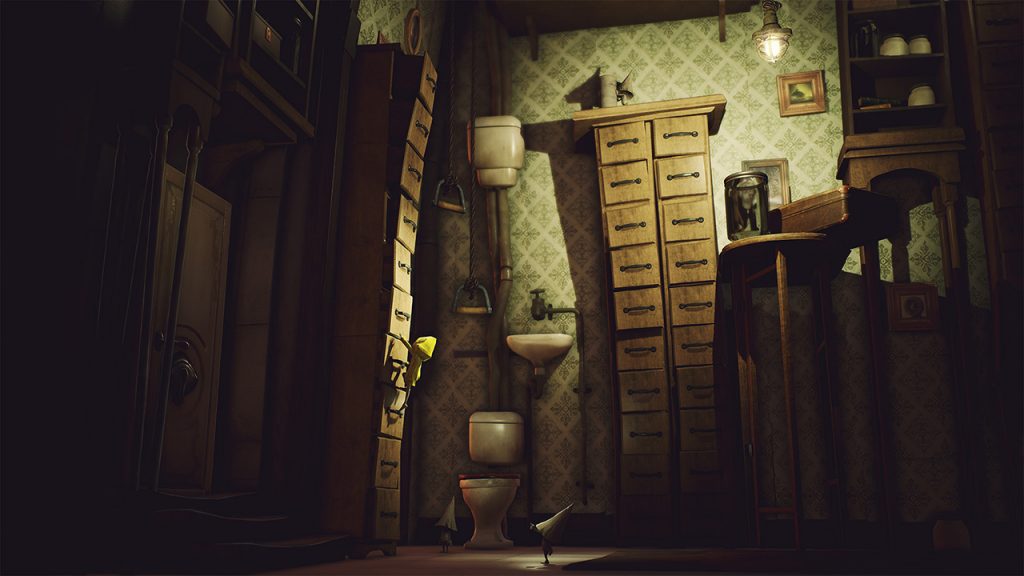 At first, there’s the fear of the unknown. The murky lighting, imposing set design, punctuated by strange sounds in the distance and odd flickers in the shadows, build a sinister atmosphere even before there’s any immediate threat. What’s unknown is terrifying, and there’s an abundance of it. As the stakes become more dire, the tension ramps up, but not at the cost of the atmosphere that Little Nightmares works so hard to build.

In its most intense moments, as you try to sneak by the janitor or flee the clutches of the chefs who want to cook you, Little Nightmares is stressful—as any horror game ought to be. In its quieter moments, the darkness is oppressive, and the thoughts of what’s hiding in the next pool of shadows are ever present.

It’s this sense of atmosphere that carries the game through its more troublesome qualities. It is, essentially, a puzzle platformer, and while none of the puzzles are overly difficult, it can be frustrating to figure out the rules that you’re supposed to work with. Much of the game relies on moving objects around so that you can climb to new places or reach doors and switches, there’s nothing to help identify what’s part of a puzzle and what’s just part of the environment. In one room, a suitcase that you can drag around and use as a stool will be key to solving a puzzle; in the next, an almost identical suitcase will simply be a prop, unable to be interacted with in any way. 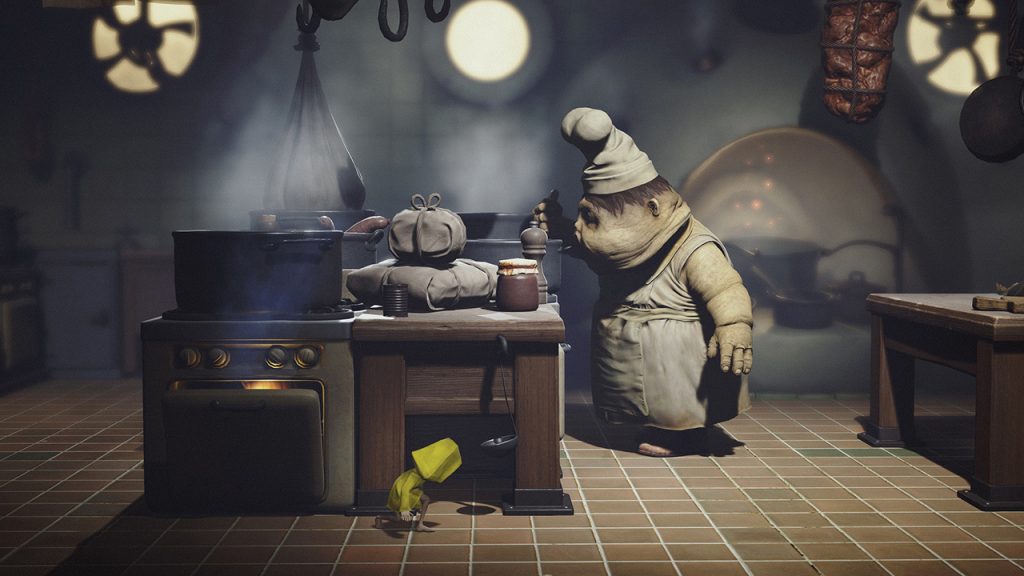 Unwieldy controls also hinder the experience, particularly in sections that demand a bit of precision. This isn’t a hardcore platformer, but there are still times when you need to make a well-timed, accurate jump from one object to another, and when Six not responding as you’d expect her to sends you falling to your doom, it can get frustrating.

At times, that’s exacerbated by the game’s sort-of-but-not-really 2.5D design: the camera is locked to a side-on perspective, as it would be in many a 2D or 2.5D platformer, but you have a full 3D range of motion, at least within the confines of each area. This mostly works fine, and the visual effect is stunning—it gives the whole game a sort of diorama feel—but it can also make it hard to judge the depth of platforms you’re trying to jump on to.

Whether by design or not, there’s a lot of trial and error in Little Nightmares‘ puzzles, as is typical of puzzle platformers and horror games more generally. Unfortunately, the Switch version in particular makes that far more tedious than it should be, thanks to lengthy load times. I often found myself waiting a good 15 or 20 seconds to reload—that may not sound like a lot, but when death comes as often as it does in Little Nightmares, those seconds drag on. 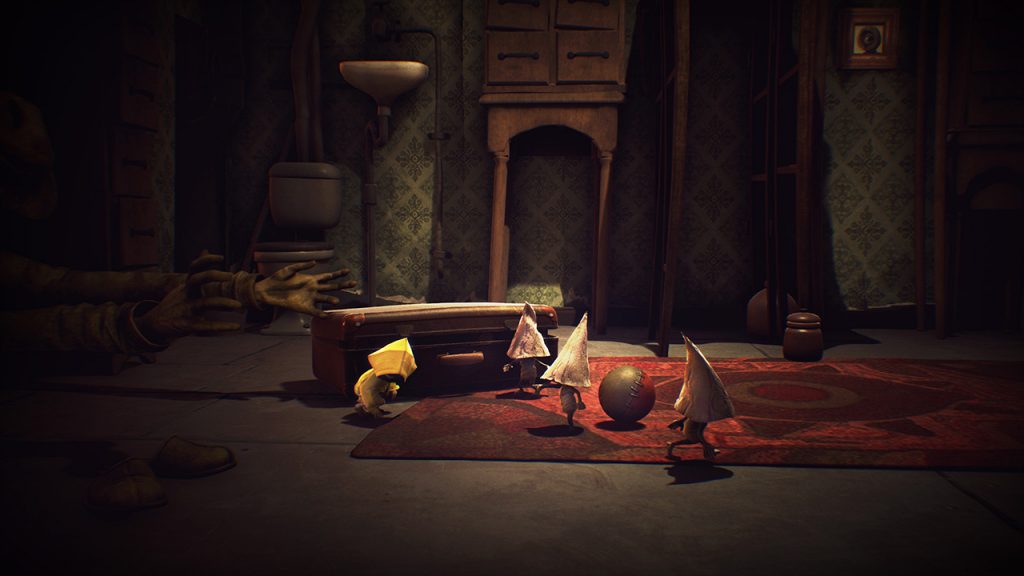 On the other hand, the Switch version also means you can conveniently play while huddled in a blanket fort in the dead of night, which is easily the best way to play Little Nightmares. As I’ve said a few times already, this is a game that’s overflowing with atmosphere, and Switch’s handheld mode lets you take that to another level. As a Complete Edition, this version also includes all DLC, giving you another lost child’s story to uncover and a chance to learn more about the Maw.

Clunky though it can be, especially if you’re easily frustrated (as I am), Little Nightmares is worth fighting through. It has a story to tell that’s haunting, sad, yet oddly hopeful, and the way it channels that childlike fear of the dark is masterful.