It’s a very good time to be a fan of dungeon crawlers. The last few years alone have given us Mary Skelter: Nightmares, Persona Q: Shadow of the Labyrinth, Hyakki Castle, among many others, each of which delivered a classic dungeon romp while also tinkering around the edges of the genre’s conventions.

Nippon Ichi Software’s Labyrinth of Refrain: Coven of Dusk doesn’t just tinker; it challenges the nature of crawlers as we know them, and delivers something remarkable in the process.

Labyrinth of Refrain starts more or less like any other dungeon crawler, albeit with a heavy dose of black humour courtesy of writer/director Tatsuya Izumi (of Witch and Hundred Knight fame). The witch Dronya has been called into a small town called Refrain to investigate an underground labyrinth, which she does by way of a sentient book (you) and an army of puppet soldiers. So you explore the first few floors, mapping them out grid square by grid square, solving simple environmental puzzles and fighting monsters in turn-based battles.

Then, just a couple of hours into the game, you gain the ability to break through walls. Another Kick in the Wall

Walls are everything in a dungeon crawler, more so than any other RPG. These games are, at their core, about solving complex mazes, so being able to just knock down a wall and waltz through fundamentally changes the game’s approach to level design, and players’ approaches to solving them. You have things like rooms that are completely closed off unless you kick a wall down, and keys locked away behind gates that you’d otherwise need the key in question to open. You can create convenient shortcuts, but thoughtless wall-breaking can just as easily send you on a scenic route or see you fall painfully through to the floor below.

Part of what makes this system work is that you can’t just freely break through every wall you come across. Firstly, some walls—highlighted in yellow on the map—are simply unbreakable. Secondly, walls stay broken only for the duration of your current dive; as soon as you return to the base, everything goes back to the way it was, so you can’t just slowly pick away at a labyrinth’s framework over multiple visits.

Most significantly, the wall break move costs a hefty amount of Reinforcement (RF)—a resource that’s also crucial for other tools like warping back to your base and healing your party outside combat. RF gradually recovers as you defeat enemies and harvest materials, but if you’re careless with how you spend it, you’ll soon find yourself with no option but a long trek back to the surface or a costly suicide move. 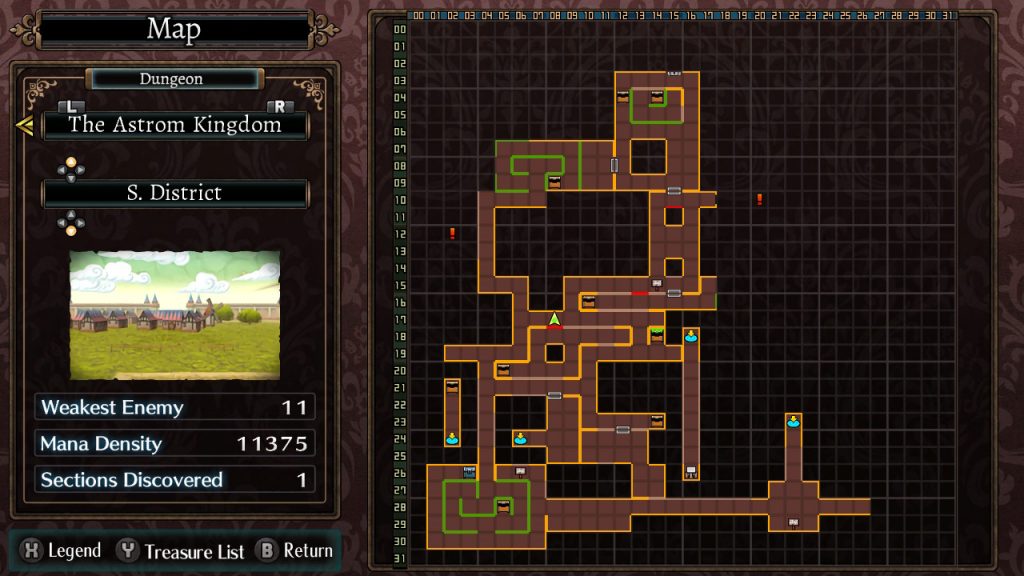 So, as much as Labyrinth of Refrain subverts the usual gimmicks of labyrinth design, it uses the limitations in place to create new ones. A lot of breakable walls are red herrings that achieve nothing except wasting your RF, and learning to identify those is a big part of mastering the mazes that the game throws at you.

Each new labyrinth also has its own quirks. The first couple are fairly balanced between breakable and unbreakable walls, giving you chance to figure out how the system affects Labyrinth of Refrain‘s level design. Another dungeon that keeps breakable walls to a minimum, deliberately constraining the freedom you’ve grown accustomed to at that point, and leaving you to figure out how best to use the few walls you can break to circumvent the powerful monsters that patrol the hallways. The dungeon that follows goes the opposite direction, giving you a complex network of winding paths that’s almost entirely destructible, with free reign to mess up royally when it comes to RF management.

It seems a simple thing, the ability to break a wall in a game. But Labyrinth of Refrain puts it to work so brilliantly that it upends the whole structure of dungeon crawlers as we know them, while still providing the most captivating crawler experience imaginable. It’s that, more than anything else, that makes Labyrinth of Refrain such a remarkable game. 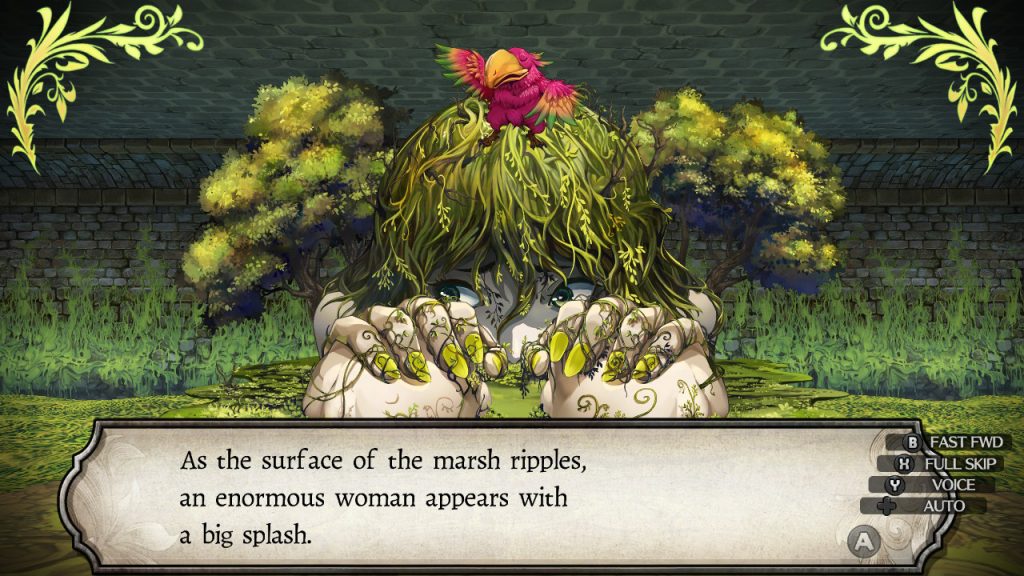 The battle system, too, looks to change things up, though not to the same degree. Usually, in a turn-based dungeon crawler like this, you control a squad of four or five fighters. In Labyrinth of Refrain, what would normally be a single character is coven consisting of up to eight (!) puppets. Only three puppets per coven can participate in combat directly—for a maximum of 15—but those in the support slots (up to five per coven) contribute indirectly through passive bonuses, and also earn a small share of experience after each battle.

How each coven is set up depends on what pacts you have set up. These scrolls determine how many slots are available to put puppets into, what skills the combat units can use, and what benefits come from the support squad. The pacts you find early tend to be limited to a single fighter and a single supporter, but those numbers gradually increase as you move through the game, allowing you to gradually get used to controlling your growing army. 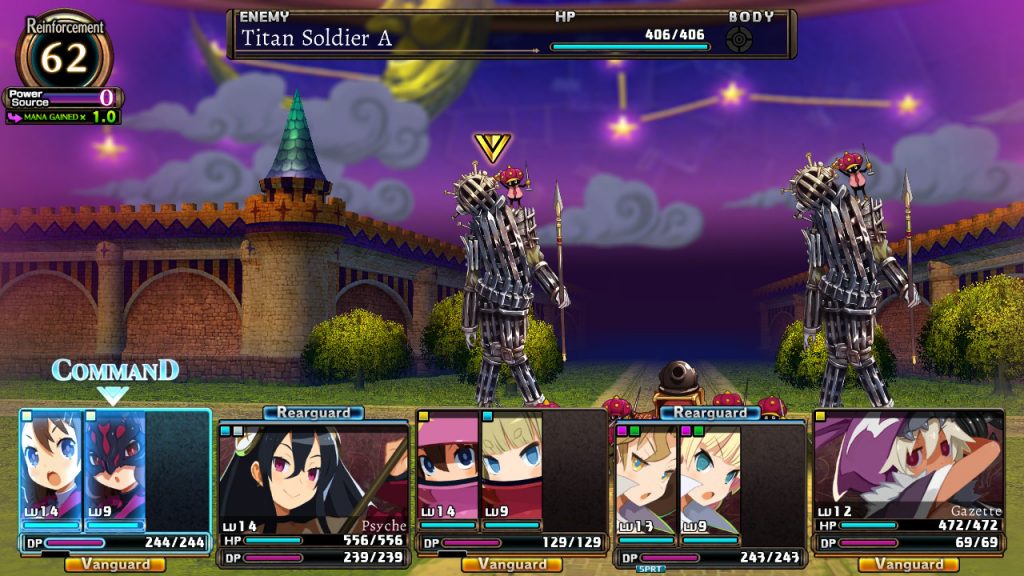 In combat, each coven acts as a single unit. With basic attacks, each fighter within the group attacks separately (though they share the same target you chose for the coven as a whole), and for magic and special skills, they pool their respective stats together into one big cast. If you want to control each puppet independently you can—and it can be a useful tactical option, especially in boss fights—but that costs RF. It’s a system that allows for almost infinite party setups, and a min-maxers dream.

I have one bone to pick with combat in Labyrinth of Refrain, though: the difficulty curve is completely erratic. Even playing on normal difficulty, I was able to auto-battle my way through the first couple of dungeons without a care in the world. Then, suddenly, a boss came along that required pitch-perfect group composition, a mastery of the nuances of the combat system, and a bit of extra grinding to boot. That’s fine when a game builds you up to that, but Labyrinth of Refrain is a flat road with a sheer cliff face at the end, and it follows that cycle throughout the rest of the game. 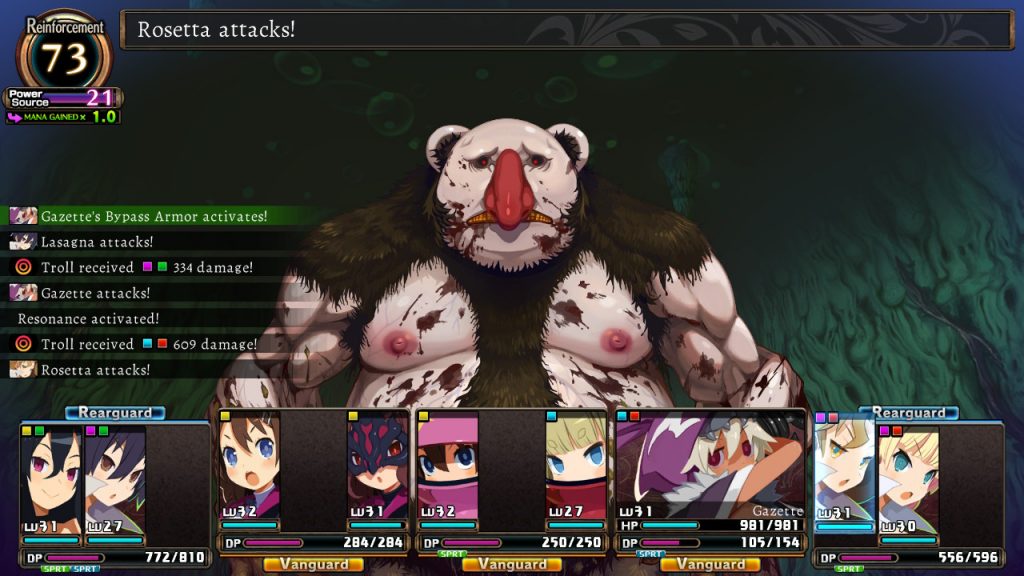 The context for all of this dungeoneering is that the witch Dronya has been commissioned by Refrain’s acting mayor to solve the labyrinth’s mysteries. No human can venture into the depths without being killed by a magical miasma, but with the assistance of a sentient tome, the Tractus de Monstrum—that’s you—and an army of puppet soldiers, Dronya is the one person who can get it done.

It’s a grand old fairy tale, though one that clearly channels the Brothers Grimm in its dark humour and unapologetically villainous characters (even the heroes). Such stories are deliberately unpleasant, yet enchanting in their unpleasantness, and that’s a balance that’s difficult to get right. It’s something that Tatsuya Izumi is a master of, though—as seen in Disgaea, in the first Witch and Hundred Knight, and, now, in Labyrinth of Refrain. 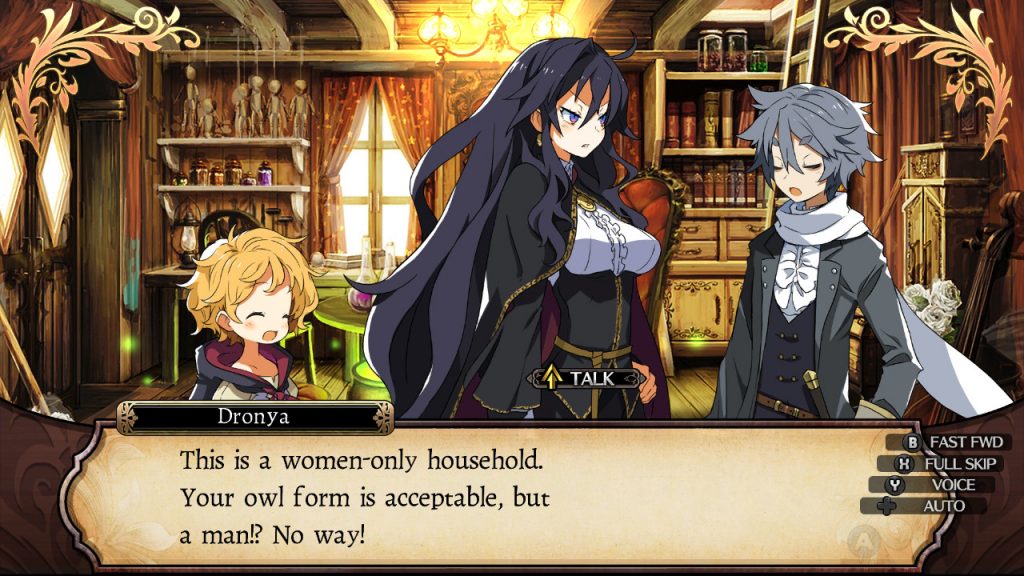 For all her careless violence and the way she bullies everyone around her, Dronya is an oddly captivating—even likeable—anti-hero. She’s cruel, but her cruelty has style and flair. She freely admits to being a bad person (“I’m a witch, after all!”) and that she enjoys making people miserable, but the humorous edge to everything she says and does keeps her cruelty from crossing the line into outright offensive. Every now and then, you even see a glimmer of humanity, though she’s quick to quash it. That’s true of most other characters you meet, too, whether they’re an addled sheep farmer or a Red Riding Hood lookalike who seems to have far more in common with the big bad wolf.

Labyrinth of Refrain isn’t wholesome family entertainment, and I don’t think anyone would expect that from it. But it nails the black humour that’s often missing from attempts to capture what made the Grimms’ stories work as well as they did, and that makes for a world that’s easy to get lost in, ugly though it may be.

A lot of the credit has to go to NIS America’s localisation team, too. In tone and character, the English script is absolutely perfect, and it’s brought to life by top-notch voice work. I think a lot of people have written NISA off after what happened with Ys VIII, but they still have what it takes, and Labyrinth of Refrain is proof. 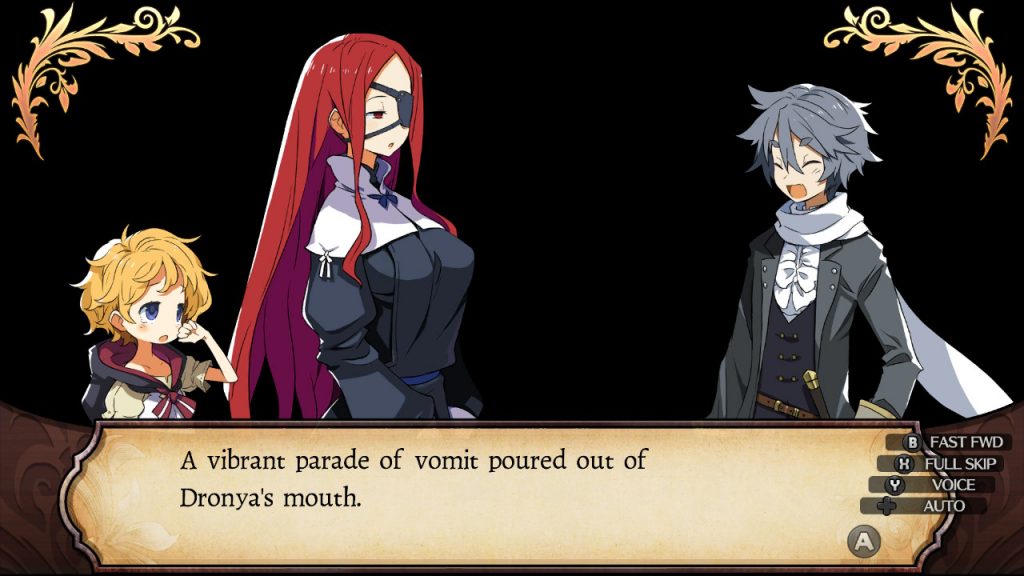 In a generation that’s been very good to dungeon crawler fans, Labyrinth of Refrain stands out as one of the best, with a fairy-tale narrative that channels the bleak fantasy of the Brothers Grimm in a way that’s funny and charming despite its depravity. But it’s the wall-breaking mechanic that really sets this game apart, changing the rules of the genre so fundamentally that this is unlike any other crawler you’ve played—but every bit as exciting.