This won’t come as a surprise to anyone who’s played the first game, but La-Mulana 2 is hard. Tricky platforming and cryptic puzzles will stretch your reactions and problem-solving ability, while cruel traps await any adventurer who gets to reckless. La-Mulana 2 may be more streamlined in its design, but don’t be fooled into thinking it’s an easy game. It’s not. That’s why I’m writing a first impressions piece, rather than a review: I’m nowhere near finished, and I don’t expect I will be for a long, long time.

It’s also a very good game, and I say that as someone who generally takes issue with the cult of difficulty that’s blossomed over the last few years. La-Mulana 2 is brutal and unforgiving, but as long as you’re content to play on its terms, it’s an incredibly satisfying experience—even when it’s kicking your ass. 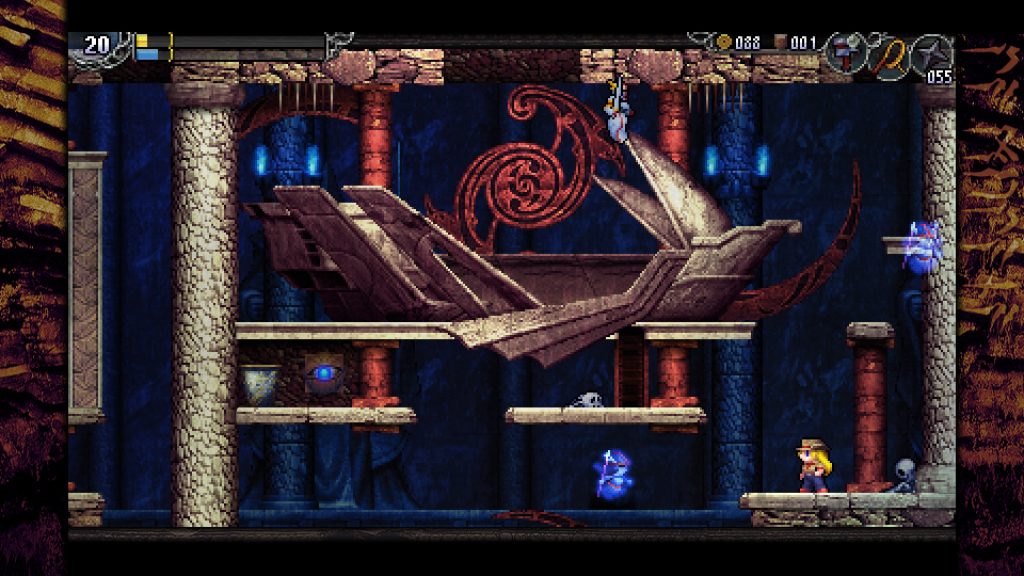 Like it’s predecessor, La-Mulana 2 is a metroidvania that’s more than a little inspired by Indiana Jones, right down to protagonists sporting Indy’s iconic fedora and a whip as their choice of weapon. This time, our hero is one Lumisa Kosugi, the daughter (maybe) of La-Mulana protagonist Lemeza. Following Lemeza’s exploits, the La-Mulana ruins have turned into a tourist trap managed by a particularly creepy old man, but the sudden appearance of monsters has been bad for business. Thus, he calls in Lumisa, and she soon discovers “the other La-Mulana”, Eg-Lana, beneath the first one.

To go right along with that theme, you’ve got an old ruin full of all manner of deadly traps that’ll quickly end a too-eager tomb raider, but quick wits and creative thinking will let you figure out the secrets of Eg-Lana.

To wit: very early on, there’s a platform that I’ll give way if you step on it, dropping you down onto some spikes below. Depending on how much damage you’ve sustained from the monsters leading up to that trap, you may or may not die from it, but you’ll at least lose a big chunk of your limited health bar. If you’d stopped to read a message pinned to a corpse near the spikes—”‘From the top down’ is the basics of ruin exploration. If you fall down to the bottom first and can’t get back up, you’re screwed.”—you might be suspicious of trapdoors in the vicinity, though the clue is deliberately vague. So it goes with La-Mulana 2‘s myriad of traps: a lot of pain for the careless, but with plenty of clues to help a smart archaeologist stay safe. 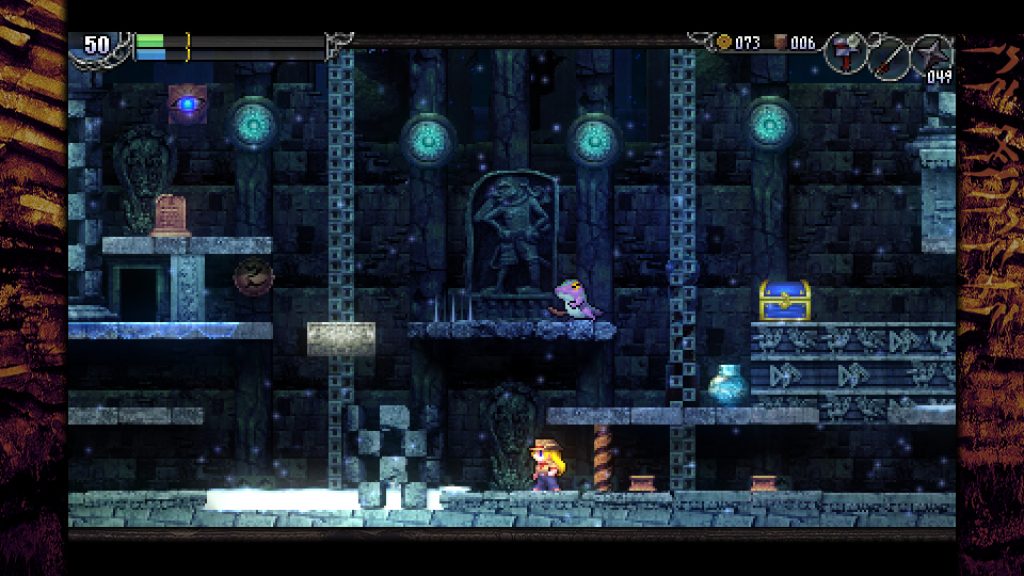 So it goes with the puzzles that litter the ruins, too. Like many a metroidvania, you need to find tools and artifacts that can help you activate mechanisms and move around, but when and where to use different items is rarely self-evident. Again, you’ll need to decrypt the many clues to be found on corpses and tablets throughout the ruins, and they get really fiendish as the game goes on.

Boss fights take things to another level, demanding perfect platforming, a good awareness of your surroundings, and accurate shuriken-throwing. I’ve fought a two real bosses and a handful of mini-bosses so far, and all have been brutal.

It’s not all doom and gloom, though. La-Mulana 2 isn’t just bullshit difficulty out of a misguided attempt to recapture the “glory days” of NES; as long as you’re concede to playing on the game’s terms, you can slowly inch your way forward, and that’s where the game is at its most satisfying. 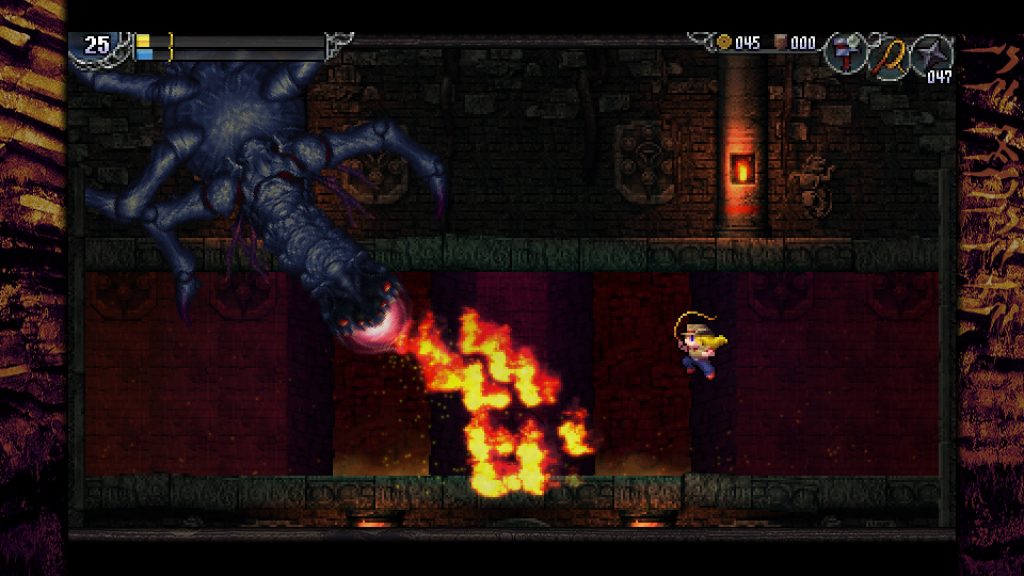 Early on, you get an item that allows to teleport to just about any save point you encounter, and being content to use this liberally to escape a dangerous situation when your health’s running low is crucial to success. You can explore a new area to get a feel for its dangers, zoom back to the base—and its life-giving spring—when things get to tough, and then jump back to a save point near where you were before, armed with the knowledge gleaned from previous mistakes.

Furthermore, La-Mulana 2‘s early areas are a lot more clear than those of its predecessor, and I think that’s a good thing. La-Mulana came out swinging right from the start, and a clue within the game’s manual—something long out of vogue, especially for digital-only game—was all but vital for solving a certain puzzle within the very first area. By contrast, while La-Mulana 2 doesn’t pull its punches with traps, the early puzzles and clues, at least, are somewhat more straightforward. It doesn’t take long for that to stop being the case, but La-Mulana 2 is at least a bit better at onboarding new players.

Lumisa is a far more agile adventurer than her old man. Lemeza’s lack of control while jumping was one thing that I just found too archaic about La-Mulana (and it’s one of the reasons I’ve still never completed that game, to this day), but Lumisa has a lot more airborne mobility. She can, for example, jump out from a ledge and swing back to land on another directly above it, something Lemeza couldn’t dream of doing until he got his double-jump upgrade. She can also grab onto a ladder in mid-jump, which hasn’t been a factor in any platforming puzzles I’ve encountered so far, but is all kinds of convenient for getting around. 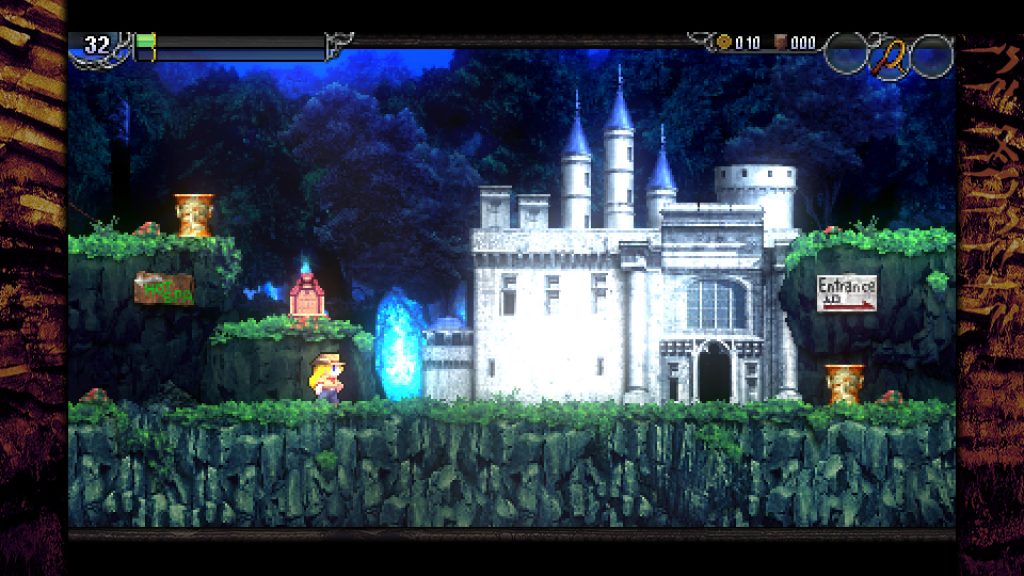 These little touches help make La-Mulana 2 feel ever so slightly more modern, while still retaining the retro charm of the previous game. This game offers everything that La-Mulana did, including the brain-bending difficulty, but with some of the more frustrating parts ironed out. It’s still challenging enough that I don’t see myself being able to finish it until long after better players than me have put together some very detailed walkthroughs, but time I’ve spent with La-Mulana 2‘s obtuse puzzles so far has been oh-so satisfying.

LaMulana 2 is developed by Nigoro and published by Playism. It’s available now for PC.