Rhythm games tend to stick closely to a similar format: a series of note markers fly across the screen, mapped to the accompanying track, and you have to press buttons to match. There’s been a lot of variety in terms of different input mechanisms, from regular controllers to Dance Dance Revolution‘s dance mats to all manner of makeshift instruments. Other games have mixed things up by blending rhythm elements into other genres, but the fundamentals remain the same: the game tells you what buttons to press and when, you do your best to match that.

Gal Metal, by contrast, casts you as the drummer of an all-girl high school metal band and leaves the choice of buttons up to you—and in doing so, it creates a far more lifelike drumming experience than I ever would have expected. You still have to stick to the tempo of your chosen track (you’re a drummer, after all) but instead of being rewarded for precisely matching a set beat map, you’re rewarded for creativity in how you string different rhythm lines together.

Here’s how it works: a song starts with a quick one-two-three-four to give you the tempo, and then you’re more or less left to freestyle your drumming; as long as you’re in time, you’ll get points for each bar, which more complicated rhythms delivering more points. Mixing and matching different lines builds a combo multiplier, increasing your score exponentially, and there are plenty of bonuses to be earned by finding “secret rhythms” within a track and staying on beat. 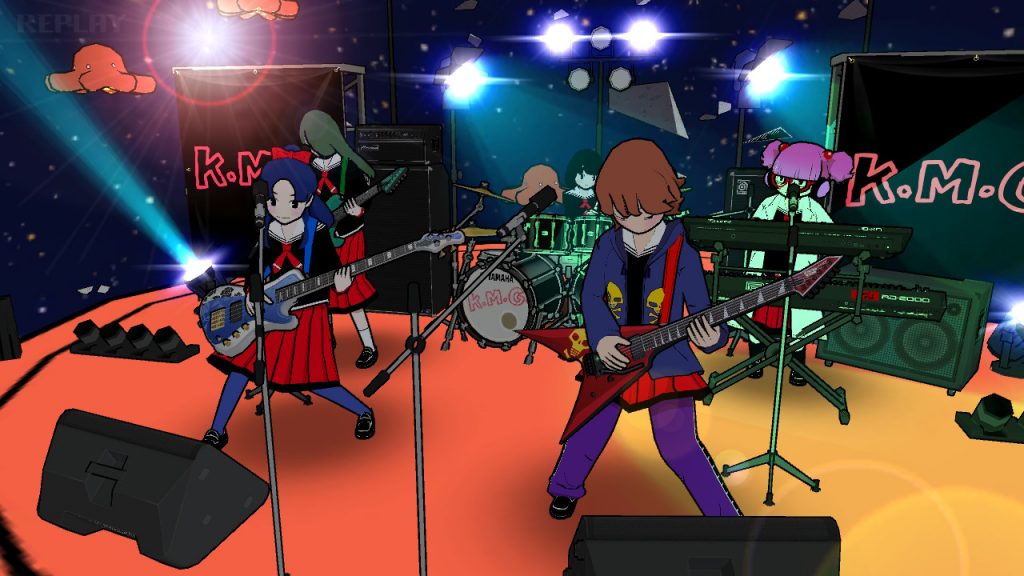 This might seem a daunting task, especially if you’re not someone with some amount of experience playing drums or at least with some degree of rhythmic sense. At first glance, it is—especially if you just dive into free play without first playing the story mode, which works like an extended tutorial. But so long as you know where to look, Gal Metal has plenty of support to get you up to speed, from an expansive library of different drum rhythms (named loosely after the well-known metal songs that they mimic, which is a nice bonus for any metalheads in the crowd).

There’s a practice mode where you can practice those rhythms, either by yourself (accompanied by a metronome) or in a jam session with your AI bandmates. These are a great way to perfect your moves and build up your arsenal, all the better to pull out some killer combos in your next “live” performance.

In keeping with its goal of letting you live out your metal drumming fantasies, Gal Metal lets you use use your Joy Cons as drumsticks, effectively air-drumming your way through the game. It takes some getting used to—without actual drums before you, you need to find the sweet spot where the motion controls register a hit—but once you get into the groove, this is easily the most exciting way to play. 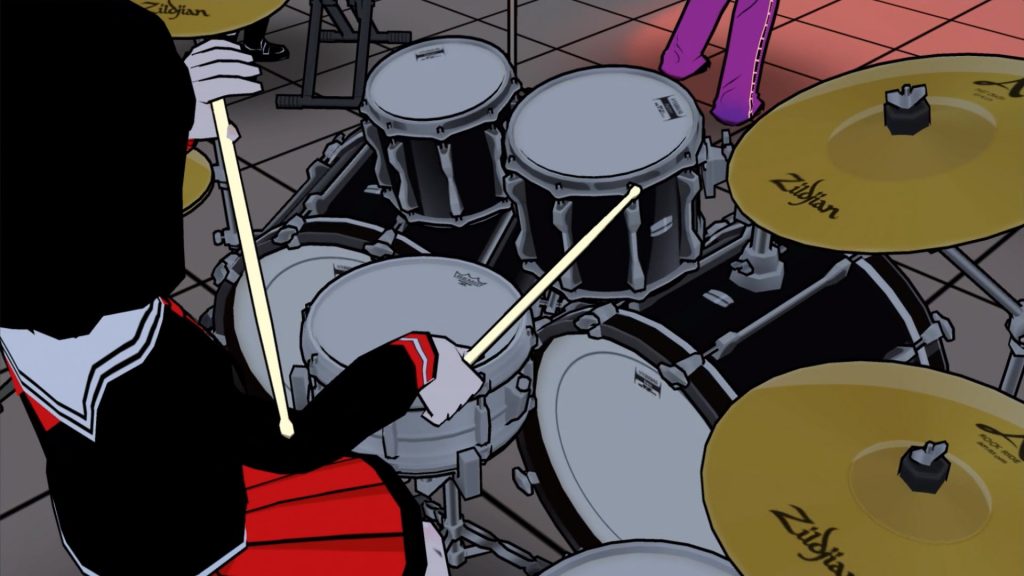 (One word of advice, though: make sure you have rumble turned on, because feedback it gives is vital for getting your timing right with motion controls. I spent a few disastrous hours thinking the motion controls were just completely broken, until I realised I’d turned off rumble at a system level some months ago.)

Enjoyable as the motion controls are, it’s nice to also have the option of playing with buttons or the touchscreen. They’re more accessible, and often more convenient for handheld mode—you can’t exactly bang the imaginary drums on a crowded train. They’re just that little bit more precise, too, which comes in handy when you’re chasing those high scores. Finally, they give you a full drum kit to play with, instead of just the snare, tom, and cymbal you get with motion controls. There’s no material benefit in terms of points scored, but it does at least open the door wider to more creative drumming. 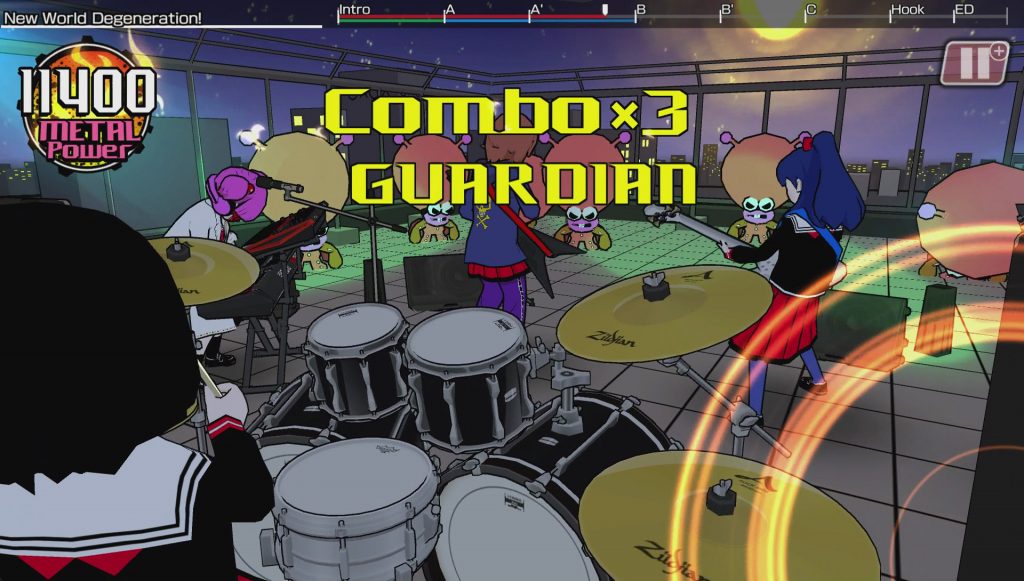 The drumming fun is what most people would come to Gal Metal for, I suspect, but it also offers a far more substantial story mode than your typical rhythm game, and it’s a fantastic mix of oddball humour and high school slice of life. Kichijoji—a district within Musashino City, Tokyo, described by the game as a place where nothing of interest ever happens—suddenly becomes very interesting indeed when octopus-like aliens begin invading. They’re seeking revenge due to a headbanging epidemic that’s proving fatal for many of their species, resulting from a metal recording that accidentally found its way onto the Voyager Golden Record. Therein lies the secret to the aliens’ defeat: they’re vulnerable to the power of metal.

Enter Kichijoji Girl’s High School’s metal club. Lead by drummer Rinko Hoshino—who was briefly abducted by the aliens—the band sets out to stop the aliens once and for all.

But that’s just the start. Each new chapter ramps up the stakes and takes the story in ever more bizarre directions; at one point, the band literally finds themselves engaged in a battle of the bands against a black hole. This all unfolds through colourful motion comic cutscenes, with a sketchy art style that just serves to make the events even more ludicrous. It’s nuts, to put it simply, and wonderfully so; I don’t think a chapter went by where I didn’t burst out laughing at some oddity or other. 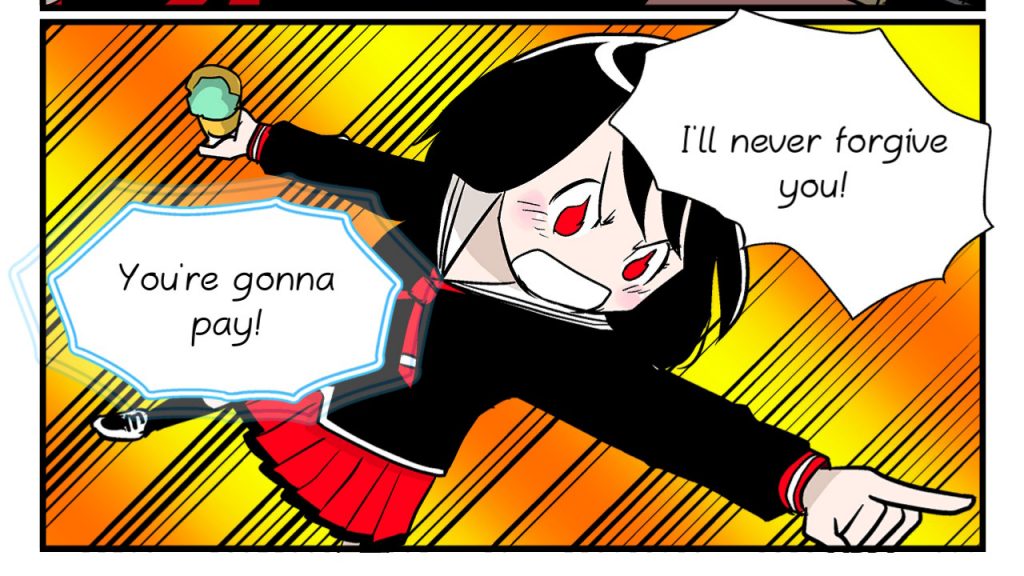 At the same time, it’s surprisingly earnest in telling a timeless story about the power of friendship. Metal may be the aliens’ weakness, but it’s only through the bonds shared between the members of the band that that weakness may be exploited. It’s a joy to see how those friendships grow, through both the main cutscenes and light life-sim elements in between missions.

(Oh, also, there’s a plot thread where a boy from another school finds his soul merged with Rinko’s, and them both occupying Rinko’s body. It serves little purpose, other than an unnecessary way of injecting a male player-insert character into a wonderful story of girl power.)

If there’s anything that might let some players down, it’s the choice of music. At just 13 songs in the base game (and five more available as DLC), the track list is relatively light, and they’re all metal arrangements of public-domain pieces that are far from memorable. In any other game, this would be a deal-breaker, but in Gal Metal, I found it to be little more than a minor annoyance. It’s not about meticulously following a catchy song; it’s about making your own metal magic, and so long as there’s a beat—which there always is—you can do just that. With that freestyle structure and wonderfully offbeat story, Gal Metal is a game that’s a lot more fun, on some primal level, than most other rhythm games. I love the genre’s usual focus on mastery through, and there’s an element of that here too, but for the most part, Gal Metal is just about rocking out and having a great time. In that, it’s big success.