I’m pleased, if somewhat surprised, that Code of Princess got the remastering treatment. It’s an enjoyable game, but one that never could realise its vision on 3DS. Now, with Code of Princess EX for Switch, it’s getting a well-deserved second shot at life, no longer hampered by the limitations of 3DS hardware.

Code of Princess EX is something of a parody of classical Western fantasy games. Framed around a simple story about an evil deity with visions of world destruction, it mostly serves to poke fun at every fantasy game cliche from “bikini armour” to level grinds, and it’s this that injects an otherwise shallow story with a great sense of personality.

Princess Solange, the poster-child for the game, wears a metal bikini that makes Red Sonja look positively conservative. But it doesn’t simply serve as titillation; a running gag throughout the game is comments from Solange’s acquaintances about how impractical it all is, while she notes repeatedly that it’s literally the only clothing she owns. 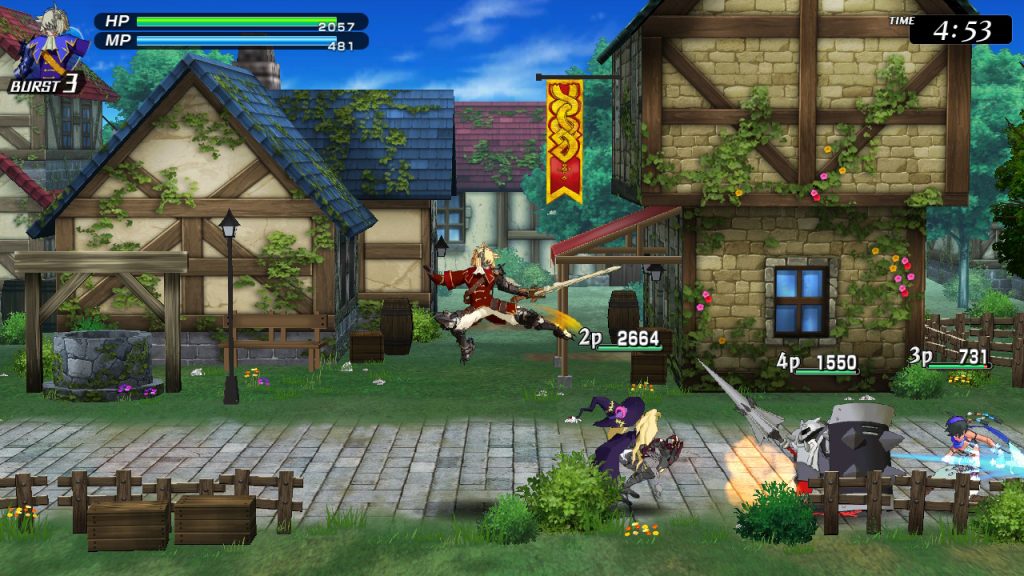 Parody always runs the risk of just reinforcing the thing it’s meant to be satirising, and Code of Princess EX doesn’t always walk that line well—one early exchange between Solange and her father comes across as particularly creepy, rather than humorous. But when it lands, the Code of Princess delivers a funny, biting criticism of one of fantasy’s oldest tropes.

Then there’s the supporting cast. Zozo the necromancer is a particular delight: having lost her original body a long time ago, she’s taken to exhuming corpses and using them to patch together her own form with “spare parts”. She looks like a Frankenstein’s Monster (but don’t you dare call her a zombie!)

Elsewhere, you’ve got Allegro, an immature, electric guitar-wielding bard who is convinced that he’s just a few experience points away from becoming a sage. His childish antics, and the rest of the party’s eye-rolling frustration with them, are the source of plenty of jokes throughout game, and they somehow never get old. 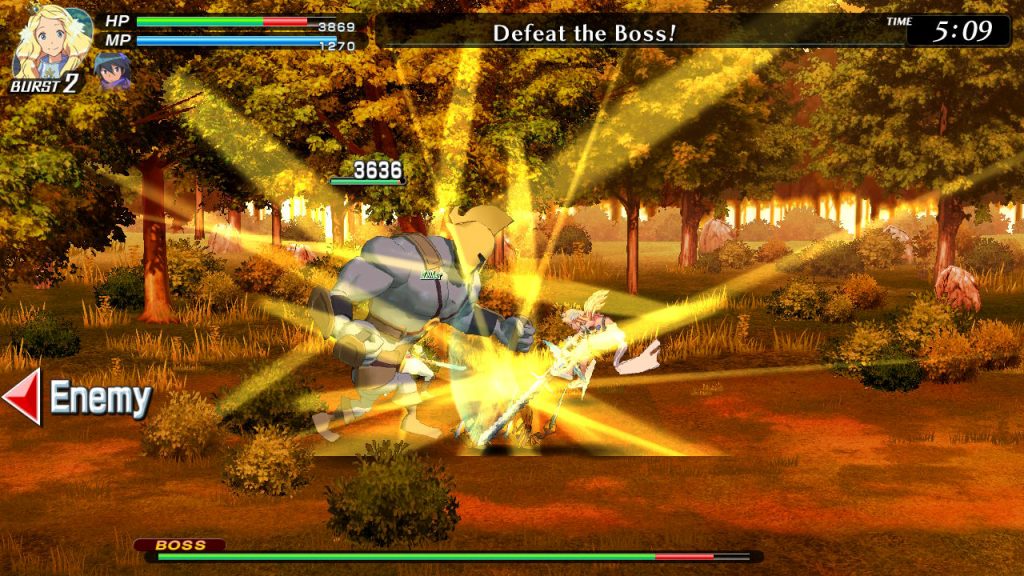 There’s Ali, a tomboyish rogue and the former leader of a gang of thieves. There’s Tsukikage, a hopelessly romantic samurai whose flirtations seem to always fall on deaf ears. There’s Helga Wilhemina, or “Sister Hel”, a paladin-nun who takes her oath of godliness far too seriously for her own good.

That’s just a few of the eccentric characters in Code of Princess EX, and one of the nice touches about the remaster is that far more are playable in the main game. The original game had only four playable characters in its story mode—Solange, Ali, Zozo, and Allegro—with a handful of side characters and enemies limited to free play and multiplayer modes. In Code of Princess EX, all characters that feature in the story are playable in the levels that feature them, which opens the door to much more variety as you play through the core game.

And fantasy parody aside, that core game is really what stands out about Code of Princess EX. At its heart, it’s a beat-’em-up game, but a heavy influence from RPGs and fighting games brings a lot more depth to the hack-and-slash combat. 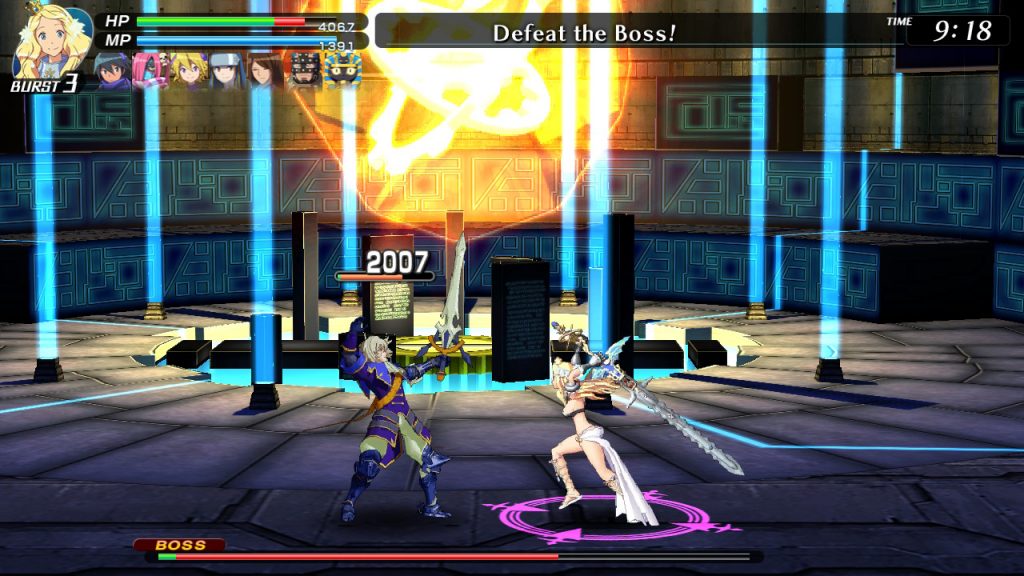 By beat-’em-up standards, small fry enemies are relatively few in Code of Princess EX; instead, most levels are designed around one (or more) tanky mid-bosses. As such, being able to chain together your attacks into big, juicy combos—ideally with a lot of juggling in the air, to limit the enemy’s opportunities to fight back—is the cornerstone of success in this game.

To that end, each character has their own suite of different attacks and special moves. The way they combine and feed into one another makes them feel more like a Guilty Gear-style fighting game than a run of the mill hack-and-slash. Having more characters available within the story mode makes that all the more apparent, because it no longer feels like half the game’s roster are locked away in a mode that feels like an afterthought.

That said, Code of Princess EX does suffer from an erratic difficulty curve. The early levels don’t really do much to encourage players to explore the intricacies of the combat system, until a couple of particularly frustrating boss fights force you to suddenly learn to use every tool at your disposal—and even then, you might want to take some time to grind a few levels just to give yourself a fighting chance. A couple of other bosses later on provide similar roadblocks, but oddly enough, the final boss in the game poses little threat. In fact, the relative ease with which she can be defeated makes her a prime candidate for grinding levels for Code of Princess EX‘s bonus challenges. 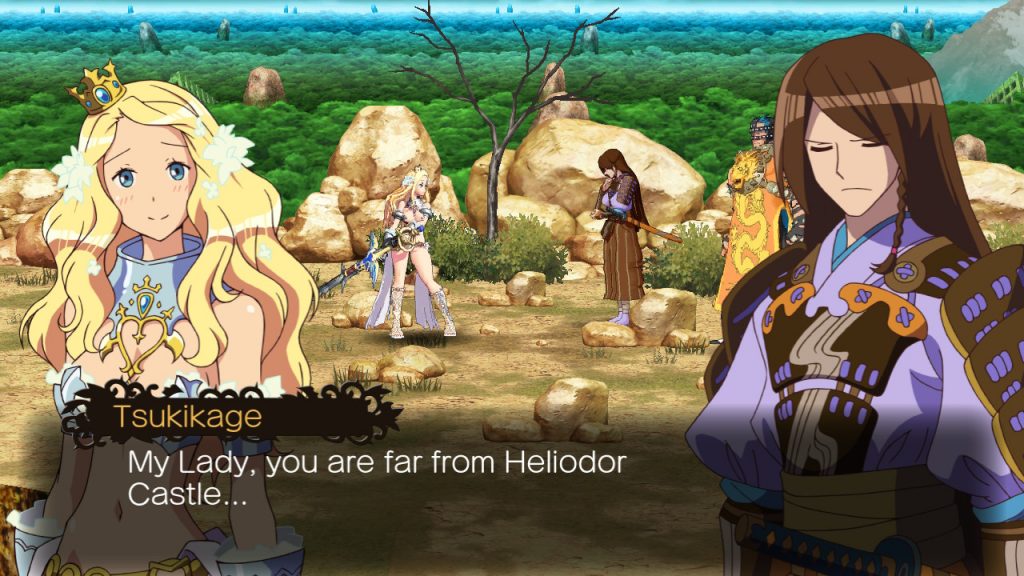 “Grinding levels”, I hear you ask? That’s right, light RPG systems play role in Code of Princess EX, though arguably less so than it did in the original game. The manual levelling system from the Code of Princess—in which you manually assigned stat points upon level up, and could customise characters’ builds as a result—is done away with in the remaster, but I think that’s for the best. Stats still play a big role, but each character grows naturally according to their role, removing a lot of downtime and busywork between stages.

You can still customise your fighters to some extent with equipment. There’s a wide array of different pieces of gear to be found throughout Code of Princess EX, each of which increases and decreases different stats. On top of that, most items have various special effects, like increasing the damage you to certain classes of foe, or giving you some health regeneration when you use certain special moves.

Between the wide range of different characters and the extensive armoury with which to augment them, there’s plenty of variety to Code of Princess EX, and plenty of reason to come back. I must admit that I haven’t played the original Code of Princess myself, but by most accounts, it struggled with the 3DS hardware. Limited screen space and sluggish performance made it hard to enjoy the fast-paced action at the heart of the game, and the eccentric character designs—courtesy of the extremely talented Kinu Nishimura, of Street Fighter fame—never really translated well to the game itself.

That’s no longer an issue in Code of Princess EX, which has the benefit of the Switch’s power. There are still moments of slowdown, but they’re uncommon and, in my experience, do nothing to hamper the play experience. (If anything, they’re a chance to catch your breath, like the “slowdown” that’s fairly standard in bullet hells.)

Whether you’re playing in handheld mode or docked, the bigger display means that the UI no longer feels cramped, and the characters spring to life as much in the middle of a melee as they do in cutscene portraits. The environments are stock-standard fantasy fare, but they’re crisp and clean, giving you a field to fight upon without becoming a distraction. 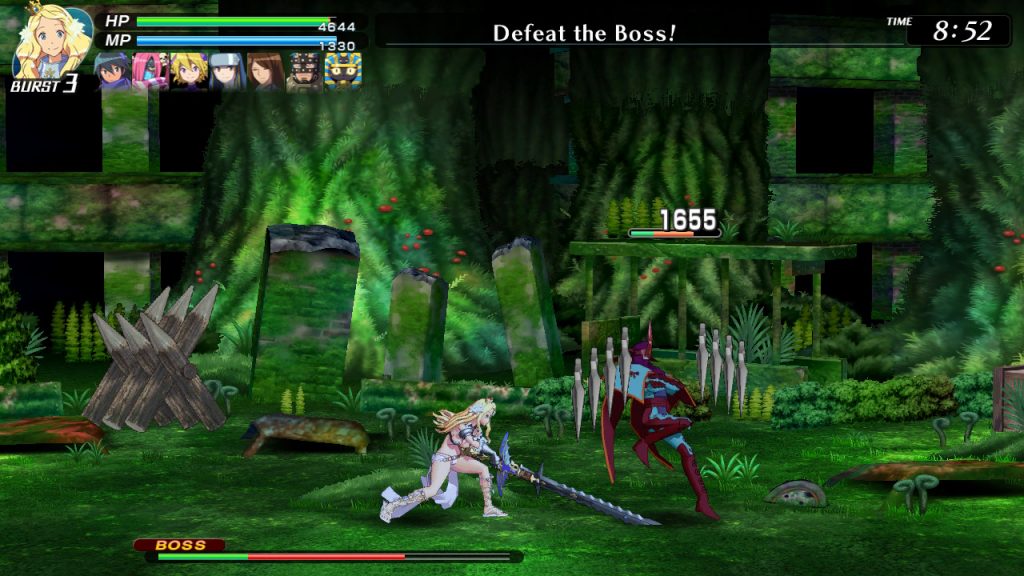 The end result is a game that won’t be for everyone, but is offers a whole lot of fun for those in its target niche. It’s a solid beat-’em-up with deep combat and a nice RPG overlay, eccentric characters, and an appropriately silly story that looks no further than poking fun at some well-worn fantasy tropes.

With the oddball crossover fighting game Blade Strangers around the corner, now is the perfect time to reintroduce Solange, Ali, and the rest of the gang to the world. Code of Princess EX is just the way to do that.