Blazblue: Cross Tag Battle may not be the strangest crossover fighting game of the year—that award almost certainly goes to Blade Strangers, but it’s up there. There’s some sense in the madness of a Blazblue and Persona 4 Arena mash-up, given both those games come from the same developer. Under Night In-Birth fits in, too, thanks to the Arc System Works publisher connection. But before Cross Tag Battle‘s announcement last year, I have imagined Rooster Teeth’s 3D pseudo-anime RWBY being in that same mix.

I certainly wouldn’t have expected a character from RWBY—a cartoon I can’t stand, to be frank—to be my number one in a game that also has characters from one of my favourite games of all time, but here we are. Thanks to a surprisingly good transition to 2D and some odd choices among the rest of the roster, Ruby Rose is my scythe-wielding goofball of a main character, with a partner that’s still in flux because nobody else seems to be quite on the same level.

That the RWBY characters in Blazblue: Cross Tag Battle look so good is testament to Arc Systems Works’ talent with 2D sprite-based animation. The rest of the fighters all draw on pre-existing assets from other games with some tweaks for visual consistency, but Ruby, Weiss, Blake, and Yang have all been redrawn from scratch in 2D form, based on a 3D computer-generated cartoon. They’re a natural fit with the rest of the bunch, and radiate style and personality that RWBY itself can’t match. That’s not to say that the Blazblue, Persona, and Under Night In-Birth characters don’t also look great. Across the board, the sprite work in Cross Tag Battle is detailed and full of life. From their flashiest attacks to the subtle little idle movements, there’s energy in every animation. Arc System Works may have moved to cutting-edge cel shading tech for their flagship games, but its 2D animations are as good as ever.

This studio also knows 2D fighting games perhaps better than any other, and that’s clear in the way Blazblue: Cross Tag Battle keeps up the depth and high-speed antics typical of anime fighting games, while also keeping things approachable for newcomers.

Auto-combos gave become fairly common in Arc’s games, and Cross Tag Battle is no exception. By mashing away on the light or medium attack buttons. your character will automatically string together a series of attacks that look impressive and do good damage. In this game, though, they’re not simply an “easy mode” that’ll be forgotten about one you learn to do harder-hitting, more challenging combos; they’re viable in their own right, and form the basis of a lot of the trickier stuff. 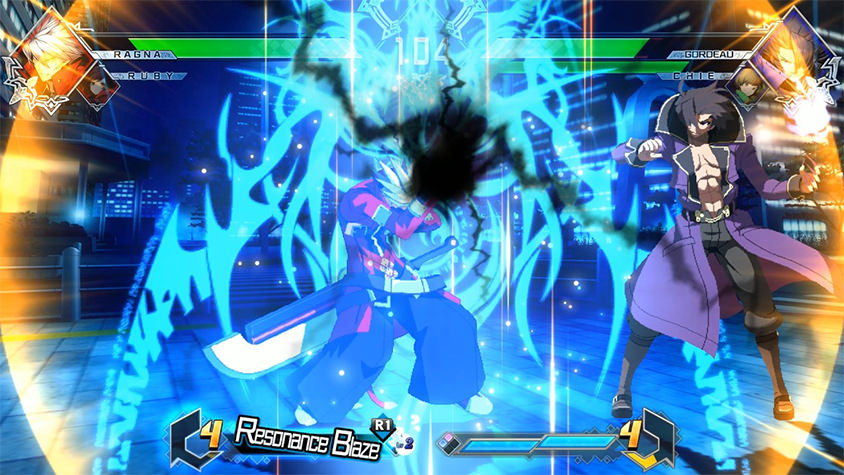 Everyone in Cross Tag Battle can pull out an invincible counter attack at the press of a button. They work like Street Fighter‘s dragon punches and similar moves that have been in 2D fighting games forever: a period of invincibility at the start makes them good for countering other attacks, and they lead to big damage if they hit, but a blocked or whiffed attack leaves you wide open. The difference is that in Cross Tag Battle, everyone has one, and they don’t require any special joystick motions to pull out.

On that note, joystick motions across the board are limited to single quarter circles–no dragon punch motions, 360s, double quarter circles, or any other such commands commonly seen in fighting games. That won’t be a big deal for people used to the genre, but for beginners, it removes what can be a big barrier. It also makes playing on game pad (rather than an arcade stick) a lot more manageable.

At the same time, there’s a lot of depth to Cross Tag Battle’s 2-on-2 tag team combat. Team composition plays a big role; the right pair of characters can cover one another’s weaknesses and become more than the sum of their parts. With three assist moves each, partner characters are versatile, and you don’t have to pick between, say, an assist that’s good for extending combos and one that can cover you for a safer approach—most fighters will have both in their arsenal, and others besides. There are still characters who naturally complement one another, but the range of options for a viable team are much wider than they often are in tag-based fighters. 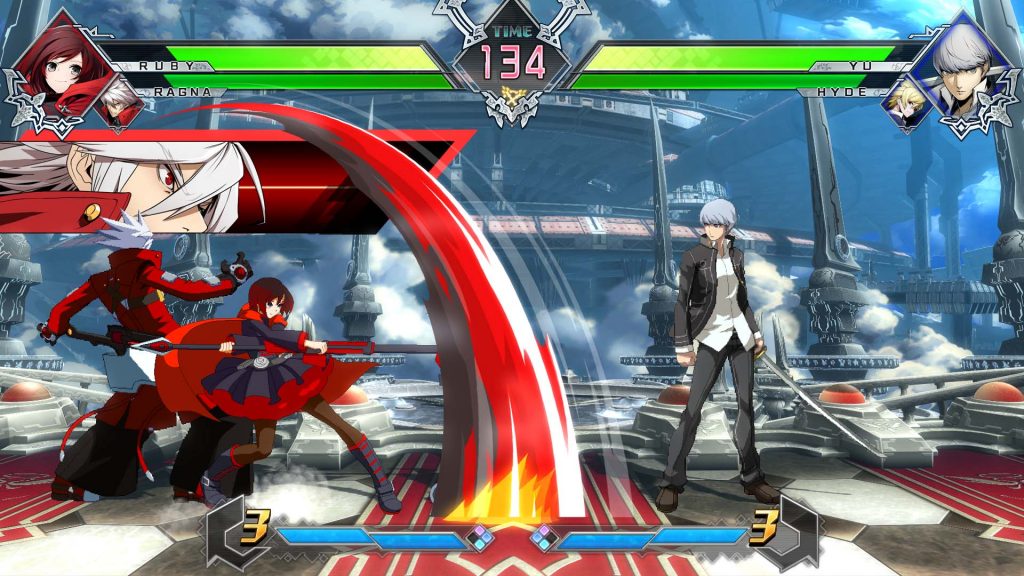 In short, Blazblue: Cross Tag Battle has a great fighting system at its core. Where things start to fall apart, though, is with the character choices for the game. I don’t want to weigh in on the DLC controversy—I honestly don’t think it’s a big deal—but the characters Arc System Works has picked for the base roster leave something to be desired. The main characters from each franchise are to be expected, but they all sport a similar “well-rounded main character” fighting style.

The others offer a bit more combat variety, but they tend to be the least interesting representatives of games known for their creative designs. Why would you limit Persona 4 Arena characters to Yu, Chie, Yosuke, and Yukiko, when you could pick the likes of Elizabeth, Teddie, and Rise? Where are Under Night In-Birth Yuzuriha, Wagner, and Phonon? The DLC will go some way to addressing, but the most noteworthy characters are still missing.

It’s also frustrating to see and even fight against DLC characters in the story mode, when they aren’t even available to purchase yet. I’ve no issue with extra characters as DLC, even if they’re “complete” when the game ships, but so brazenly drop them into a core mode like that seems a step too far. 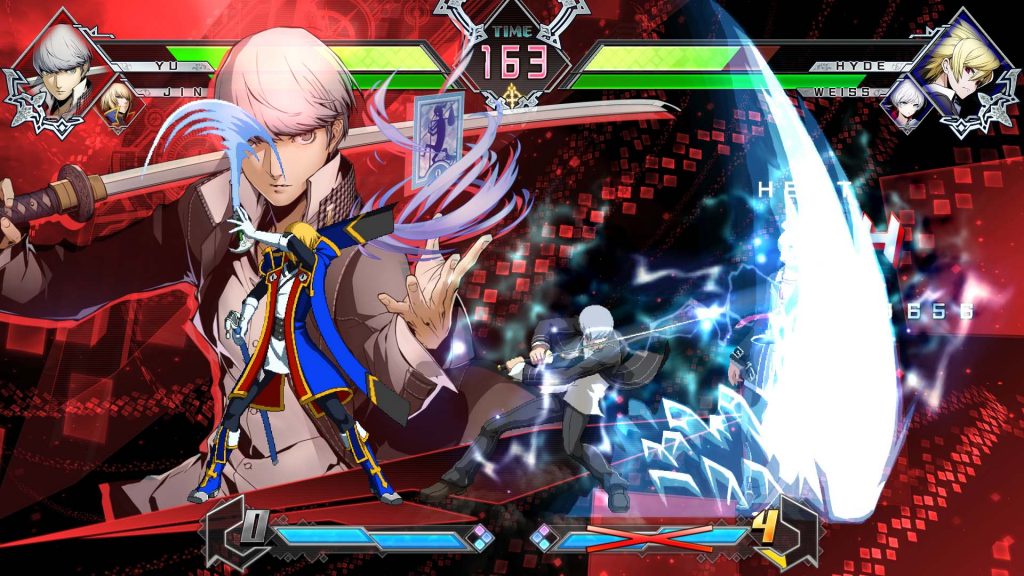 Speaking of, the story mode in Cross Tag Battle also leaves a lot to be desired. Blazblue, Persona 4 Arena, and Under Night In-Birth all boast strong narratives in a genre not known for such, but none of that carries through to this game. Characters from different worlds all get mysteriously transported to a new world, told to fight one another and collect “Keystones” if they want to go home, and ultimately end up fighting a weird alien thing with goals of world domination. The interactions between characters are occasionally entertaining, but the overall story is flat and somewhat pointless.

Beyond the story, there’s the usual array of game modes: a tutorial, training mode, combo trials for each character, ranked and unranked multiplayer matches, and a limited survival mode. (Oddly, there’s no arcade mode). It’s not as bare-bones as Street Fighter V was at launch, but it still feels like something’s missing, especially compared with how feature-rich Arc System Works’ games usually are. 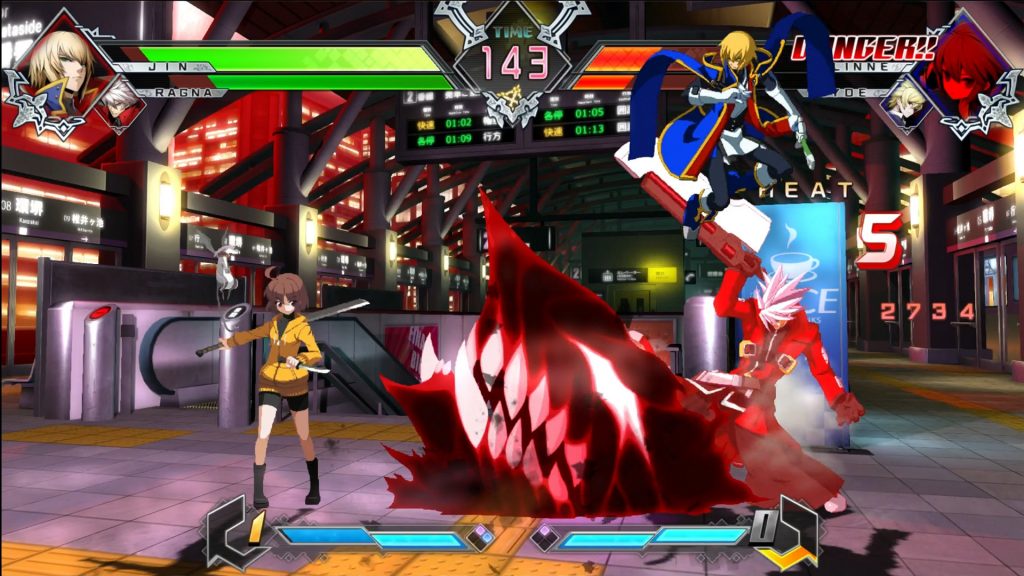 That leaves Blazblue: Cross Tag Battle in an odd position. It’s fighting system goes to great lengths to make itself approachable for newcomers, without compromising the depth that Arc’s fighting games are known for, but there’s little to appeal to players who aren’t looking to just spend all their time in multiplayer. It looks great and plays nicely, but conservative character choices leave the base roster feeling very dull compared to the games that Cross Tag Battle draws from.

But hey—it made me appreciate RWBY at least a little bit, and that’s something I never thought would happen.