It didn’t take long for Assassin’s Creed Origins to blow me away. It wasn’t the game’s stunning re-creation of Ptolemaic-era Egypt that did it. It wasn’t the meticulous authenticity or the impressive production values. No, the thing that sold me within minutes of firing up the game was when main character Bayek opened his mouth and spoke in his beautiful African accent.

I can’t remember another time that I heard an authentic African accent in a game—not a white South African accent, or an Afrikaans accent, but the sort of accent you hear from a native speaker of one of Africa’s thousands of languages when they speak English. Obviously, there are a lot of different dialects, but they share a lot of commonalities, and African accents, collectively, are unlike any others in the planet.

To hear that in a big-budget video game, and not as a “joke” but as a genuine attempt to ground the dialogue in reality, it’s a wonderful thing. Abubakar Salim, who played Bayek in the game (in his first video game role, no less!) deserves all kinds of praise for his performance. The second thing Assassin’s Creed did to blow me away happened not much later. After an introductory tutorial sequence that saw Bayek escape from an ancient temple, he returned to his home in Siwa Oasis for the first time in years. In reuniting with old friends and family, the game showed the burly, fierce, ruggedly handsome Bayek as a gentle, sensitive, caring soul. The game took a character who at first glance looks like the quintessential hypermasculine Game Hero™ and let him show emotional vulnerability in the opening moments.

After that sort of introduction, I knew that I was in for something special. The rest of the game more or less follows the Assassin’s Creed formula, but with a degree of finesse that the series hasn’t really seen before. The story is a familiar one: a tale of one man’s violent revenge against a corrupt state, for reasons both personal and political. But because of the effort put into the characterisation of its cast—particularly in those early moments, but throughout the rest of the game at well—is a far more compelling version of “the Assassin’s Creed story” than we’ve seen to date.

As always, it’s the world that’s the real star of the show. Assassin’s Creed Origins takes place in 49 BCE Egypt, towards the end of the Ptolemaic era. This is a fascinating setting not just because of the issues and society of the day, but in how it positions the game’s characters in relation to history. For us, playing the game in 2017, 49 BCE is certainly ancient, but by that point “Ancient Egypt” was already a few thousand years old. 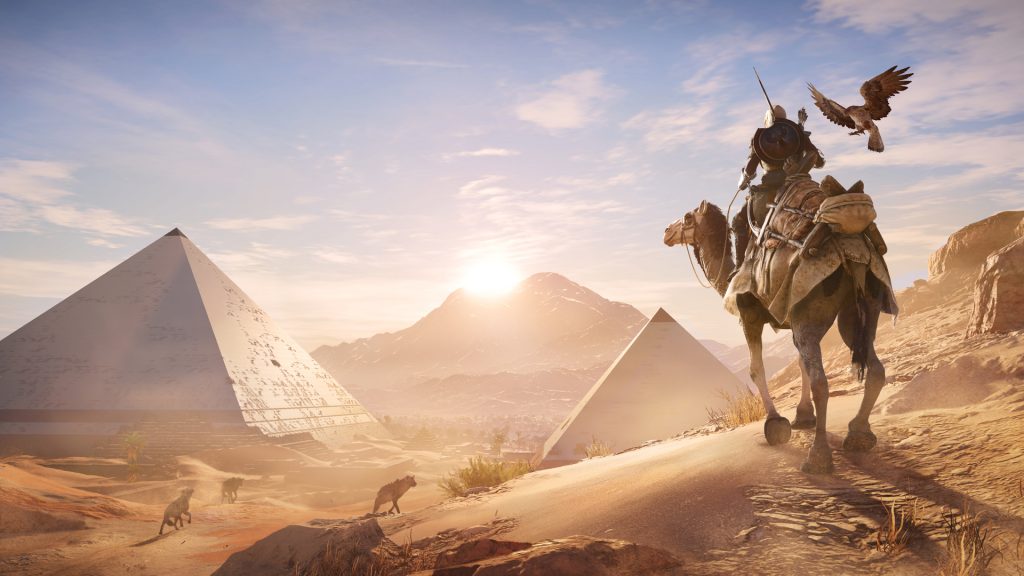 This gives the game a wonderfully layered sense of history. In one level, playing the game let’s you experience the “now” of 49 BCE, witnessing firsthand what life was like under the reign of Ptolemy and amid Greek occupation. In another level, you get to see the real Ancient Egypt—the days of pyramids and sphinxes—through the eyes of a character who’s both connected to and distanced from that history. Visiting Giza for the first time is every bit as awe-inspiring for Bayek as it is for you as the player—probably even more so.

The Assassin’s Creed Origins research team went to great lengths to make the game as authentic as possible, and it shows.

In keeping with that, the Assassin’s Creed Origins research team went to great lengths to make the game as authentic as possible, and it shows. The map spans the full breadth of Egypt, from the Siwa Oasis in the west to the Nile Delta in the east; from the Mediterranean Sea to the White Desert and Great Sand Sea. It’s not to scale, but it nonetheless covers a wide range of Egyptian landscapes, settlements, and historical sites. All of this has been researched closely with Egyptologists, and even if it may not always be perfectly accurate due to gaps in our current knowledge of the period, it’s authentic and believable. 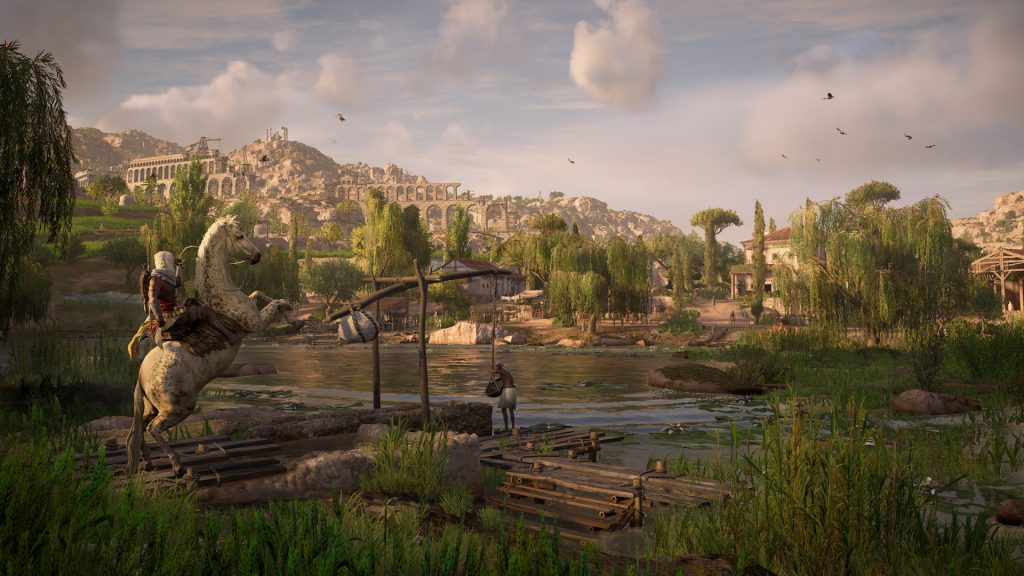 This is most apparent in the way people speak. Egypt today is an Arabic country, but Assassin’s Creed Origins takes place a few hundred years before the Muslim conquest of the country. The ancient Egyptian language evolved through many different forms over the years, with many different influences, including African languages, Arabic, Greek, and Hebrew. Walking through Origins’ cities and listening to the chatter, or talking to other characters as the story unfolds, you can hear all those influences. Ubisoft even managed to create some colourful language by working with linguists and historians. Historical authenticity has always been the Assassin’s Creed series’ strong suit, and this might be the most meticulous to date.

Against this backdrop, the game has you doing all the usual stuff: tracking targets, climbing towers and monuments, sneaking about, hiding in hay bales, and what have you. The basic Assassin’s Creed systems haven’t really changed, but smart, open level design and a wide range of weapons give you a lot of freedom to choose how you approach each objective. The setting means that bows make a welcome return, allowing for quiet, efficient ranged kills that the guns of the last couple of games didn’t allow.

Hand-to-hand combat is a bit more involved this time around. At the most basic level, you’ve got light and heavy attacks at your disposal, as well as evasive maneuvers and a shield to block with. Other abilities come from skill tree upgrades, like parries, charge attacks, and the ability to tame wild animals to fight alongside you. Compared to the combo system of Assassin’s Creed Syndicate, which sometimes felt like a dynamic string of quicktime events, Assassin’s Creed Origins combat is more freeform, with a lot more options at any given moment. 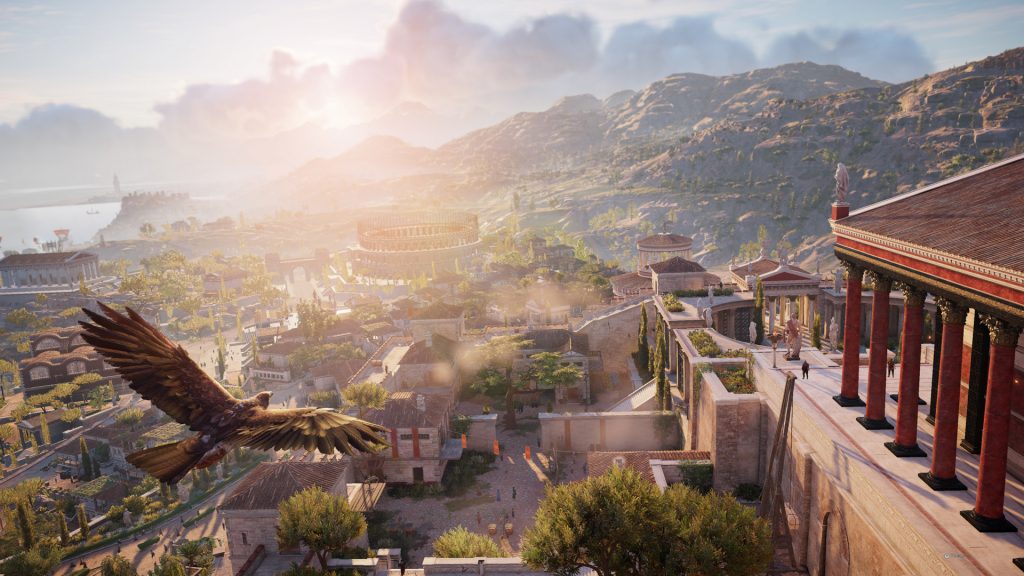 One big change comes in the form of Senu, Bayek’s eagle companion. At almost any time, you can use “Eagle Vision” to switch control to Senu, giving you an overhead view of the map. From this perspective, you can scout the area, mark enemies, narrow down the location of objectives, or simply take in the sights. Making good use of Senu’s abilities is vital for an effective stealth approach, adding a slower, more methodical, more strategic element to the game. It’s certainly a nice change from the more clumsy stealth systems of the last couple of games.

Assassin’s Creed Origins also sports a much more RPG-like design, though I’m not so convinced about this. I love RPGs, but the new levelling and loot systems don’t seem to really bring anything to the table other than extra busywork and micromanagement. Gear drops are plentiful, but typically involve the same handful of basic weapon types with minor stat changes—resulting in a lot of time spent in the menu dismantling junk. Levelling up comes with an increase in stats, though not a dramatic one, and a couple of points to spend in a skill tree. Practically, this isn’t much different to the equipment systems and skill trees of earlier Assassin’s Creed games; it just seems to add complexity for complexity’s sake.

Like most open-world games, Assassin’s Creed Origins falls into the trap of overloading you with laundry lists of things to do. That said, it’s a bit more restrained than a lot of its peers, and most of the optional quests at least serve to lead you to places and sights that you might otherwise miss. Thanks to the immaculate world-building, the game is also the series’ best in simple terms of giving you a place to just exist in and to explore.

That being the case, I’m very much looking forward to the launch of Discovery Mode early next year. The game is a lot of fun, but its strength definitely lies in the world that invites you to and the history it explores. As it stands, Assassin’s Creed Origins is still the best game in the series to date, but when I can just freely explore its vision of Egypt and learn about the history along the way, it’ll be one of the best games of this generation.

If you enjoyed this review and plan to buy Assassin’s Creed Origins, you can help Shindig by using this affiliate link.

Assassin’s Creed Origins is developed and published by Ubisoft. It’s available now for PlayStation 4 (reviewed), Xbox One, and PC.