It’s hard to not feel cheerful playing All-Star Fruit Racing. A well-made kart racer is always a lot of fun, and Fruit Racing‘s sickeningly sweet fruity theme and eccentric characters take that to another level. Think Sugar Rush from the Wreck-It Ralph film, but with fruit instead of candy, and you’ll have some idea of what to expect.

The basic idea of All-Star Fruit Racing is much like any other kart game: go-kart racing across outrageous courses full of loops and massive jumps, with arcade physics that make power slides essential and braking little more than a novelty, and an array of cartoonish weapons with which to even the odds.

What makes All-Star Fruit Racing stand out, first and foremost, is its abundance of brightly-coloured fruit. Each character in the game is based on a certain type of fruit, in both their visual design and their unique special weapon. Every track is adorned with colourful produce, and the tracks themselves are grouped into islands representing different fruiting seasons. The weapon system is designed around a juicer, which you fill up by collecting different fruits scattered about the roads, and even the loading screens come with some useful fruit-related trivia—did you know that there are over 7,000 different kinds of apple? 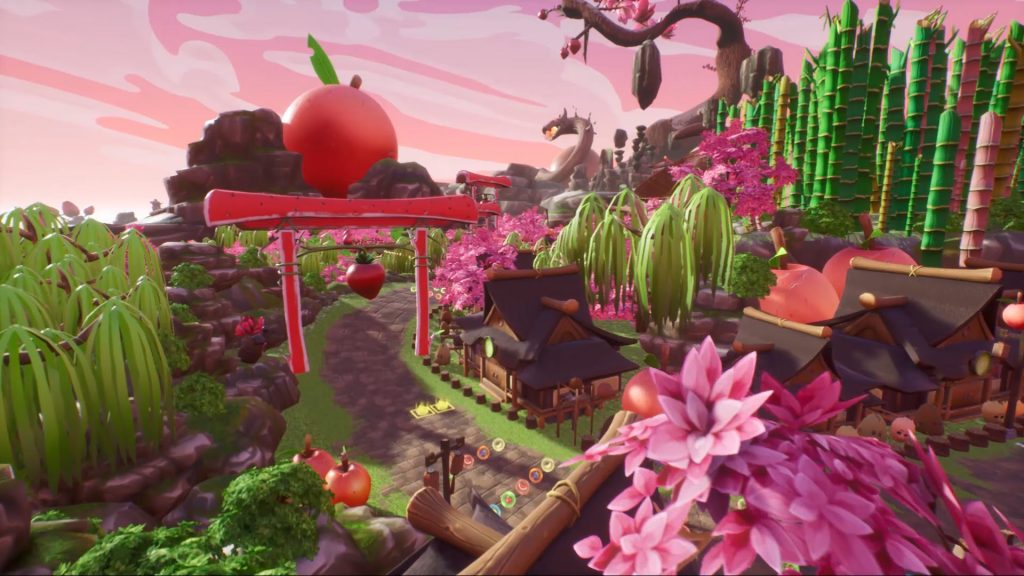 Oddly enough, the actual karts themselves are decidedly un-fruity—they’re regular big-wheeled go-karts with some colourful splashes of paint, and maybe a coconut or watermelon for an aerial. But in everything else, All-Star Fruit Racing lives up to its name as much as it possible can.

This might seem superficial, and to a certain extent it is, but this unique presentation is the source of so much of the joy that All-Star Fruit Racing delivers. Almost by design, kart racing games straddle both fun and frustration, but the cheerful tone takes the edge of the most annoying moments—even if an unlucky weapon takes from first place to last, you can’t be too mad when you’re racing around a stack of giant strawberries that are so bright red that they border on luminescent.

The kart racing game underneath all those colours is rock solid, too. Getting the hang of the feel for the karts and the physics of power-sliding around corners takes moments, but you can spend hours figuring out how to get the most out of that system to shave precious milliseconds off your lap time. That becomes crucial on the more challenging cups, and especially in time trials, where even beating bronze records demands tip-top racing. Then there’s the “Juicer” weapons system, which brings an unusual degree of control and strategy to what tends to be very randomised. As you race around, you pick up fruit of various colours; these in turn full four colour-coded tanks of your juicer. When one or more tanks are full, you get to activate a weapon, depending on which combination of tanks you’ve got ready to go.

For example, a full green tank gives you a speed boost, and a full red one gives you a slowdown puddle to drop behind you. But if you fill both those tanks, you get a speed boost that also slows down anyone caught in your wake. As a general rule, more tanks means a more powerful weapon—and each character has a unique special move at four full tanks—but the trade-off is that it takes longer to fill. Crucially, you’re not forced to to use whatever tanks are ready to go; you can detach and reattach any tank at any time, preserving that particular juice and opting for a weaker (but perhaps more situationally useful) weapon instead. With that setup, there’s a lot of room for strategizing, and making use of the right weapons at the right time can often be the difference between first and last place.

(If that sounds like too much to think about, don’t worry. There are also game modes that use a more traditional random system, and the single player campaign includes about a 50/50 mix of both weapon styles.) 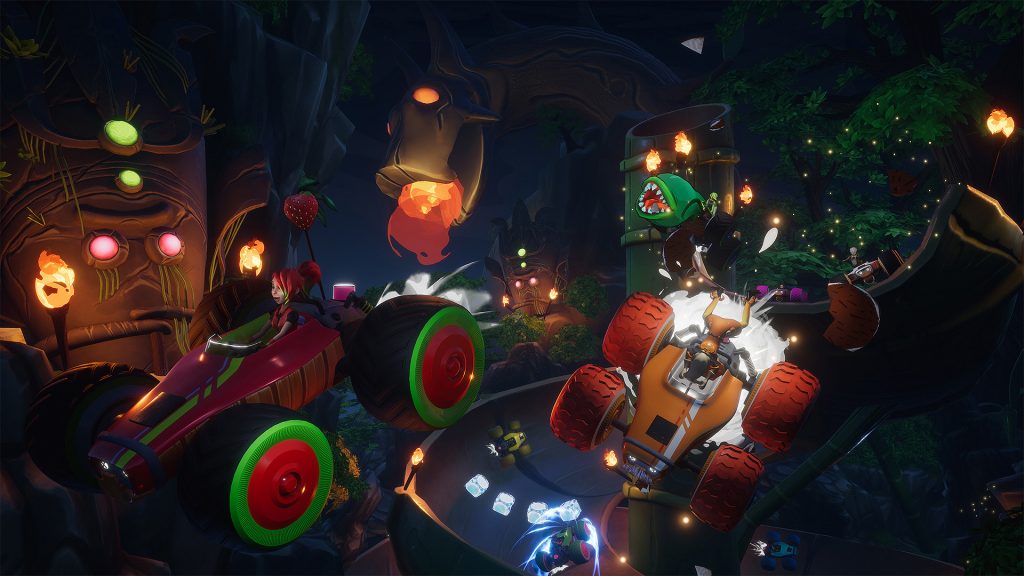 The courses are fantastic, too; even after many hours with the game, I don’t think there’s a single one I’ve grown weary of driving. Each one is full of the sort of hairpin bends that only a kart racer can really get away with, as well as plenty of massive jumps, humorous obstacles, shortcuts, and a few gravity-defying tubes. It’s not unusual for a course to split at some point, typically giving you some risk and reward to weigh up: do you take the longer, easier path, or the shorter but narrower one that asks you to zip through a series of rolling barrels?

As I said before, fruit is the main source of decor on each track, but that’s also set against some more varied (though familiar) backdrops. You’ll find most of the usual kart course tropes among All-Star Fruit Racing‘s number: there’s the dockside pirate village, full of narrow streets and sharp turns; Japanese gardens with plenty of water hazards to look out for; an overgrown jungle that’s home to a hidden temple; and the obligatory Rainbow Road clone, to mention just a few.

All of that makes for a kart racing game that’s a whole lot of fun, especially when you’re playing with other people. That said, robotic AI can makes the single-player modes can be frustrating, especially on harder settings. Computer-controller players are eerily good at avoiding your weapons and hitting you with their own, making it very hard to inch your way forward and very easy to fall back to last place. If an AI player manages to pull away from the pack, catching up with them is next to impossible; on the other hand, even the most perfect driving won’t get you a similar lead against the computer. I’ve still yet to place in the final campaign mode cup because of how brutally, unfairly difficult it gets. 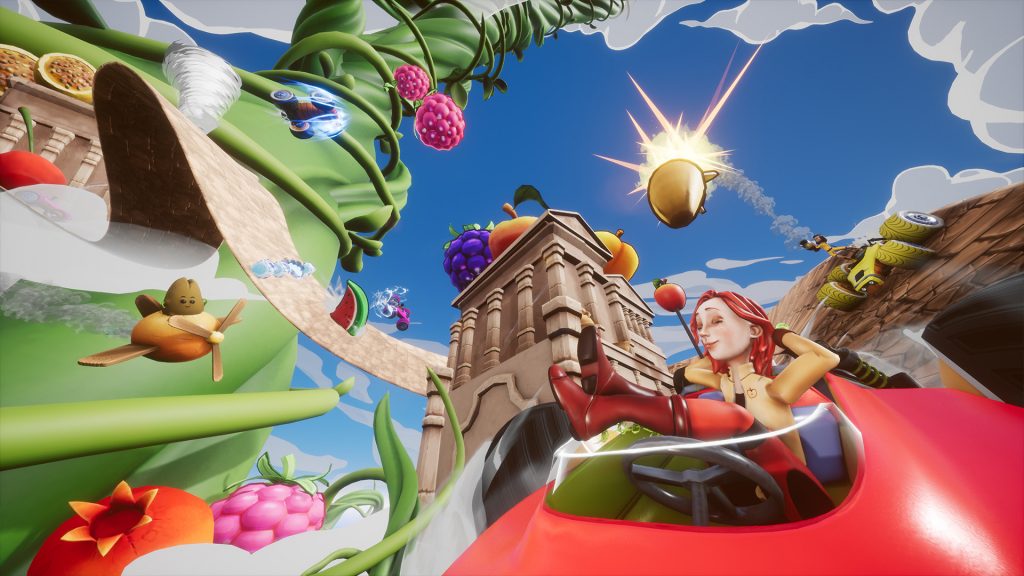 The time trials are also obscenely hard. It’s just you against the clock, with no other racers to contend with and no weapons, but that also means a smaller set of tools for building up speed. Even beating bronze records seems to require flawless driving, with every turn taken as efficiently as possible and the power-slide system pushed to its limits—to say nothing of silver or gold.

All-Star Fruit Racing is a game made by a small team on (presumably) a relatively low budget, and that shows in things like overall polish and performance. Loading generally takes a very long time, and some of the finer details of the game’s physics lack refinement—collisions aren’t as punchy as they could be, karts kind of just land from big jumps without the sort of bounce you’d expect; that sort of thing.

Those flaws are minor blemishes in the scheme of things, though. All-Star Fruit Racing is a more than competent kart racing game, with a unique look and creative weapon system that makes it stand out from the crowd. It’s approachable enough for the whole family to enjoy, but also deep and complex enough to hold the attention of the hardcore kart racing aficionados. More than anything, it’s just so overwhelmingly happy and bright and colourful that it’s hard not to be a fountain of fruity joy when you’re playing. Isn’t that what you want from a game like this?

All-Star Fruit Racing is developed by 3DClouds.it and published by PQube. It comes out 13 July for Switch (reviewed), PlayStation 4, Xbox One, and PC.