Reading the press release that came into my inbox this morning, my first thought was how exciting this whole prospect was. Then I got to the part about an optional Harvesting Stick accessory, which “turns a player’s smartphone into a miner’s hammer, botanist’s axe or fisher’s rod, allowing them to swing their phone in the real world like they would in-game to harvest resources.” I checked the date, and sure enough, it was 1 April, and the trailer confirmed that this was an April Fool’s Day gag.

I honestly thought this was a real thing at first, so the realisation that it wasn’t was disappointing. Aside from the Harvesting Stick part, FFXIV GO actually sounds like a brilliant idea. Much of Pokemon GO‘s appeal was obviously nostalgia and Pokemon branding, but it’s also a genuinely clever game in its design. Combining that with Final Fantasy XIV is a no-brainer, and the game’s material gathering systems would translate perfectly from Eorzea to this sort of GPS-enabled app.

It’d also be a neat way to do something I’ve long thought Final Fantasy XIV ought to do: let players engage with crafting and gathering systems through a mobile app. FFXIV has a neat crafting setup, but for a lot of players, myself included, it often takes a back seat to the combat and adventuring elements—dungeons, primals, levelling and gearing up war and magic jobs, and so on. A mobile game tie-in for crafting or gathering, would open up a part of FFXIV that I don’t think gets as much attention from players as it deserves, and it’d also let us play the game in some capacity when we’re not at our computer or console. 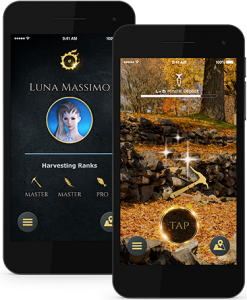 Even if it’s not the GPS-based approach seen in this April Fool’s joke, a companion app that lets players engage with FFXIV in a more meaningful way would be a wonderful thing. It could be a simplified version of the main game’s crafting interface, letting players use materials from their retainer inventories to craft items. It could be some sort of idle game, where players use minions to gather materials as they intermittently manage timers or other resources. Even just a way of managing retainers, ventures, and market board listings would be most welcome.

So even though this Final Fantasy XIV Gathering Outdoors thing is a mildly funny April Fool’s prank, I hope it’s also a sign that the people at Square Enix are thinking about some sort of FFXIV mobile game. A few other MMOs have done similar things, and being able engage with my characters while I’m out and about would be a great thing indeed.