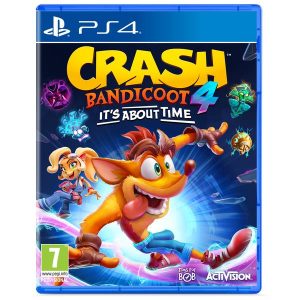 More than a decade since we last saw a new Crash Bandicoot game, there’s a new one on the way. Crash Bandicoot 4: It’s About Time, out October 2 for PlayStation 4 and Xbox One, is a direct sequel to (and a return to the spirit of) the original trilogy.

Crash Bandicoot 4 picks up after the end of Crash Bandicoot 3: Warped, with Dr Neo Cortex, N. Tropy, and Uka Uka escaping their imprisonment on a distant planet—and tearing a hole in the fabric of space-time in the process. It blends classic Crash Bandicoot platforming with new abilities like wall-running, rail grinding, and rope swinging, with multiple playable characters including Crash, Coco, and Cortex.

Toys for Bob is behind the new game, following their success with the 2018 Spyro the Dragon series remake, Spyro Reignited Trilogy.

“Crash Bandicoot 4: It’s About Time stands on the shoulders of the core precision gameplay we all fell in love with in the ‘90s,” said Paul Yan, Co-Studio Head at Toys for Bob. “This epic new adventure spans space and time, introducing new ways to platform that both long-time fans and new players alike will enjoy mastering. Get ready to fall in love with the mutant marsupials all over again!”

The original Crash Bandicoot games, developed by Naughty Dog, are some of the most fondly-remembered games of the PlayStation era. A change of developer and publisher in the early 2000s met with a less enthusiastic response, and a controversial redesign of the iconic main character after Activision picked up the license in 2008 certainly didn’t help.

The success of 2017’s Crash Bandicoot N. Sane Trilogy and 2019’s Crash Team Racing Nitro-Fueled made clear that what fans really wanted was a return to what made the original games so beloved in the first place. A brand new game that follows in those same footsteps should be a surefire recipe for success—we’ll find out later this year if Crash Bandicoot 4: It’s About Time is able to stick the landing.

Crash Bandicoot 4: It’s About Time is up for pre-order now at a number of retailers. Pre-ordering from nzgameshop.com using the below affiliate links helps to support Shindig through a commission: