Gal Gun: Double Peace opens with the painfully average high school boy Houdai being shot with a cupid’s arrow. However, the distracted angel messes up, and so instead of some regular-strength arrow, Houdai’s struck by a supercharged one. The end result? He’s now irresistible to every girl in the school, but he has to confess to his true love by sundown or he’s cursed to be forever alone.

Making that confession isn’t easy. Never mind how hard it is to profess your love for someone anyway, but Houdai has the additional hurdle of being constantly swarmed by girls yelling admiration and trying to grab him, give him love letters, kiss him, and in some cases, even torture him. Luckily, the angel gave him a way to defend himself: a magical gun that shoots “pheromone shots”. A few of these, or a well placed “ecstasy shot”, is enough to make any girl collapse in a fit of euphoria, giving Houdai a chance to get away. 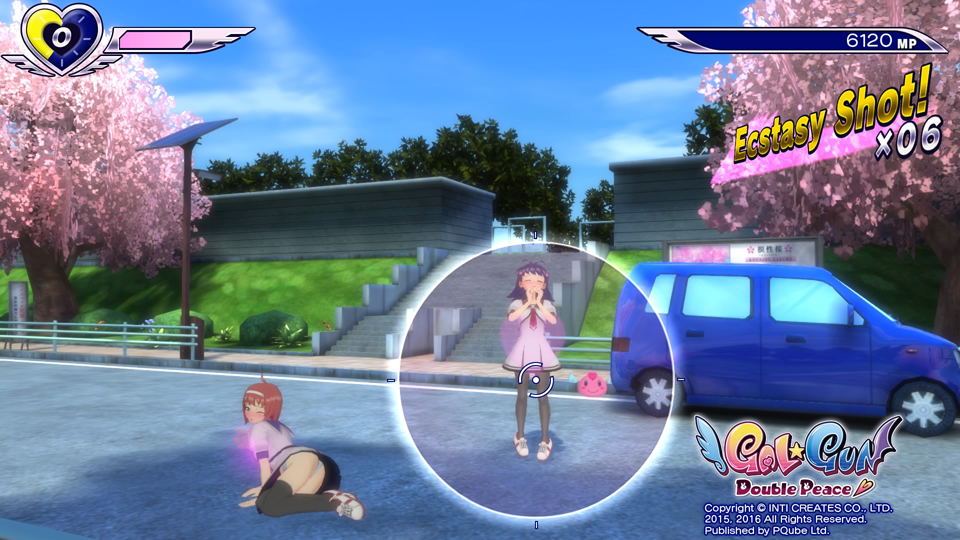 Which brings us to the first of many factors that makes Gal Gun: Double Peace such a brilliant game. It’s a rail shooter, like Time Crisis, House of Dead and the like, but instead of bad guys and zombies, your enemies are cute anime girls. Instead of killing your assailants, you’re effectively giving them orgasms so good that they’re left unable to move. This alone puts Gal Gun: Double Peace in an interesting (and often hilarious) position, but it’s also really refreshing to play a shooter that doesn’t have violence as a thematic core. This isn’t the first game to spin shooter mechanics in such a way, of course—Pokemon Snap did this way back in 1999, and I’m sure even that had its precursors—but they’re still enough of a rarity to be a noteworthy subversion of shooter norms.

Gal Gun: Double Peace is particularly potent in this regard, because it highlights the disparity between social attitudes to violence and sex in games. It’s lewd, but far from explicit, being comically suggestive more than anything else. Violence of the same tone and degree as Gal Gun’s sex regularly gets away with a Teen rating, but on its sexual content alone, Gal Gun picked up a swathe of stricter rulings across the globe: R18 in Australia, ESRB M (17+) in America, PEGI 16 in Europe, and CERO D (17+) in Japan. Video games don’t exactly have a great track record when it comes to sex, but they’re not really any better in their handling of violence, and yet ratings boards still consider tone and context in a way that they just don’t do for sexual content. With its sexual spin on traditionally violent mechanics, Gal Gun puts a spotlight on this inconsistency. 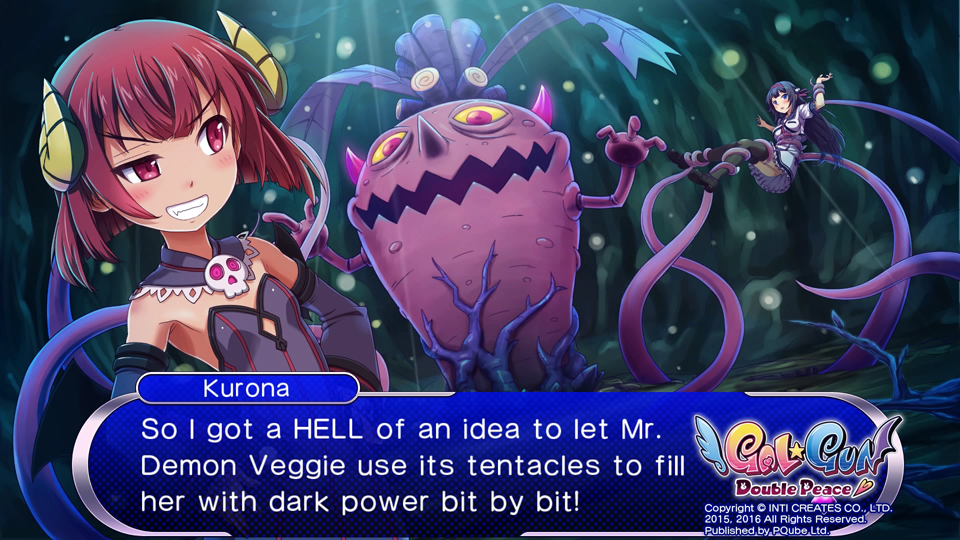 It also turns attention to its own ilk, parodying “pervy anime games” in a way that’s hilarious and quite pointed. The role reversal that casts sexy girls as enemies puts a humorous twist on otherwise perverted actions, like hiding out in the girls’ locker room. With “Event Scenes” that put you in bizarrely suggestive situations—trying to free a girl from a sticky demon trap she’d set up, or outright fighting a tentacle monster—Gal Gun constantly plays up the lewd concept of the game, but it’s so humorously self-aware that it’s hard treat it as anything other than a bawdy satire of erotic games. If that’s not enough, Gal Gun takes every opportunity to chastise the “perverts” whom you can only assume make up the bulk of the game’s target audience.

Moreover, for a game with such sexualised aesthetic, Gal Gun: Double Peace does a surprisingly good job of giving depth and personality to its cast. The visual novel aspect of the game is centred on a small group of people who get some really captivating development even within the relatively short span of a single run through Story Mode. Shinobu is a girl struggling to balance being a good big sister with a strong feeling of inadequacy towards her sibling; Maya is a talented demon hunter carrying the weight of her family’s expectations. Even Ekoro and Kurona, and angel and demon who mostly serve as comic relief, have a plotline in which they find that maybe they have more in common with one another than they thought—like an anime-styled Good Omens. 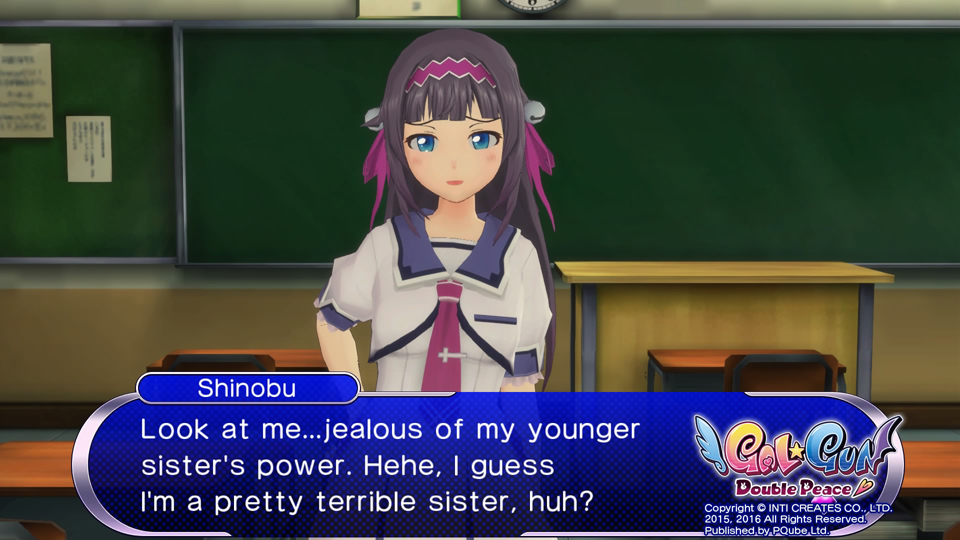 Beyond the core cast, there are some 70 different girls in Gal Gun: Double Peace, each with their own personality quirks and unique voice actor. They mostly function as enemies to be pheromone shot, but to excel at the game, you have to actually get to know them. Being able to recognise an individual girl in an instant and take aim where she’s most sensitive—which, of course, means actually knowing where she’s most sensitive. Optional quests have you trying to track down people based purely on character traits; if you need to find someone who works at a coffee shop, you need to not only know who that is, but be able to pick her out from a crowd.

If there’s anything to criticise Gal Gun: Double Peace on, it’s that the localisation job isn’t fantastic. The English script is generally very good, but it’s very literal, to the point that you really need a decent working knowledge of Japanese culture going in. For most of the audience, this won’t be an issue, but it does solidify the game’s place as a niche title. Some non-essential Japanese is left untranslated, too, which is far from a dealbreaker but means that those without a basic understanding of the language will miss a few things, like the humour in lovestruck teenage girls yelling “DAISUKIIIIIIIIIIIIIIIIIIIIIIIIIIIIIIIIII!”. 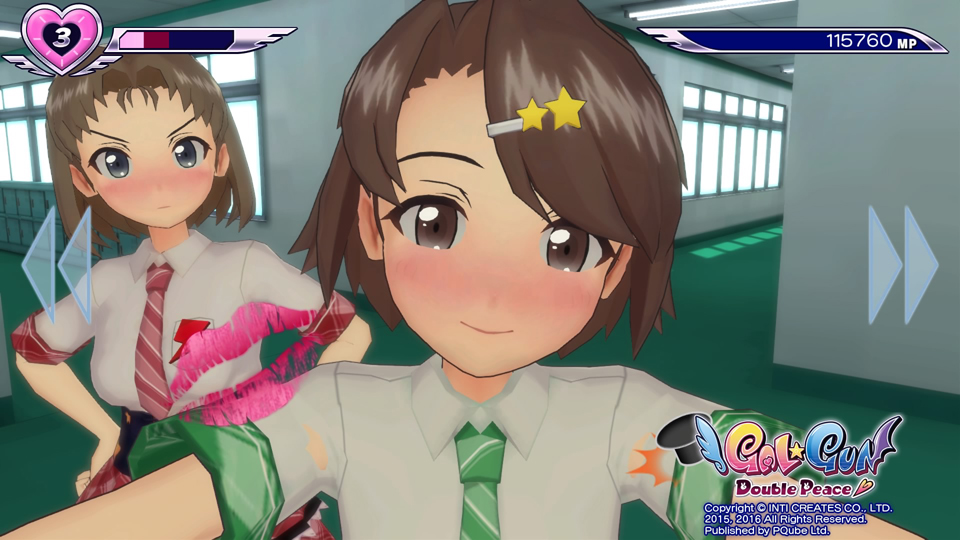 The fact that Gal Gun got localised at all, though, is a welcome surprise. It’s a game that seems almost doomed to failure, given the general Western reaction to “pervy anime games”. I’m sure that most people will treat this as yet another such game, and that’s a real shame, because as racy as it is, it’s the way that it satirises and subverts its contemporaries that makes Gal Gun: Double Peace such a great game. By writing it off like that, people are missing out on a sharp, hilarious satire of those very games—and just a really good rail shooter in general.

A press copy was supplied by PQube for this review.