Spoiler warning: This whole article is about a major spoiler for Dragon Quest III. As if the title didn’t give that away.

Fake endings aren’t exactly a rarity in video games, or any narrative for medium. This is particularly true of RPGs, where “surprise! here’s the real final boss” is such a worn-out trope that not having a mysterious new enemy suddenly appear is more of a plot twist than actually having one. (What? You mean this villain we’ve been fighting all along is actually the villain? Working of their own volition, not being a puppet for something worse? Incredible!)

Every now and then, something will come along and really make the fake ending trope work, though. Castlevania: Symphony of the Night is perhaps the most significant and memorable example in gaming, but almost 10 years before that game came out, another did something similarly impressive. Dragon Quest III put the fake ending to such good use that, even playing the game for the first time in 2015, and even knowing that it’s coming, it blew me away.

Baramos, the “final” boss in Dragon Quest III, as seen in the mobile version.

It’s with this context that you play through Dragon Quest III. Progressing through the game is largely the same as the first two games: travel the world, completing a series of tasks that ultimately open the path to the Dark Lord – this time, a guy called Baramos. Once you’ve slain the villain, you return to the castle where you started, while the king thanks you and the people celebrate your success in freeing the realm for the clutches of darkness – just like the ending of the first two games.

Then, during this ceremony, a massive earthquake shakes up the world, and a mysterious voice announces that he, Zoma, is the true lord of Darkness, and that Baramos was just pawn. That earthquake, meanwhile, opened a hole in the ground, and by jumping in, the hero and her party head to the World of Darkness to face Zoma. The World of Darkness, also known as Alefgard, which is – literally – far below the “overworld”. 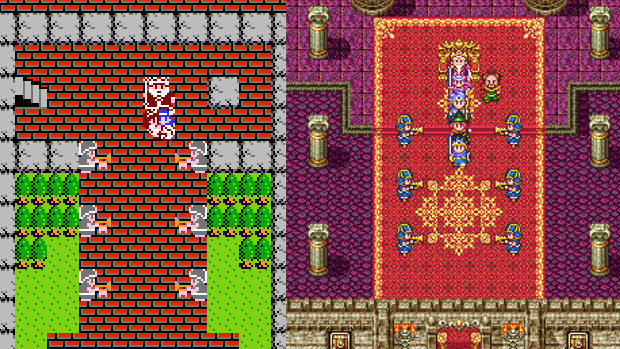 This last leg of the journey is then a brilliant throwback to Dragon Quest, as you go through what is essentially a Cliff’s Notes version of that adventure, visiting many of the same towns (albeit earlier versions of them) and collecting the same or similar items, in order to go to the same final dungeon (with a different layout inside, though) to beat Zoma once and for all. And once you finally do that? You earn the title of Erdrick – the hero of whom Dragon Quest’s protagonist is a descendant.

Nothing about this is particularly unique, on its own (though it may have been when Dragon Quest III first came out in 1988). But it’s the way it all comes together that just makes it work so well – the mirroring of earlier games in the fake ending, and the complete lack of connection to those games until the real end sell it so well. Like I said, I knew this was coming, and it still blew me away. In 2015. When fake endings are a dime a dozen.

I can only imagine how powerful this would have been in 1988 (or 1991, when the game came out in America as Dragon Warrior III). Dragon Quest III is a game that was so ahead of its time in so many ways, but the fake ending definitely takes the prize.