There’s something special about going back and experiencing old games with fresh eyes. I’m not talking about revisiting childhood staples, though that is great too, but playing games for the first time that are 10, 20, even 30 years old. Some games buckle under the weight of their age, others hardly show their years at all. But always, always, there’s a history lesson to be found within, a fascinating insight into how gaming has gotten to where it is today.

Enter Dragon Quest. Originally released in 1986 for the Famicom in Japan, the game opened the door to one of Enix’s (now Square Enix) most popular series’, and in a lot of ways, laid the foundations for the Japanese role-playing game (JRPG) genre as we know it. Everything from powerhouses like Final Fantasy to the quirky, niche offerings of Nippon Ichi Software owe some tribute to Dragon Quest. 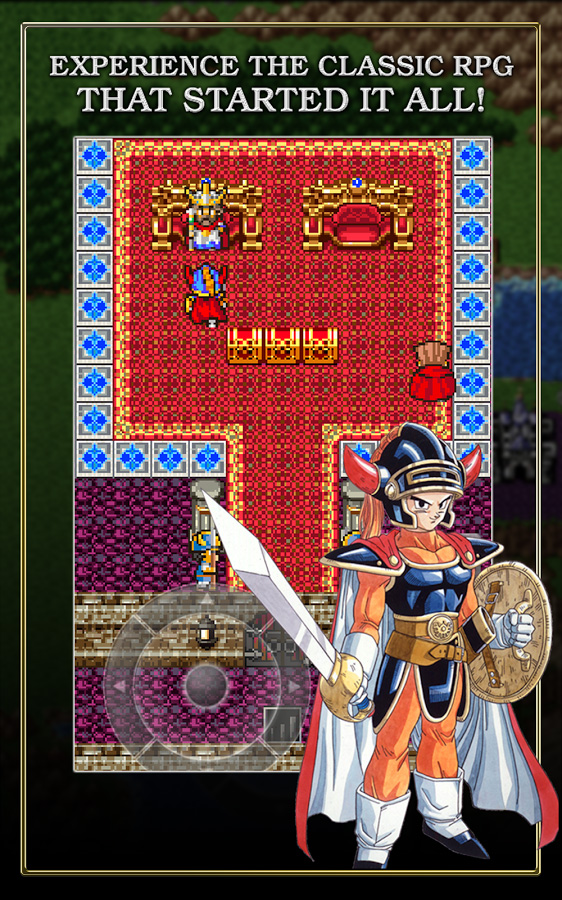 Which makes playing it today a strange, surreal experience. Even the Android version – which is based on the Super Famicom remake, and has a number of improvements to make the game more accessible – feels dated for reasons that a simple graphical overhaul can’t help. The story is barebones, progression is based around excessive grinding, and the game is very vague about what you actually need to do at any given point. But going in with the knowledge that this is essentially a 30 year old game makes it easier to overlook, and even enjoy, these flaws, and the history they trace for the genre. In other ways, Dragon Quest is a game that was impressively ahead of its time.

The game casts you as the descendant of the hero Erdrick, who is prophesied to be the one to end the threat of villainous Dragonlord who has been terrorising the world. Along the way, you’ll rescue Princess Gwaelin, who falls madly in love with you, and… that’s pretty much it. Admittedly, this is more plot than a lot of what games of the time had to offer, but it’s simple and barebones.

And yet, one can see the seeds of many, many JRPGs to follow, here. The “prophesied hero saves the world” trope is one that would be used time and again in the years following Dragon Quest’s release, with each retelling growing more and more complex and intricate. Even something like Final Fantasy VI – rightly regarded by many as one of the finest examples of JRPG storytelling, and with very little in common with Dragon Quest at a surface level – has the same basic, underlying structure.

But again, this outmoded design has a kind of nostalgic charm to it. There’s something fundamentally rewarding about that gameplay cycle of fight monsters, get stronger, fight stronger monsters, ad. To this day, that’s the most basic component of RPG design; developers have just learned to balance it better and found new, interesting ways to frame it. Playing the mobile version helps, too, because you can play in short bursts without really getting overwhelmed by tedium, and should you overestimate your capabilities, there are no game overs any more. Dying sends you back to the castle where you begin the game, sure, but you no longer lose any progress since your last save. 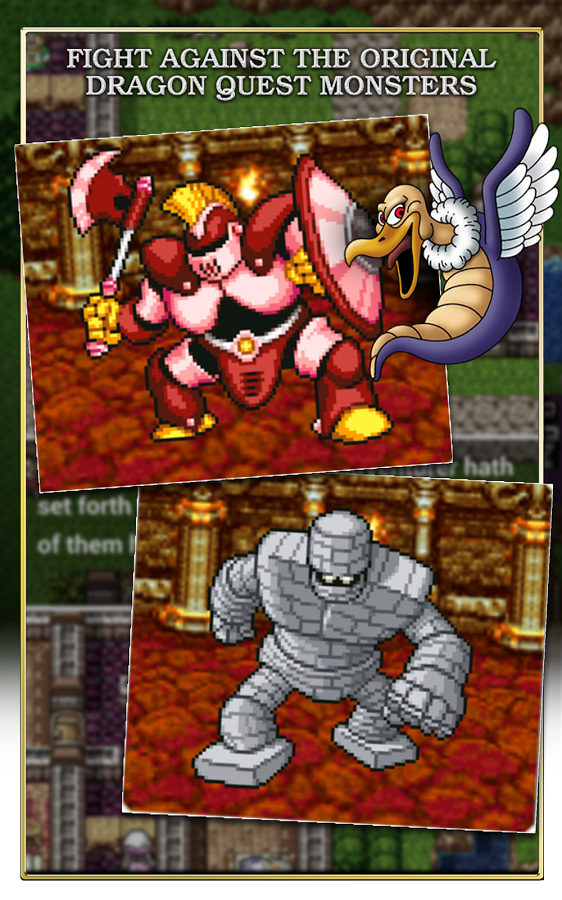 As I said, Dragon Quest was also way ahead of its time. It gives players an non-linear, open world to explore, with the toughness of foes the only means of gate keeping. “Open world” – or, if you prefer, the game industry’s favourite catchphrase in 2015. It let players save and continue their game, a rarity for console games of the time, and took the fairly complicated role-playing genre and simplified it for the masses, creating a whole subgenre in the process.

This is, of course, also the start of a long and successful franchise, which gives Dragon Quest another layer of nostalgia. If you’re a fan of the series, you’ll see plenty of familiar faces here – Slimes, Drackies, and Golems, to name a few. The Dragon Quest series is one with distinctive, recurring visual themes, monsters, and art styles, all of which can be seen in the first game. It’s interesting to see where this all began, but even more so, how little some things have changed over the course of 30 years, 10 main-series games, and countless spinoffs.

If Dragon Quest came out today, it would be rightfully panned for its simple, trope-laden plot and repetitive, grind-based progression. But, in the context of its time, it’s a rather groundbreaking game, and that shows through even today. Like so many of its peers, Dragon Quest holds up not necessarily as a timeless classic, but as an important and fascinating history lesson.