Dragon Ball Fusions takes Dragon Ball back to its roots, in terms of both a rich history of RPGs and the early manga’s quirky satire.

Most Dragon Ball games are fighting games, especially in the last 20 years or so. That makes sense, what with it being a martial arts manga and all, but it’s easy to forget that there’s a rich tradition of Dragon Ball RPGs as well. I have fond childhood memories of playing a fan-translated version of Dragon Ball Z: Super Saiya Densetsu, which was itself a remake of two Famicom games released many years prior.

It’s also easy to forget that Dragon Ball started out as something of a satire of martial arts manga that were starting to grow popular in the early ‘80s. Before all the melodrama and episodes-long battles, it was a silly, satirical comedy series more interested in lampooning shōnen manga tropes than anything else.

Dragon Ball Fusions is something of a return to form on both those fronts. It’s a JRPG first and foremost, compete with a turn-based battle system, stat management, levelling up, and lots of textbox-driven dialogue. It’s also a decidedly, deliberately ridiculous game, spanning the full breadth of Dragon Ball history, but with that self-aware humour from the early work. 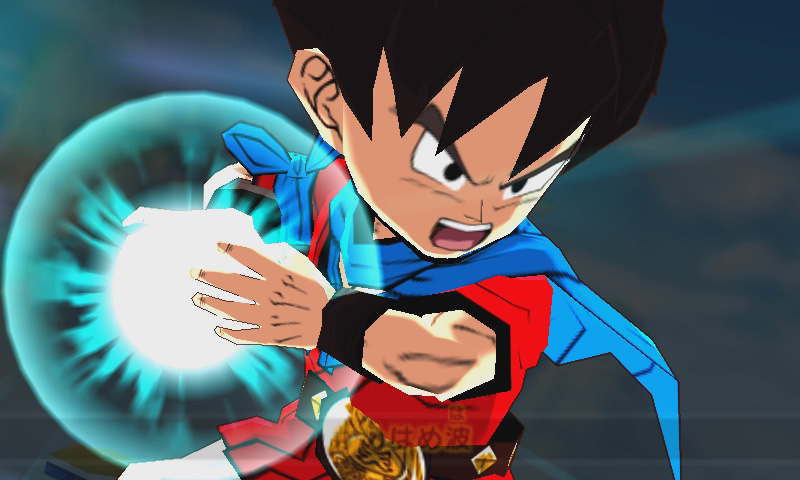 Back to the Future

Dragon Ball Fusions begins with the player-created hero, Tekka, and their friend / rival Pinich finding the seventh and final Dragon Ball, entitling them to one wish from the all-powerful dragon Shenron. Wishes rarely go as planned, however, so when the pair wishes to find out who is the strongest fighter ever, Shenron takes the most literal approach possible: he creates an alternate dimension to host the Timespace Tournament, inviting fighters from the expanse of Dragon Ball’s timeline.

It’s a bizarre plot that, on a functional level, exists to create a narrative context for the character-collecting mechanic at the heart of Dragon Ball Fusions (more on that in a bit). But the game is fully aware of how silly this is, and runs with it. Much of the humour is drawn from absurd situations where characters who should never exist in the same timeline age brought together.

You have kid versions of characters like Goku fighting alongside their adult selves. You have a teen Trunks meeting his mother, Bulma, long before she’d ever met Vegeta and had a kid. A lot of these jokes will fall flat for people who aren’t big Dragon Ball fans – anything relating to happenings beyond the Frieza saga went over my head, for instance – but I don’t see anyone who isn’t at least a little bit familiar with the series picking this up. 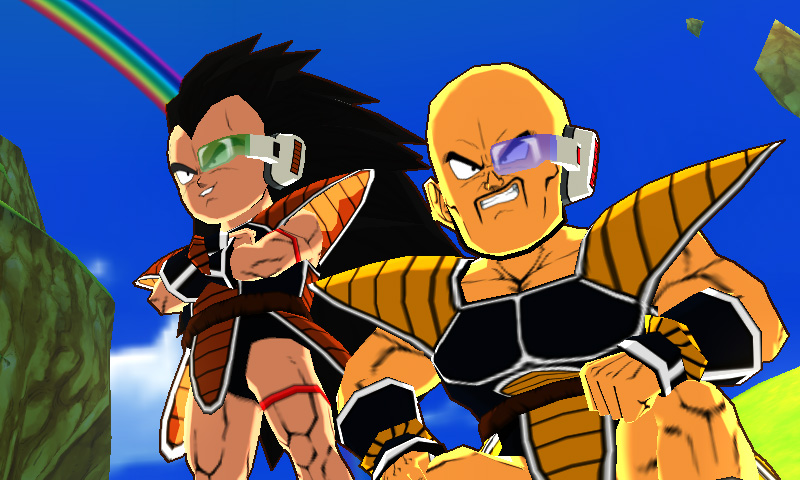 This silliness also extends to a parody of Dragon Ball itself, in much the same way as the early manga poked fun at shōnen trends. There’s many a joke about the need to constantly power up, and characters – villains especially – come across as caricatures of their manga and anime counterparts.

Unfortunately, Dragon Ball Fusions falls into the same trap that Dragon Ball Z did: it loses its edge with time, and morphs into exactly what it initially set out to parody. Jokes wear thin when you’ve heard them enough times, and as the story progresses, it tries (and fails) to take on a more earnest tone that undermines that self-awareness. What starts out as side-splittingly funny calls victim to diminishing returns before too long.

I’ve played enough JRPGs that it’s rare for a battle system to genuinely surprise me, but Dragon Ball Fusions did just that. It’s one of the most creative systems I’ve encountered, combining traditional menu-based attack selection, the positioning of a tactical RPG, Budokai-inspired button-mashing action, and physics combat reminiscent of pool. It’s a very odd mix of inspirations, but somehow it all clicks into place. Allow me to explain. 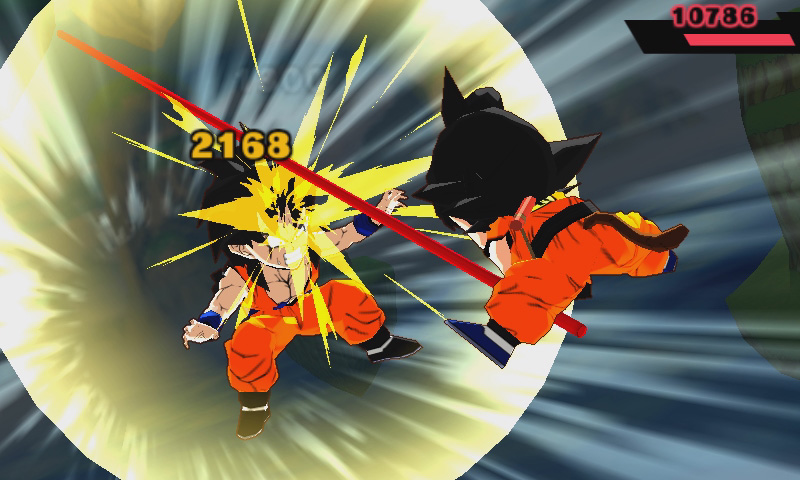 Battles take place on a circular or rectangular battlefield, with characters taking turns based on an ATB system. When it’s one of your characters’ turns, you get to choose from a melee attack, ranged ki blast, or one of a handful of special attacks. When you pick a melee attack, you also get to pick which direction to attack from, based on an octagon around the target; assuming the attack lands, they’ll go careening in (roughly) the direction opposite where you attacked from. If you can make them hit another enemy, they’ll crash and both take some extra damage, and if they hit someone from your party, that character will attack and knock the victim back in a different direction. Hit an enemy hard enough, and they’ll go flying across the battlefield, knocking other enemies and sending them flying – like balls on a pool table – all while racking up extra damage.

This, naturally, also means that positioning is critical. You don’t want to set yourself up for a big chain of damage, but you want to also try line up enemies for maximum hurt. Melee attacks put your character right next to their target, while ki attacks let you choose where your character moves to and then attacks from (this also affects the trajectory of the attack, and subsequent enemy movement). A lot of attacks have an area of effect – usually a circle around the target, or a straight line in front of the attacker – further emphasising positioning. Herd your enemies right, and you can line up the whole group to get lit up by a Kamehameha blast. 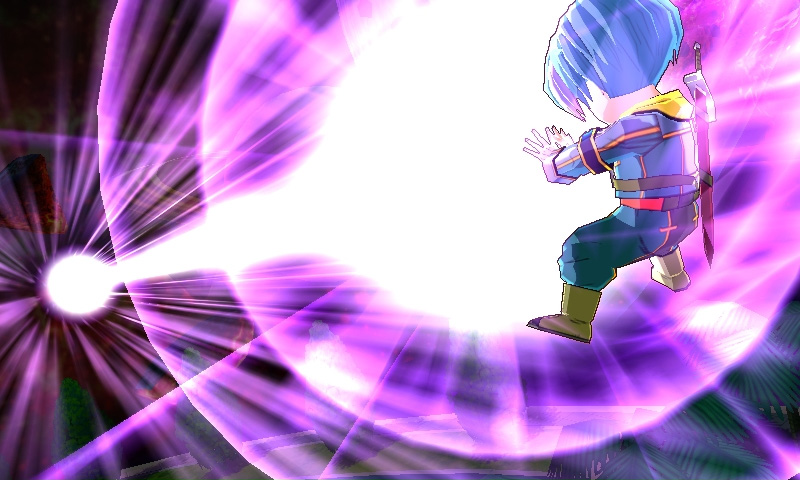 If that’s not enough to think about, there’s also a special gauge that, when at least half full, lets you use a powerful Zenkai Attack or Ultra Fusion, and this is where the brawler mashing comes in. A Zenkai Attack targets one enemy and is mechanically similar to a melee attack, except that before the attack actually lands, you go into a brief one-on-one action battle where you can attack and dodge to your heart’s content. The more hits you can land here, the more damage the finishing blow will do. Ultra Fusion, conversely, fuses your whole party for one powerful attack with an large area of effect, and again, that brawl gives you a chance to dial up the damage.

To put it far more simply, there’s a lot happening in Dragon Ball Fusions’ battles, with a lot of different systems at work. But all these things blend together, almost effortlessly, to create something unique and enchanting. This game is much more combat-focused than your typical JRPG, without much in the way of exploration and puzzle solving, but the battle system is deep enough and interesting enough to carry that burden.

Somewhat less interesting is the Pokemon-like character collecting. There are over a thousand characters to recruit, but most of these are newcomers made just for Dragon Ball Fusions. They don’t have any sort of narrative role, and even in combat, they don’t offer anything that the  characters don’t already offer. They seem like they’re just there to give you something to collect. Recruiting them is necessary, though, because doing so increases coloured energy that’s used to gate progression. There are five colours relating to five races (Earthling, Saiyan, Namekian, Offworlder, and Alien); recruiting a character increases your maximum stock of the associated colour of energy, while defeating enemies increases your stock of their energy colour, up to whatever your current max is. This energy can then be spent on things like outfits for your hero, new skills, and – most importantly – breaking through barriers to progress through the game. Thus the need to tediously collect these minor, inconsequential characters.

On the other hand, almost every character who’s appeared anywhere in Dragon Ball can be recruited, and they’re far more interesting. Many join you as a matter of course in the story, and others are found and recruited through sidequests. Unlike those minor characters, these ones have a presence within the game’s story, as well as the cross-media familiarity. They’re also generally stronger in combat than those minor characters, and there are enough of them that the collection element would still work well enough.

This all amounts to a game that’s delightful at first glance, but gets progressively less interesting as the jokes wear thin and the more tedious elements ramp up. The battle system alone makes Dragon Ball Fusions worth checking out, though, and its heart is certainly in the right place. It’s nice to see that Bandai Namco hasn’t entirely forgotten about Dragon Ball’s RPG and comedy history, and I hope that we see more stuff like this amid the inevitable Xenoverse sequels.

A press copy was supplied by Bandai Namco Entertainment for this review.