I must admit: aside from DuckTales, I can’t remember ever playing any of the games in The Disney Afternoon Collection. I didn’t have a NES as a kid, and when I discovered the joys of retro gaming as a teen, I was much more interested in games like Final Fantasy and Castlevania. For me, this new collection of decades-old Capcom Disney games isn’t a chance to revisit my childhood, but to discover those classic games that my childhood was missing.

Well, mission accomplished. Even playing them for the first time in 2017, the games in The Disney Afternoon Collection are a joy to play. They’ve got the frivolity of Disney’s ‘90s cartoons, the 8-bit charm, and Capcom’s well-established expertise in designing action games. They’re challenging, but not as brutal and unfair as the games responsible for the term “NES hard”. They’ve aged surprisingly well, and new features like a rewind button and the ability to save anywhere remove the frustration of more dated design aspects like life counters and harsh checkpoints.

It’s easy to see why these games are such classics. I’m 27 years old, but playing The Disney Afternoon Collection, I felt like I was a kid again. These games aren’t part of my childhood, but the characters and stories certainly were, and the collection took me back to those Saturday mornings spent with Darkwing Duck and Chip ‘n Dale. If the games could have that kind of impact on me as an adult in 2017, what would they have been to kid me in the ‘90s? 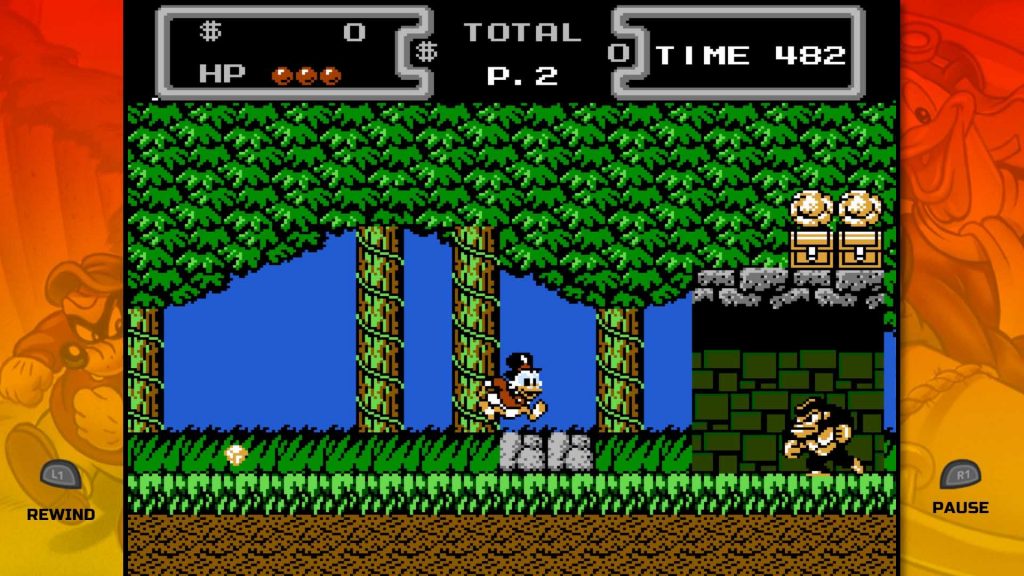 Nostalgia aside, these are just solid, well-made games. Given their age and hardware limitations, they’re relatively simple in design – they’re all 2D platformers, aside from TaleSpin, which is a shoot ‘em up. They control smoothly, especially by NES standards, and that’s something that game designers struggle to get right to this day. No doubt Capcom’s experience with the likes of Mega Man and Bionic Commando helped a lot.

Each game also has its own quirks. DuckTales and DuckTales 2 take an exploration-driven approach, with a focus on searching for treasure rather than just getting to the end of the level. You can’t attack enemies directly, but you can jump on them with Scrooge McDuck’s trademark pogo stick, and reach me heights in the process. They’re no Metroid, but they’re underpinned by a similar interest in discovery.

Rescue Rangers and Rescue Rangers 2 are more straightforward, linear platformers, but their gimmick is that Chip and Dale don’t have any built-in means of attack. Instead, you pick up boxes strewn about each level, which can either be thrown or crouched under; if an enemy touches the box while you’re hiding, it dies, but you lose your cover. Boxes are plentiful, but also finite and you can only carry one at a time, so you need to pay attention to the level itself and think ahead about how you’re going to use your tools. 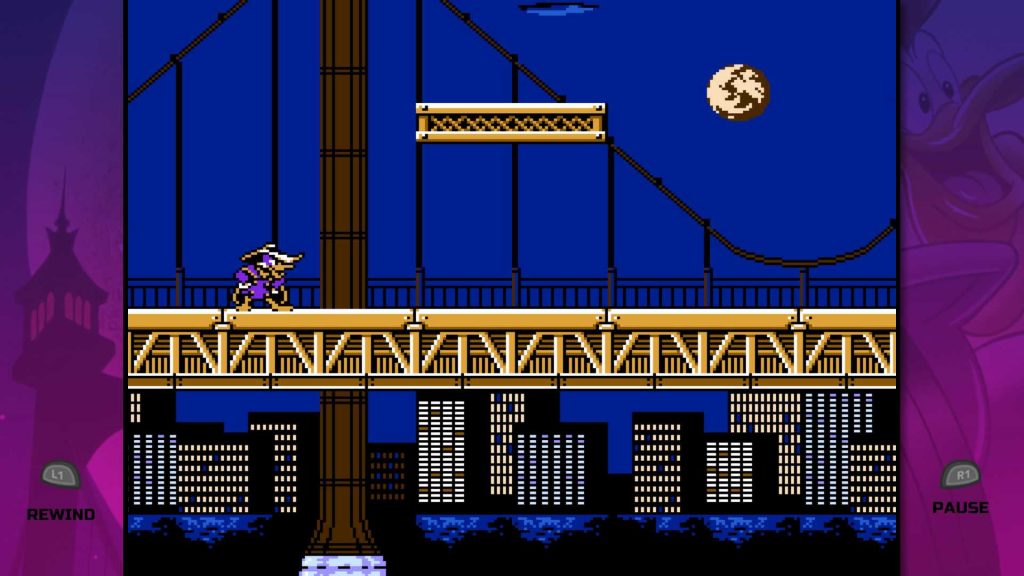 Darkwing Duck is perhaps the most straightforward of the platformers: run, jump, shoot. I don’t say this to criticize – if anything, this is my favorite game in the collection. It sticks closely to a Mega Man – like structure and design, and that’s not a bad thing but any means. It just doesn’t feel quite as innovative as the other games in The Disney Afternoon Collection.

Finally, there’s TaleSpin. This is a scrolling shoot ‘em up, but without that genre’s patented focus on enemy onslaughts. There are foes to get in your way and shoot down, but just as much of the challenge comes from platformer-esque environmental obstacles, like mazes to fly through and falling hazards to dodge. TaleSpin may seem like an outlier, but it’s got a lot more in common with its The Disney Afternoon Collection peers than you’d expect.

All these games are playable in their original format, and are identical to their NES counterparts; that they still play so well today is testament to how well-designed they were in the first place. They do sport some less desirable relics of the 8-bit era, like an unforgiving life system and password-based saving, but luckily, Capcom saw fit to put in some bandaids for those in The Disney Afternoon Collection. Most useful is the rewind feature: at any point, in any game, you can hold down L1 to rewind and try again. Make a bad jump? Rewind. Get hit by an enemy? Rewind. It arguably makes the games too easy, but it removes a lot of the tedium that comes with archaic life and checkpoint systems. You can still play without using rewind, if that’s your jam, and there are trophies to encourage challenge-oriented players to do so. You can also save anywhere, in a similar fashion to save states in emulation software. 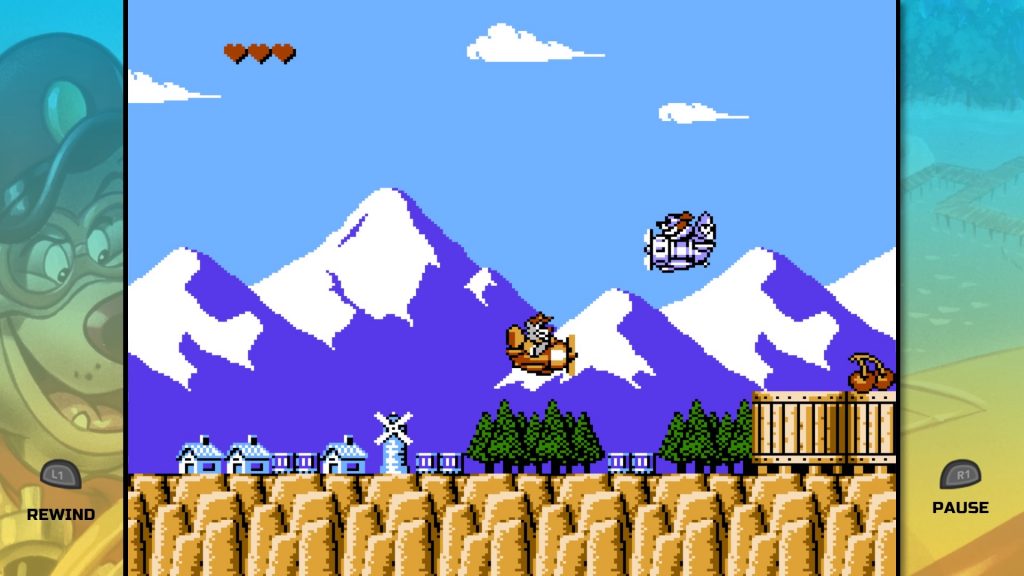 The Disney Afternoon Collection also adds Boss Rush and Speed Run modes for each game, complete with leaderboards. In an age of streaming and speedrunning events like Games Done Quick, this is a very welcome feature, and I’m sure there’ll be a few hardcore players vying for the top spots on the leaderboards for each game. Even if you’re not looking to be the best in the world, these modes are a fun way to experience the games in a different way; Boss Rush in particular is a great way to take five minutes out of your day.

I think it’s a given that the primary audience for The Disney Afternoon Collection is the people who grew up playing these games, and they’re definitely the people who’ll get the most out of this package. Still, even if nostalgia isn’t a factor for you, this is an excellent collection and a great way to experience some of the finest games of NES era.

The Disney Afternoon Collection is developed by Digital Eclipse and published by Capcom. It’s available now for PlayStation 4, Xbox One, and PC.