Although it’s almost certainly a coincidence, the timing of the release of Collar X Malice couldn’t be more apt. Particularly in America, but across the globe, there’s a growing distrust of law enforcement by the very people the law is meant to protect. We’re seeing fascist movements gaining prominence, civil unrest in response to that, vigilantism, and gun lobby dogma about armed citizens being the ideal way to keep peace.

It’s against that backdrop that Aksys released the localisation of Collar X Malice, and I’m proud of them for it. Not just because it’s a good game – though it certainly is – but because it’s an insightful and provocative look at vigilante justice and gun control at a time when that’s something we desperately need. That may seem an odd premise for a dating sim, but it’s precisely their ability to explore decidedly non-romantic concepts through romance games that makes Otomate such a powerful force in this medium. 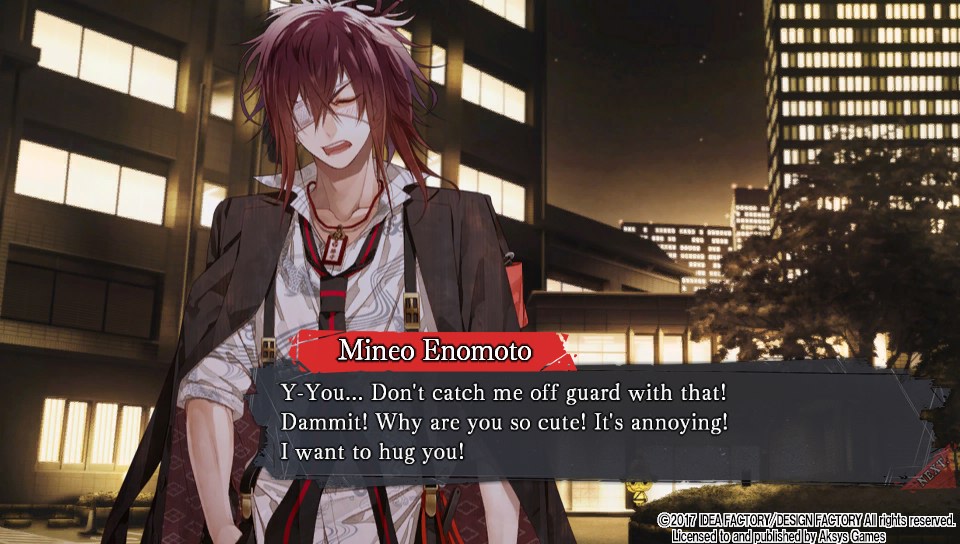 Collar X Malice takes place in a near future, with Japan at the mercy of a mysterious criminal organisation called Adonis. Dissatisfied with the country’s apparent apathy in the face of “evil”, the group’s taken it upon itself to judge all those it deems to be sinners. Using monthly publicly-broadcast murders to prove its commitment and make an example, Adonis counts down to what it calls “X-Day” – the day that every guilty person in Japan will be judged.

As police officer Ichika Hoshino you find yourself roped into investigating the X-Day incidents. While investigating another crime, you’re suddenly attacked and knocked out, only to wake up in a strange chapel with a metal collar around your neck. Through a voice transmitter in the collar, your assailant informs sets you a challenge: solve the X-Day incidents before the deadline, or die to a poison that’s injected through the collar. Fortunately, you’re not alone. A chance (or is it?) gets you acquainted with a group of former cops who are also investigating the attacks, and with their aid you might just be able to free yourself and take down Adonis.

This isn’t a typical investigation, though. Adonis’ attacks are all centered on Shinjuku, and due to the intensity of the attacks and the terror threat, the Japanese government decided to quarantine the district. Furthermore, the government took the unprecedented move of repealing the Swords and Firearms Control Law within the closed-off area, and issued handguns to all citizens living in Shinjuku – for the sake of their own protection. The thinking is that, if people have guns, they’ll be able to defend themselves and others in the event of another Adonis attack. 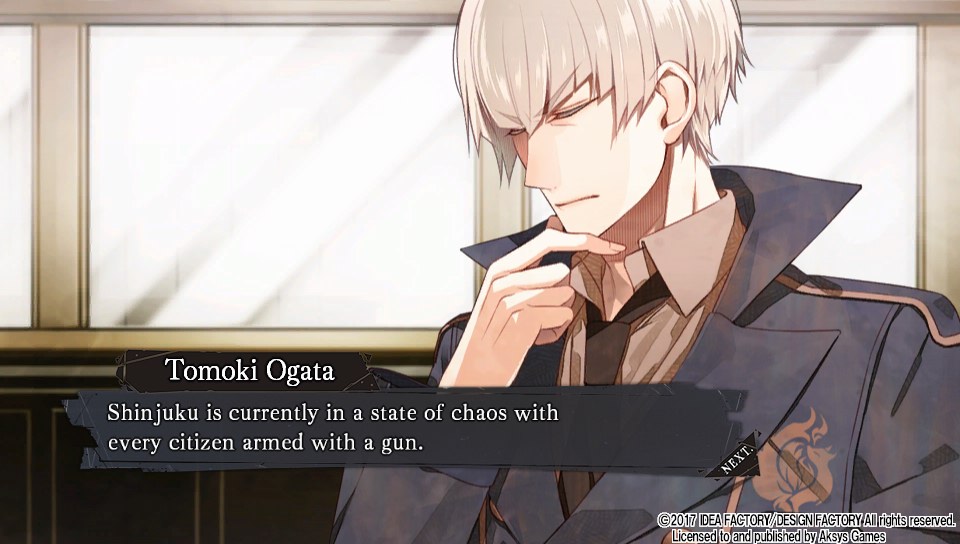 You have to understand what an extreme step that is. Collar X Malice is a game developed and set in Japan, which has some of the oldest and strictest gun control laws in the world. Less than 1 percent of the population even owns a gun, and there’s a strict regime of background checks, training, and regular reassessment. Even among the yakuza and other criminal groups, firearms are a rarity. Japan also has one of the lowest rates of gun-related death in the world, and that’s no coincidence – fewer guns and better regulation means fewer gun deaths.

The notion of suspending the Firearm and Sword Possession Control Law – even just in one small, quarantined district – is an outrageous one, but that’s the vision that Collar X Malice explores. Shinjuku’s become a sort of petri dish for anarchy: masses of terrified civilians, untrained in the use of firearms, given guns and told to defend themselves. And it’s in this context that your investigation into the X-Day incidents play out.

With this fragile social situation, the goalposts for the case keep moving – I don’t want to give too much away, but it’s safe to say that Shinjuku’s surge in violent crime plays nicely into Adonis’ plans. It means that the evil masterminds aren’t the only threat; regular citizens on edge or playing at being heroes can be just as dangerous. In fact, Collar X Malice has a lot of bad endings, spread across the breadth of its routes, that come down to mindless gun violence. It can be frustrating to suddenly find yourself getting the visual novel equivalent of a game over because you made the “wrong” choice, but there’s a potent statement in that. 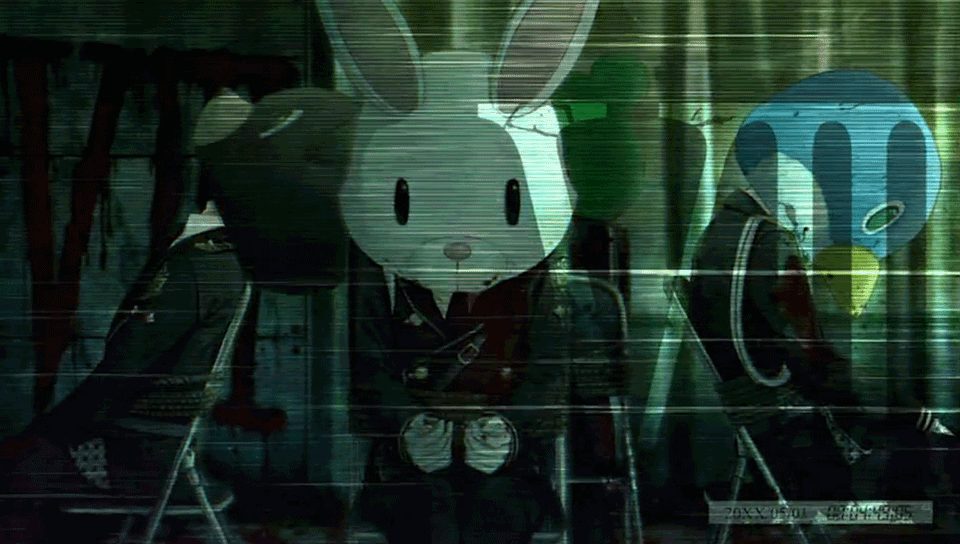 Over the course of the investigation, you naturally find yourself getting better acquainted with your new colleagues. Each of them has a personal connection to the X-Day incidents and their victims, and this is where Collar X Malice takes the chance to dive deeper into the issues at play. One route looks at the fallibility of police, and even people who go in with the best intentions can find themselves abusing their powers. Another looks at the psychology behind vigilante justice, and how it can propagate like a virus when people can’t trust the people meant to be protecting them. I particularly insightful route draws comparisons between Japan’s gun control policy and the lack thereof in the United States, through someone who spent a few years abroad and has made restoring the Swords and Firearms Control Law his personal mission.

It’s also through these growing friendships that the dating sim side of Collar X Malice comes through. After everything you’ve read so far, it might be odd to imagine that this game is still an otome game at heart, but it really is. The relationships that develop are by turns cute, romantic, funny, and sexy, and the bachelors are all beautiful, with the sorts of quirky, cool designs that only Otomate’s talented artists can achieve. Given the crime thriller setting, the romance is a bit more muted than your typical otome game – this isn’t some sort of meet-cute romantic comedy – but I think it works really well. The relationships feel organic and believable in a way that few romance games do, making them all the more captivating as a result.

Aksys localisation efforts have a huge role to play in that as well. The team have managed to capture all the personality and character quirks of the Japanese script perfectly, but with a translation that comes across so naturally that it feels like English was the game’s original language. The gold standard of localisation is to have a product that’s exactly what the original creator would have done had they been a native speaker of the target language, and Collar X Malice is one of very few games I’ve played that come close to that. If you enjoy otome games, it’s almost certainly for the sweet amour and adorable suitors – I know that’s why I like them. You always get that when you play an Otomate game, but you often get a lot more, too. Collar X Malice is the best example of that yet, lacing a grounded approach to romance through a powerful, thought-provoking social commentary. Cute boys, kissing, and a perceptive exploration of gun violence? This is one of Otomate’s best.