With its square-jawed focus on the inner workings of Bruce Wayne, Batman: The Telltale Series has, until now, been missing a lot of the sort of relationship drama that’s the highlight of the best Telltale games. I must admit, the previous episode, Children of Arkham, worked so well as a deconstruction of Batman that I didn’t really notice until my wife pointed it out to me, but the supporting cast has so far felt quite flat. With the exception of a few key scenes with Selina Kyle, there’s been almost no chemistry between Bruce and the people he supposedly cares about – something that certainly made that final choice in Children of Arkham a lot easier than it should have been.

That was all prior to the third episode, New World Order, though. This is, hands-down, the best episode of the series yet, and it’s largely because it turns the spotlight – bat symbol and all – on those all-important relationships that are the foundation of any good drama. 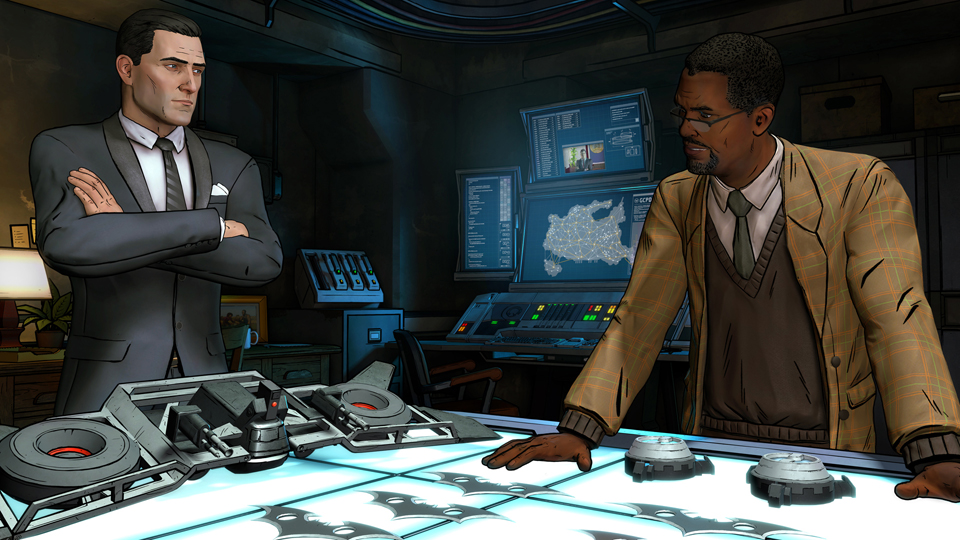 The episode opens with a fairly low-key scene as Bruce visits Dent in hospital, and for the first time in the series, I got the feeling that they were genuine friends rather than just business associates. Obviously, your dialogue choices affect the specifics, but the sense of trust and care between them is apparent regardless of what you say. Both men had been through so much in the previous days, and here they are finding comfort in each other’s company. This is built on in a few other scenes throughout New World Order, but as an opening, it’s a powerful one.

It’s important not just for the sake of making the story more engrossing, but because New World Order puts a lot of focus on Dent’s descent towards becoming Two-Face. He’s a very interesting character who isn’t often done justice, and Batman: The Telltale Series could have easily fallen into that trap of making him a cartoony “split personality” villain. Instead, the effort put into building him up, both as a friend of Bruce Wayne and in his own right, makes his gradual fall from grace complicated and tragic.

Dent obviously plays a significant role, but this relationship-building extends to almost every other person Bruce meets. Even in their brief appearances, Gordon, Alfred, and Renee Montoya show much more personality than they have before, and they show deeper, more meaningful relationships with Batman. New World Order even manages to bring another noteworthy part of the Batman mythos into play with Lucius Fox – played brilliantly by Dave Fennoy – and his rapport with Bruce is apparent from the outset. 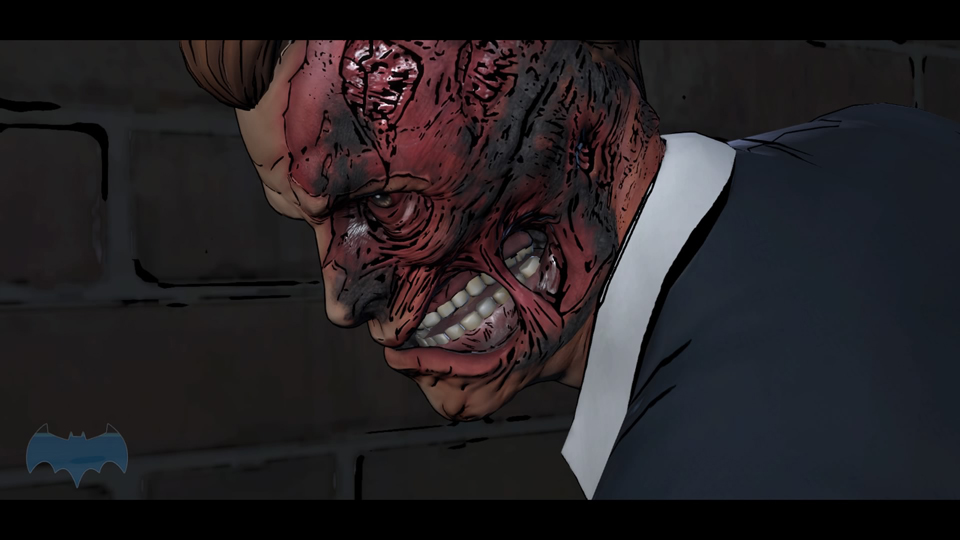 Perhaps the most significant development, though, is between Bruce Wayne and Selina Kyle, aka Catwoman. There’s no way to talk about it without going into some detail about a rather big spoiler, though, so consider yourself warned.

Depending on your choices, there’s a scene towards the end of New World Order in which Bruce and Selina have sex. It’s not really explicit – it’s a foreplay scene, really, rather than a sex scene as such – but it’s ridiculously sexy. In the video game medium that’s something that is, sadly, a bit of a rarity.

It helps that both characters in question are quite physically attractive, and the chemistry between the voice actors, Laura Bailey and Troy Baker, certainly plays a big role. What really makes it so sexy is just how authentic and human it all is. It’s not crass or comical; it’s cute, it’s sensual, and it feels genuine, like Bruce and Selina are both real people, doing what real people do. Obviously, as the person playing Bruce, you can choose to reject Selina’s advances at a number of different points in the proceedings, but for her part, Selina conveys a strong sense of agency as well. 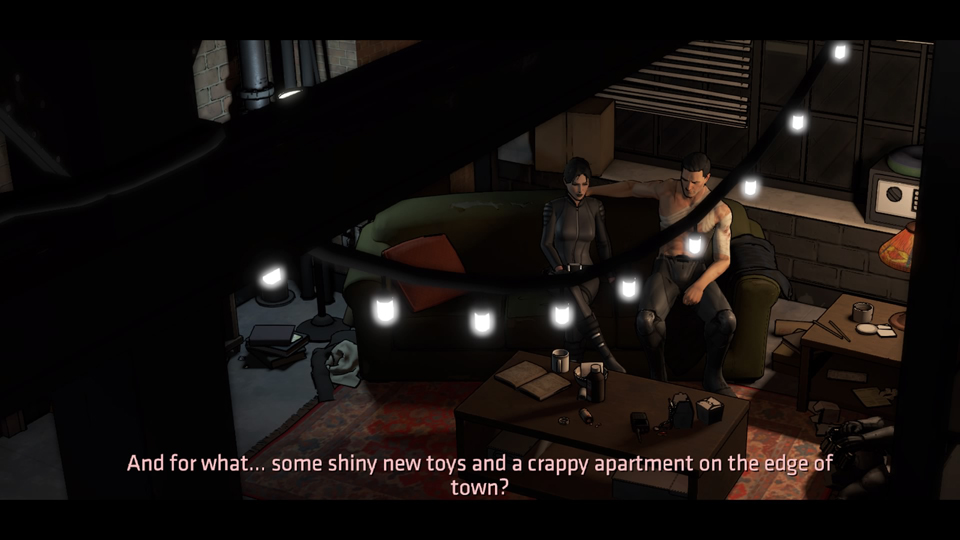 That also makes it an important character-building moment. Bruce and Selina are both such guarded people, but in this moment, they get to be vulnerable with each other. There’s no Batman, no Catwoman; just two people finding love and comfort in their closeness, both physically and emotionally. It’s beautiful.

This all feeds back into the Harvey-Bruce friendship I talked about earlier, because he shows up the next morning and Bruce has to try explain why he’s in Harvey’s girlfriend’s apartment wearing nothing but his trunks. I know that as a player, I’d gotten so swept up in the moment that I hadn’t even thought about Dent and how he’d take it, and I felt really shitty about it when I realised that I had betrayed a friend. It wasn’t just Bruce who’d betrayed Harvey, but me the player, which really made the outcome that much more hard to watch. 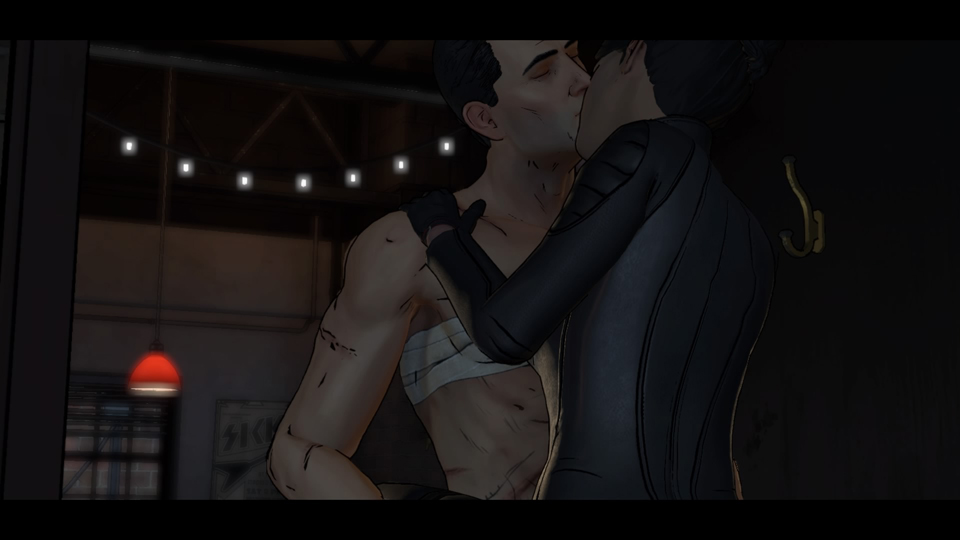 I often see people complaining about technical issues with Telltale’s games. That’s always seemed odd to me, because in the years that I’ve been playing them, I’ve never had any problems other than the occasional, very superficial frame drops. Until now.

In almost every scene, I saw some sort of weird animation glitch: a head looking the wrong way and then jerking into place, a character freezing briefly and then going on fast-forward to catch up to where they should be, that sort of thing. Nothing game-breaking, sure, but in something as cinematic as this, these are major distractions. I can deal the odd slowdown or graphical glitch, but I found them far too frequent in New World Order to just ignore. When everything else about the episode is so good, it’s a shame to have technical issues like causing so much interference. 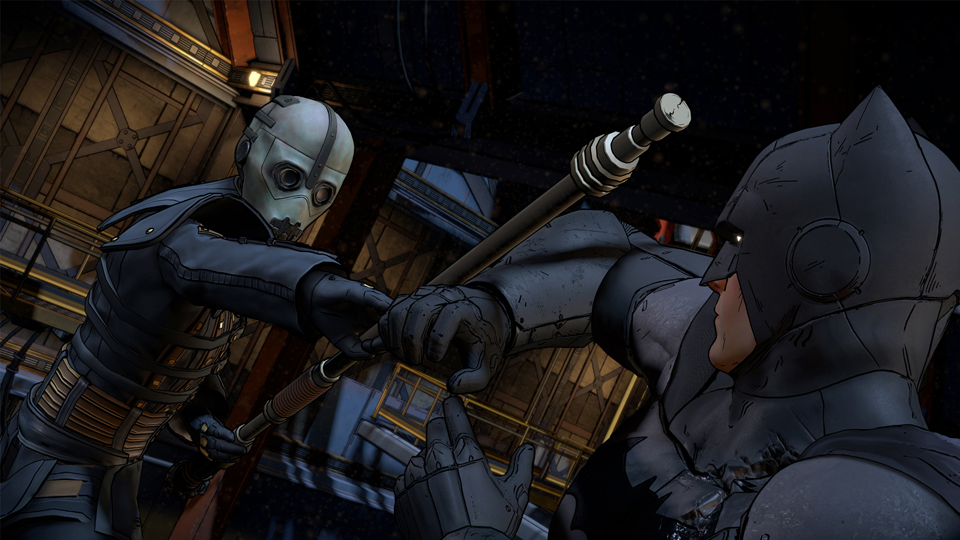 However, even with those annoyances, New World Order is excellent, and definitely the high point of the series so far. All the good things about the earlier episodes are still here – the cool detective sequences, Bruce’s inner conflict, awesome but sparingly-used fight scenes – but it’s managed to pick up some of the slack in terms of character development for the supporting cast. Two-Face and Catwoman are fascinating characters that are often undermined by poor writing, but they’ve been given a chance to truly shine, and the whole Batman universe is all the better for it.

Batman: The Telltale Series is developed and published by Telltale Games. The first three episodes, Realm of Shadows, Children of Arkham and New World Order, are available now for PlayStation 4 (reviewed), PlayStation 3, Xbox One, Xbox 360, PC, Android, and iOS.