These days, it takes a lot for a retro-inspired roguelike platformer to stand out. Bard’s Gold does nothing of the sort. If anything, it’s more simplistic than its peers, but I nonetheless found it to be one of the more enjoyable games to come out of this obsession with pixel art and permadeath.

It follows a nameless bard on his wrist to recover his gold (thus “Bard’s Gold” – geddit?) what is stolen by a cheeky goblin. The journey takes him through four dangerous world plagued with monsters and traps that’ll undoubtedly kill him, but through wits, trial, and error, the player will eventually succeed.

Like many such games, Bard’s Gold puts a focus on learning through failure. The bard dies in one hit and lives are limited, so game over comes quickly in the early stages. However, as you get better acquainted with the enemies, hazards, and semi-random level layouts, the game becomes easier. Despite the mechanical simplicity of straightforward platformer (jump and attack are your only buttons), there’s a steep learning curve early on. As you explore, you collect gems that are used to buy tools and equipment – but when you die, you lose all that equipment. On the other hand, you can spend any leftover gems at the game over screen to buy more permanent upgrades, like increasing the number of lives that you start with our improving the range on the bard’s weapons.

That creates an interesting dynamic where you have to prioritize how you spend your gems. The equipment you can buy within the game is useful, and can often be the difference between life and death. But if you can be thrifty and get by without those tools, you can save your gems for much more useful, long-term improvements.

At least, that’s true early on, while you’re still learning the ropes. As steep of a learning curve as Bard’s Gold has early on, it completely plateaus around the halfway point. There are four worlds in the game, but all the different ways you can die are introduced by the end of the second. The game’s difficulty is in its surprises, but it runs out of these long before the credits roll, making the latter half of the game a cakewalk. Case in point: it took me dozens of times to beat the first world, maybe 10 to pass the second, but I cleared the third and fourth worlds on my first attempt. 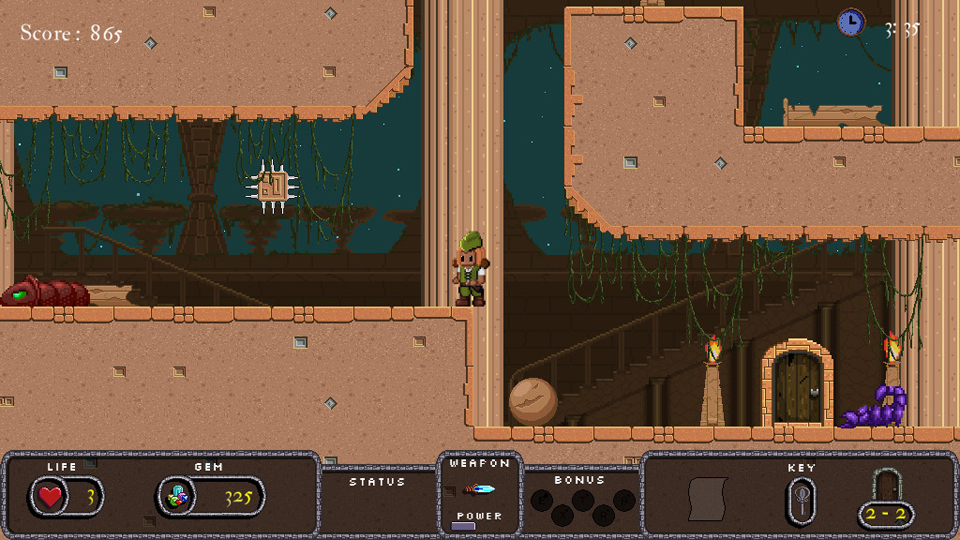 Adding to this is the strange situation where the first boss in the game is the hardest. The bosses at the end of each world are built on very straightforward pattern recognition: two or three attacks that are very easy to dodge, and then just wail on the boss in between. The first boss has annoying minions as well, though, which can interfere with dodging and lead to doom – making it a much harder fight than any of the others, which don’t have that extra quirk.

Oddly enough, I found the “Retro” difficulty – which is harder than “Normal”, in theory – to actually make the game easier. It increases the amount of gems you earn, as well as how much health enemies have. On paper, that should make it a harder game with higher rewards. In practice, the extra gems make a huge difference, while the stronger enemies have almost no impact. The danger of monsters in Bard’s Gold comes purely from their attack patterns. You’ll probably die a few times learning how to fight something new, but there aren’t any endurance fights where a bigger health bar might matter. Once you know how to avoid a monster’s attacks, it makes no difference whether it takes one hit or five to kill them. The tradeoff to that is an abundance of gems, making it very easy to keep yourself stocked with the best equipment, and to buy extra lives as necessary. Should you get game over despite this, you’ll no doubt have plenty of leftover gems to make good progress on permanent upgrades. Retro difficulty is less grindy, more fun, and easier.

The Roguelike difficulty ostensibly adds more of a challenge, by swapping out checkpoints and a stock of lives for a health bar. I must admit, I haven’t played much of this mode, but it seems to have the same problems as Retro mode – it doesn’t affect the actual source of the game’s difficulty, and once you know how to deal with the things the game throws at you, a life bar doesn’t make much difference. In fact, it just means that instead of dying, losing a life, and restarting the level, you can just carry on from wherever you got hit. It’s not often I criticise a game for being too easy. I’m lazy, I don’t care for challenge, and I usually just want to breeze through a game without obstruction – I love easy. In the case of Bard’s Gold, though, its easiness runs counter to the core of the game’s design, and something is lost in the process. It’s still a fun, simple platformer, and a great achievement for a game made by a single person, but it’s not going to stand out from the crowd of 2D platformer roguelikes.

Bard’s Gold is developed by Erdern Sen and published by eastasiasoft. It’s available now for PC, PS4, and Xbox One.

A PS4 press copy was supplied by eastasiasoft for this review.