Atelier Firis gives the Atelier series a new focus on a connected world and a transitory story, perfect for a delightful coming-of-age story like this.

I haven’t played an Atelier game since a brief stint with Atelier Iris on PlayStation 2. It’s not that I don’t like the series; I enjoyed what I played if Iris, and it’s a series that I’ve been meaning to check out the series in earnest for many years. Somehow, the myriad of PS3 and Vita games all passed me by due to lack of time, money, or both.

In a way, that makes Atelier Firis: The Alchemist and the Mysterious Journey my first real exposure to the series. It’s also a really great point to jump in, despite being the second game in the current sub-series, following last year’s Atelier Sophie. It’s certainly a very different game to Iris, but what I’ve heard from others is that it’s quite a departure even from more recent games, especifically in how it approaches the map.

Previous Atelier games were dungeon crawler-esque in their design. You had a home base, where you’d take on quests, buy equipment, and create items through alchemy, and so on. Then you’d set out into the world, choosing your next destination from a map, before proceeding to explore small, discrete locations. 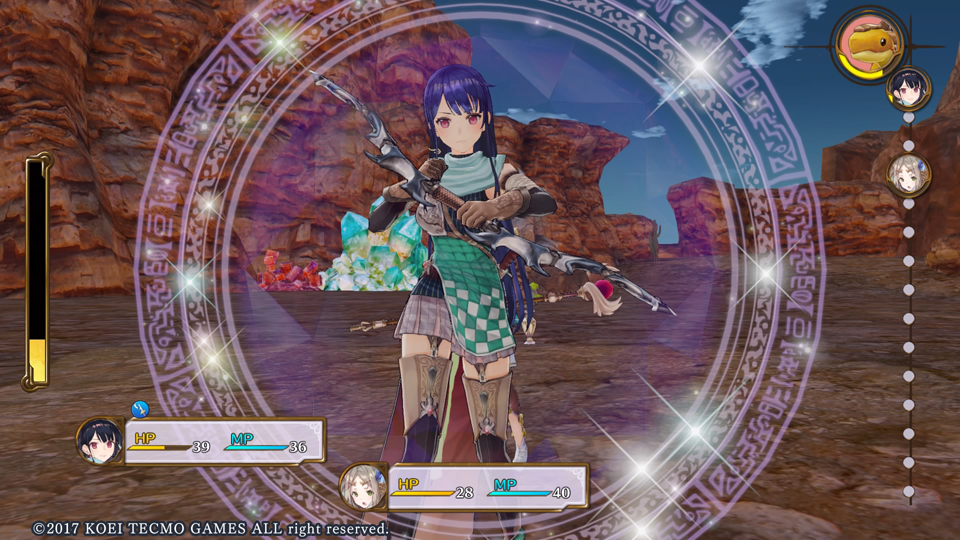 Atelier Firis, on the other hand, follows a more traditional JRPG structure. You start at one point, then travel from zone to zone, region to region, with each area feeding naturally into the next. The closest thing to a home base is a portable alchemy studio that you can set up at campfires dotted around the map. Rather than frequently returning home, you bring home with you on your adventure.

It might seem like an insignificant change, but it gives the world a sense of coherence and fluidity that dungeon crawlers often lack. Atelier Firis isn’t an open-world game, but it gives a similar feel for the world – the scale, the geography, the climate. Most importantly, it lets you organically experience how the world fits together, and how different locations feed into one another.

That’s all important because Atelier Firis is all about travel. It’s a coming of age road trip story – similar to Final Fantasy XV in theme, if not in tone – about a sheltered young girl’s journey across the world to find her place within it. It’s full of adventure, wonder, and danger, but the journey is the heart of all of that. It just wouldn’t work as well as it does with the old dungeon crawler approach. The star of all this, of course, is Firis herself. At the start of the game, she’s never been outside her underground village, so everything is new to her. Even something as simple as the wind on her face and the rain on her skin is a new experience for her, and her excitement is infectious. She finds a good balance between adventurous and naive, making her equal parts both inspiring and vulnerable. Seeing her grow and develop from an innocent child to an accomplished woman over the course of the journey is a delight.

The new approach to level design also makes Atelier Firis a lot of fun to play. Big, intricate maps inspire exploration, which in turn makes gathering alchemy materials far less tedious than it could be. Rarely did I find myself needing to farm ingredients; I usually had more than enough on hand, and if I didn’t, I knew I’d get what I needed as part of the next adventure. Being able to fast travel to previously-visited campsites right from the outset further encourages exploration, as there’s little disincentive for going off the beaten track.

There’s an abundance of side quests, and though they typically aren’t very interesting – generic fetch quests from generic NPCs – they feed that exploratory urge. Even if they simply involve gathering herbs or hunting certain monsters, sidequests guide you to places you might otherwise have missed. They’re also insignificant enough that they’re easy to ignore if you want to just get on with things, and they never become so plentiful that they become an annoying distraction. 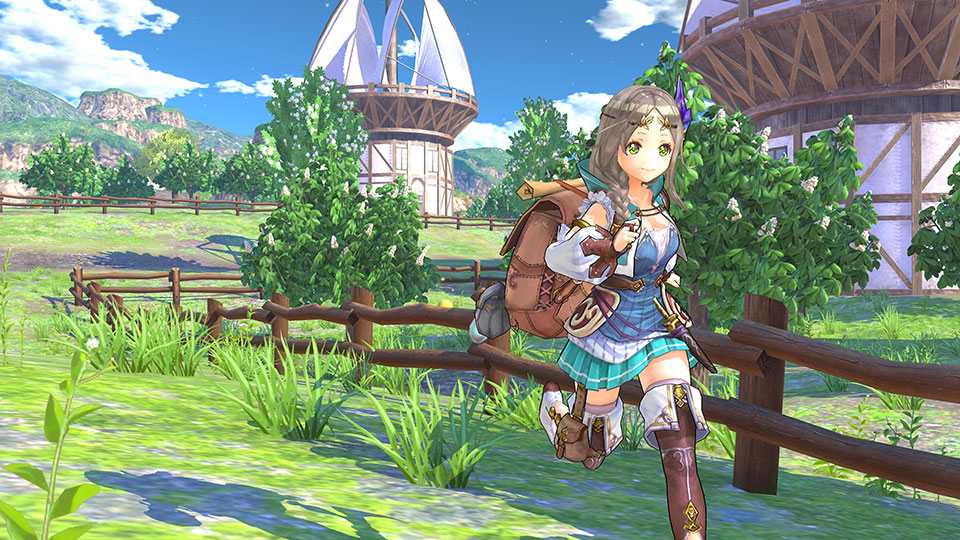 All that exploration and flower-picking feeds into one of Atelier Firis’ core systems: alchemy. At a glance, it works like any other alchemy system in any other RPG, in that it involves combining items to make new ones. It goes a lot deeper, though, enough to warrant being a core part of the game.

Different instances of use same item can have unique stats, influencing the quality and quantity of the result. This is further affected by the actual process for combining the items, which tasks you with placing Tetris-like shapes on a board with the goal of activating as many bonus squares as possible. Throw in catalysts that affect the alchemy board layout, and the ability to pass special bonuses from ingredients to the final product, and you’ve got a deep, strategic minigame that’s easy to waste hours on. That said, if you’re not interested in that complexity, you can get away with just picking the right items for the recipe you want to make, and ignoring all that other stuff. It might not be as efficient, but it works 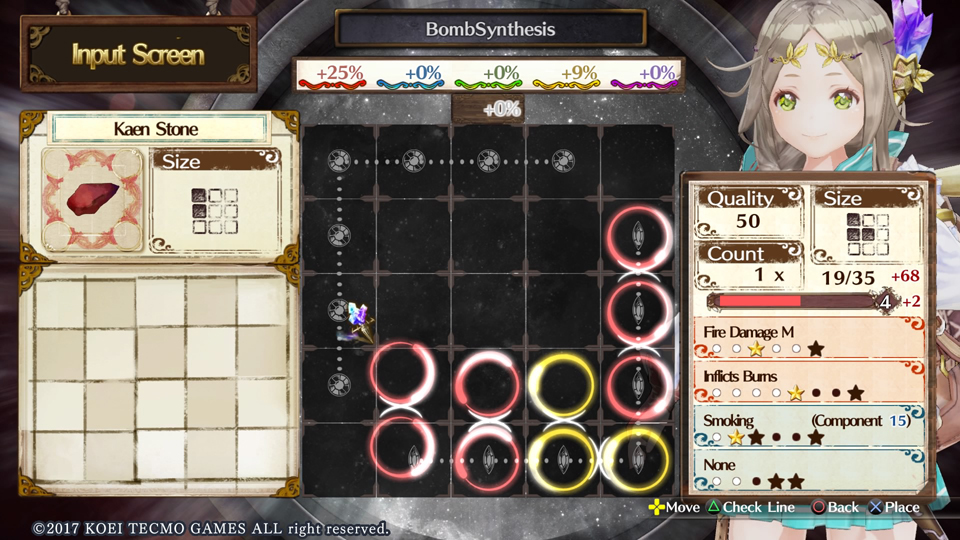 Battles are much simpler, with a fairly standard turn-based system. Characters take turns individually (rather than as a group, like they do in Atelier Sophie), with the speed stat determining turn order and frequency. Some attacks and abilities alter how fast or slow the subsequent turn comes around, and you’ve got the usual array of buffs, debuffs, area attacks, and whatnot to give you tactical options. Topping it all off is a super meter of sorts that charges up when you land attacks, and can be used to either unleash a powerful team attack or shield Firis from damage.

There’s enough variety in the enemies you encounter and the skills at your disposal to keep combat interesting, but it doesn’t have that same complexity as alchemy. That sounds like a criticism, but this is actually makes battles a welcome opportunity to let your brain rest a bit. They’re fun, they’re exciting, they get you that all-important XP and ingredients, but they don’t require a lot of mental effort. I like that. 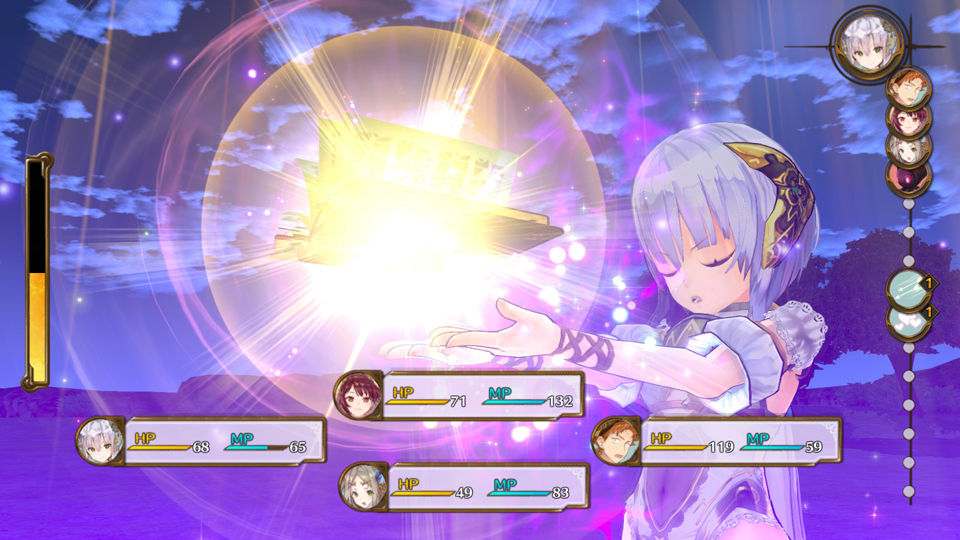 In fact, that’s a good summary of Atelier Firis as a whole. It’s an utterly delightful game, and it’s a game that lets you just have fun without placing too many demands on you. The story is simple and familiar, not in a derivative way so much as in a comforting way. With characters this adorable – especially Firis herself – and a world this full of colour and life, it’s hard not to feel peaceful and happy when you’re playing Firis, and that’s something we all need.

Atelier Firis: The Alchemist of the Mysterious Journey is developed by Gust and published by Koei Tecmo. It’s available now for PlayStation 4 and PC.