A Rose in the Twilight is a dark fairy tale puzzle platformer that’s beautiful, violent, bleak, and uplifting, all at the same time.

Masayuki Furuya is quickly making a name for himself as a game designer worth paying attention to, at least for people who enjoy abstract, artistic games. He made his directorial debut a few years ago with Htol #NiQ: The Firefly Diary, a cult-favourite puzzle platformer with a unique art direction, minimalist dark fairy tale plot, and brutal difficulty. For those who could meet the game on its level, it was an experience unlike any other.

Furuya-san’s latest, A Rose in the Twilight, shares a lot of DNA with The Firefly Diary. It too is a puzzle platformer about a young girl aided by some fantastical helper – a golem, this time. It shares the same dreamlike, desaturated aesthetic, and the same graphic violence that’s all the more impactful for how out of place it seems. In so many ways, A Rose in the Twilight is a spiritual sequel to The Firefly Diary, and another game establishing Furuya-san’s unique direction, but it also manages to find its own little niche within a niche. 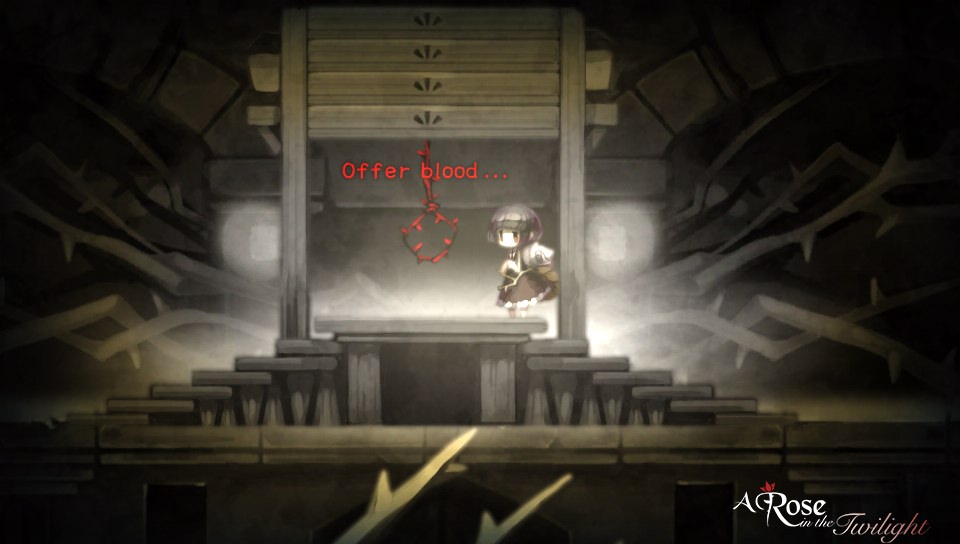 In A Rose in the Twilight, you play as Rose, a young girl afflicted with a curse of thorns. When she wakes up one day in the dungeon of a Gothic castle, with no memory of how she got there. With little other option, she sets about to find her way out, finding out the hard way that the castle’s halls and chambers are full of deadly hazards. After a violent, painful death, she wakes up again – it seems her curse makes her immortal.

It also gives her a unique ability to traverse the traps and obstacles in her way: she can drain red colour out of certain objects, freezing them in time, and inject that stolen red into other time-frozen things. Taking the colour from a broken pillar falling through the air stops it in place, creating a platform to bridge a gap; giving colour to a switch means you can activate it; “watering” a colourless plant causes it to grow; and so on.

Before long, Rose meets an indispensable ally in the form of a strange stone giant. It can pick very up, carry her, and shield her from falling debris. It can pick up and carry objects, and can pass unscathed through thorny thickets that would kill Rose in an instant. Between their unique abilities, Rose and the giant can overcome any obstacle put before them… eventually.  A Rose in the Twilight is fiendish, with puzzles that require abstract thinking and a healthy dose of trial and error. That would often be a point of criticism, but here it works, because Rose’s immortality is a fundamental theme. 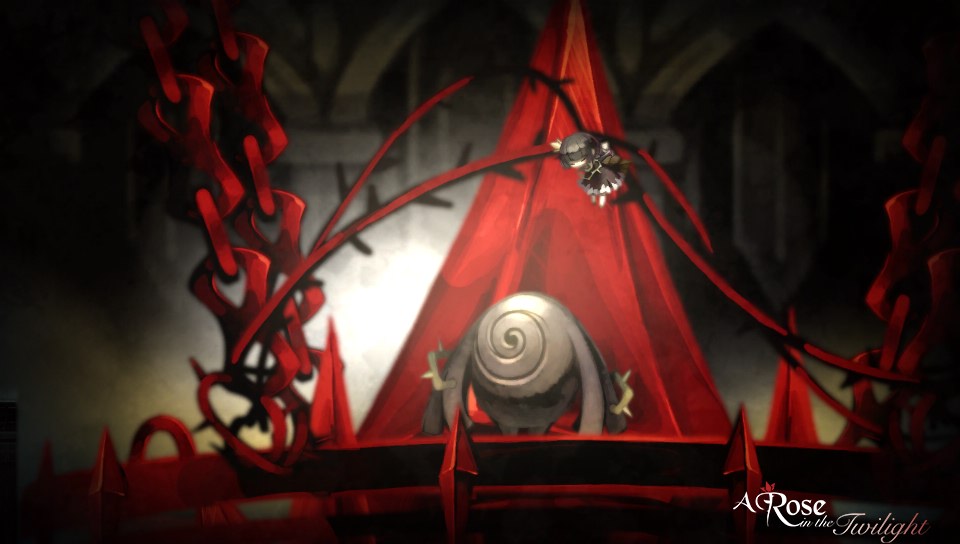 The whole game is a beautiful but exploration of a child’s journey through hell. Despite the abilities of gives her, Rose’s curse is very much a curse, and her immortality is a burden. She has no way out of a seemingly endless cycle of death and pain, and the only option is to persevere through it. In a way, it feels like a metaphor for depression, something I know too well. In the worst moments, depression can feel like a constant, painful struggle without any light at the end of the tunnel. If you can keep going, it’s not out of hope, but because there’s no other choice. You just stumble through life, just as Rose stumbles through her castle.

That theme of depression runs through to the giant as well, who is the rock (a literal rock!) that Rose leans on. The giant’s her companion and her support, and the importance of such people when you’re depressed can’t be overstated. At the same time, the giant isn’t some hero who just carries Rose through her troubles; they’re someone whom Rose works with, in order to overcome the challenges that they face. It’s their cooperation and companionship that gives Rose the tools she needs to get through, and this game isn’t about “overcoming” depression as learning to work through it with that support.

That all sounds really bleak, and A Rose in the Twilight is a dark, depressing game. But it’s also an absolutely beautiful one. The game has a surreal, watercolour art style, but almost completely desaturated – the only colour comes in bursts of red blood and interactive objects. The castle itself is dark, oppressive, and given to ruin, but it also boasts some gorgeous architecture that seems like it has a million stories of its own to tell. Rose herself is the real star, an adorable little girl who comes across as both weak and resilient. She never says a word, but her animations say more than words ever could – her fear as she approaches each new challenge, her hopelessness as she resigns herself to her fate, and those sparks of happiness born of her companionship with the giant. 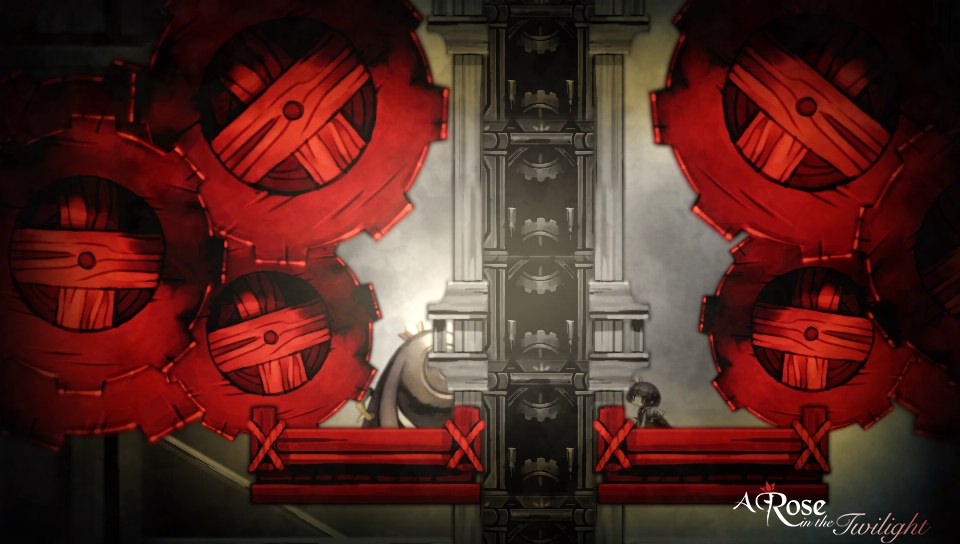 The whole picture that A Rose in the Twilight paints is a sombre, terrifying, yet beautiful fairy tale. Masayuki Furuya’s signature is all over the game, and it has a lot in common with The Firefly Diary, yet it also manages to stand apart and never feels derivative despite those similarities. It’s far more approachable than The Firefly Diaries, too, with less clunky controls and a story that’s still quite abstract but not quite so opaque.

A Rose in the Twilight belongs on everyone’s Vita, and further confirms that Furuya-san is one of the game industry’s most interesting emerging artists.

A Rose in the Twilight is developed by Nippon Ichi Software and published by NIS America. It launches on April 11 (North America) / April 14 (Europe) for PS Vita and Steam.

A PS Vita press copy was supplied by NIS America for this review.