It’s December, which means the “Best TV shows of 2017” lists are coming in thick and fast. On paper, it’s a time to recognize excellent, boundary-pushing television like The Handmaid’s Tale, Stranger Things, and The Good Place (and, apparently, Game of Thrones—apparently people are still watching that). For most people, though—myself included—it’s a time for righteous anger over what’s been missed.

One series that’s getting far less than its share of recognition is Jane the Virgin. As good as most of the shows popping up in best-of-2017 articles are, Jane runs circles around them—it should be near the front of everybody’s lists. It’s a series beloved by its fans and lauded by critics, yet it barely gets a nod. The only conclusion I can reach is that not enough people are watching it.

It’s an easy show to overlook. The title makes Jane the Virgin sound like something quite different to what it is. The premise—a 20-something virgin falls pregnant due to a medical mistake—sounds ridiculous. It’s a parody of and an homage to telenovelas, which aren’t exactly well-known outside Latino communities. It took my wife some effort to convince me to give Jane a go, but I’m glad she did. If not, I’d have let assumptions make me miss out on what’s become my favourite show currently on air, and one of my favourites of all time.

Now, I want to do you the same favour. Here are a few reasons you should stop sleeping on Jane the Virgin. 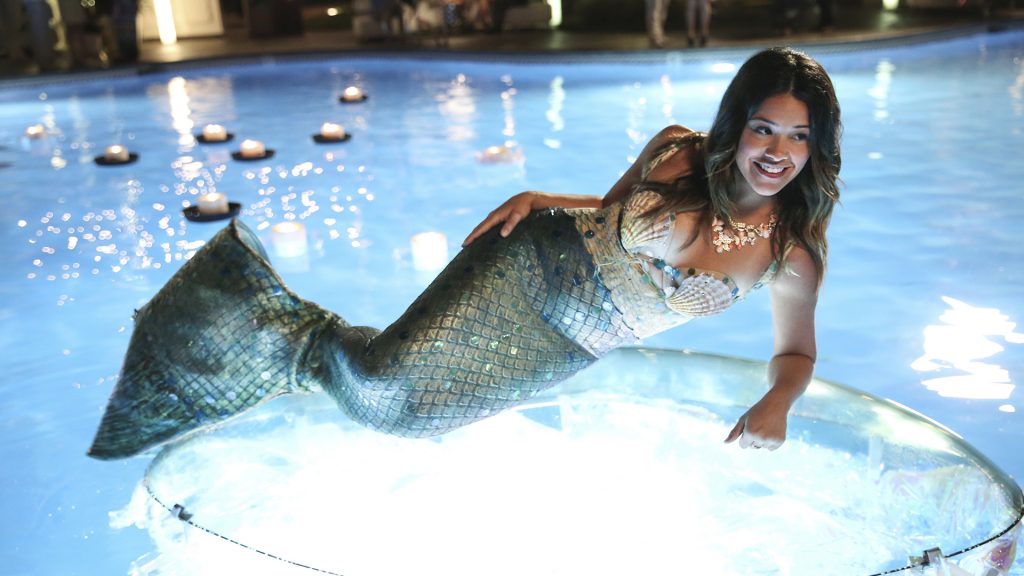 Jane the Virgin is easily one of the funniest shows on TV right now. It’s a loving homage to the outrageous storylines often seen in telenovelas, but with enough self-awareness to make that absurdity into something genuinely funny.

At the centre of the story is Jane, a virgin who falls pregnant due to an accidental artificial insemination. The father? Rafael, the owner of the hotel where Jane works at as a waitress, whose wife is plotting against him,  and who is being investigated for connections to a drug kingpin. Oh, and Jane kissed Rafael five years ago, but he was a jerk and never called her, and the doctor responsible for the accidental insemination is none other than Rafael’s sister. Meanwhile, Jane’s father—the self-obsessed telenovela star Rogelio de la Vega, whom she’s never met—suddenly wants to be a part of her life.

All of that? That’s just the first episode, and it’s the tip of the iceberg of Jane the Virgin’s ridiculous plotting. As it goes on, there’s an increasingly complex (and hilarious) web of storylines involving evil twins, sordid affairs, face-changing criminals, angry exes, marriage, divorce, kidnapping, betrayal, murder…

It’d be easy for such a story—even one so deliberately tongue in cheek—to fall flat. Jane the Virgin never does, though, thanks to its smart writing and great comedic performances. 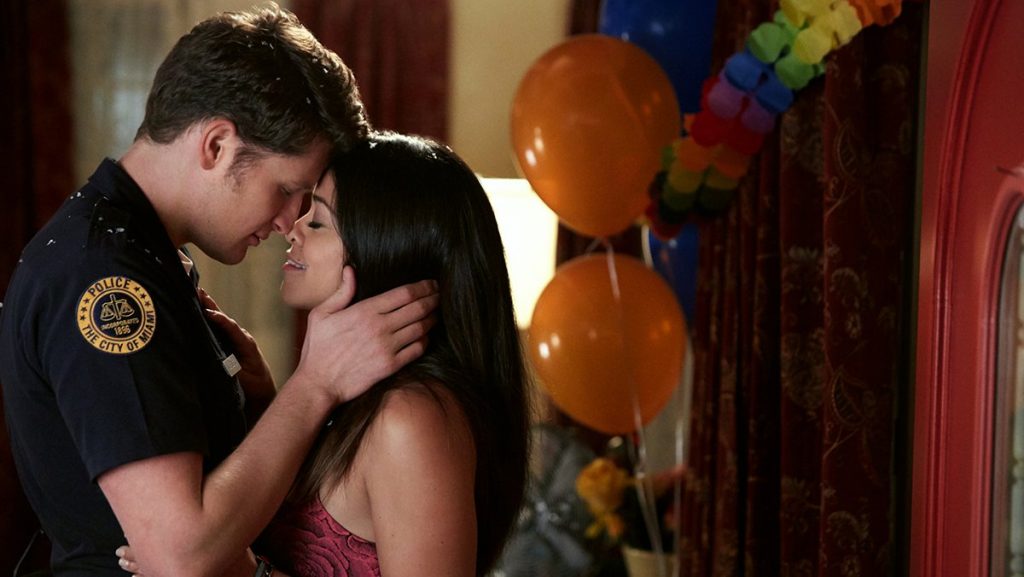 … but also full of heart

For all its eccentric humour, Jane the Virgin is grounded in humanity. At its core, it’s a story about romance and family, and one young woman’s attempts to navigate these tricky facts of life. Bizarre, telenovela-style drama aside, it’s real and relatable.

It’s the sort of show where you can’t help but form bonds with the characters because of how believable and human they are. When Jane the Virgin puts you on a rollercoaster – whether that’s with the shocking reveal of the true identity of villain Sin Rostro, Rogelio’s awkward attempts to bond with his daughter, or Jane’s struggles to understand her own feelings – you can’t help but strap in and go along for the ride.

And as it goes on, as you get to know the characters more intimately and they get a chance to develop, that only intensifies. At this point, partway through season 4, it’s rare that I can go a single episode without shedding a tear. 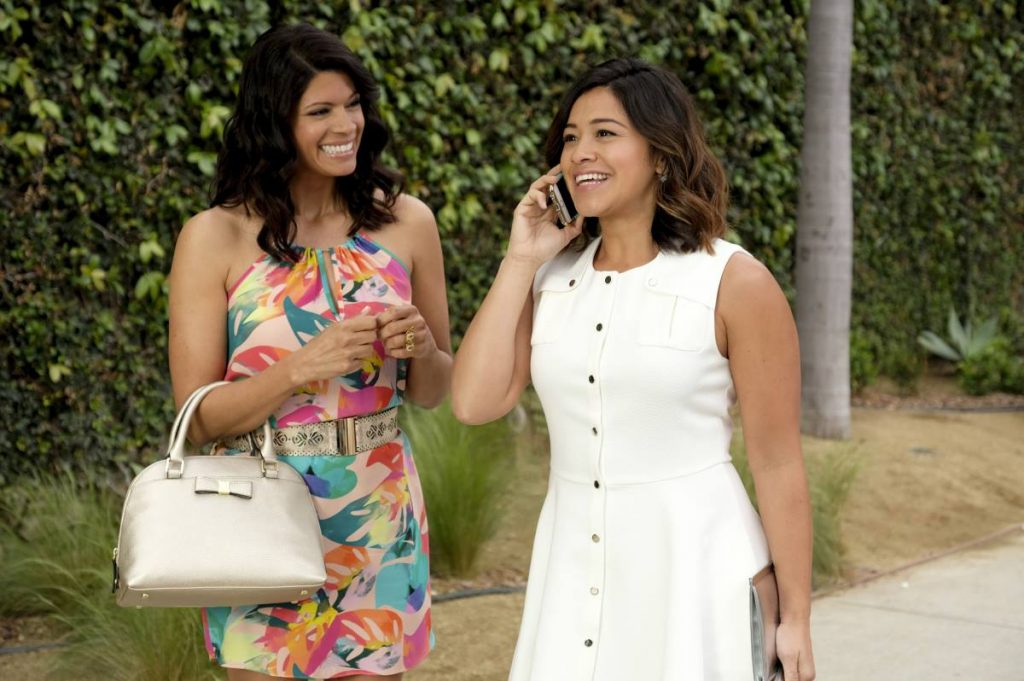 It may have a large extended cast, but make no mistake: Jane the Virgin is a show about three generations of Latina women. Jane is obviously the star, but Xiomara and Alba, her mother and grandmother, are every bit as important. Their relationship, as mothers and daughters, is the cornerstone of the show. As funny as it is, and as adorable as the romances are, Jane the Virgin would be nothing without these three women at its core.

That’s a big deal. Even if it doesn’t have the viewership it deserves, Jane the Virgin is still a prime time show on a major network that puts Latina perspectives front and centre. And it does it without any sort of whitewashing or erasing its Latino roots. It’s there in everything from the telenovela framing, to the character archetypes it touches upon and subverts, to the themes it explores.

This is something that commentator Diana Martinez looked at in detail in an article for The Atlantic, published around the start of Jane’s second season.

“Jane the Virgin doesn’t just make its Latino characters visible: It makes their point of view the dominant lens of the show,” she wrote. “The telenovela is an important cultural touchstone for many Latinos… As such, the format is uniquely suited to amplify how gender and race shape the lives of Jane and her family, making Jane the Virgin the rare diverse show that embraces the cultural origins of its characters on multiple levels.”

It’s refreshing to see something so unapologetically, wonderfully Latino on network television. 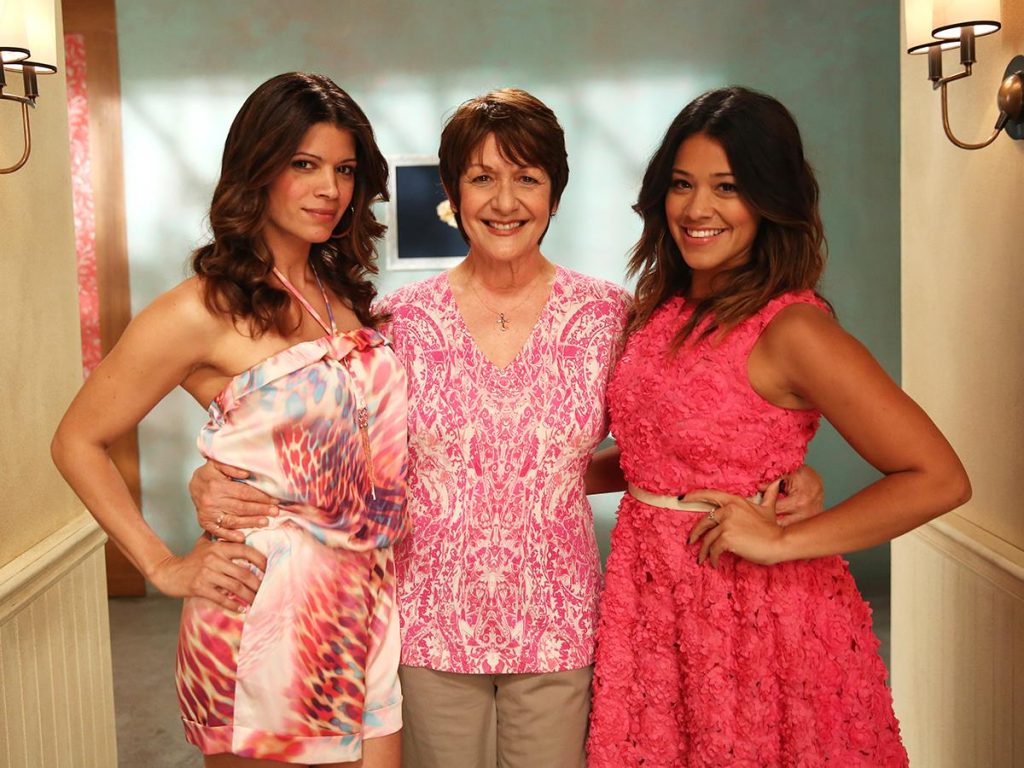 If Jane, Xiomara, and Alba are the heart of Jane the Virgin, then the actresses who play them—Gina Rodriguez, Andrea Navedo, and Ivonne Coll—are its lifeblood. They bring their characters to life in every moment of every scene, no matter how grandiose or intimate. Some of the best moments in Jane the Virgin are when these three women are just sitting on a bench outside their home, pouring their hearts out to each other.

That’s not to say that the rest of the cast isn’t great—they all do a fantastic job, and I wouldn’t change any one of them. But Rodriguez, Navedo, and Coll go above and beyond; they carry Jane the Virgin on their backs with every episode.

Of course, it doesn’t hurt that they’re all every bit as fierce, powerful, kind, beautiful women off screen as their characters are on it. I’d never heard of any of these women before Jane the Virgin, but now I’ll watch anything with any of them in it. 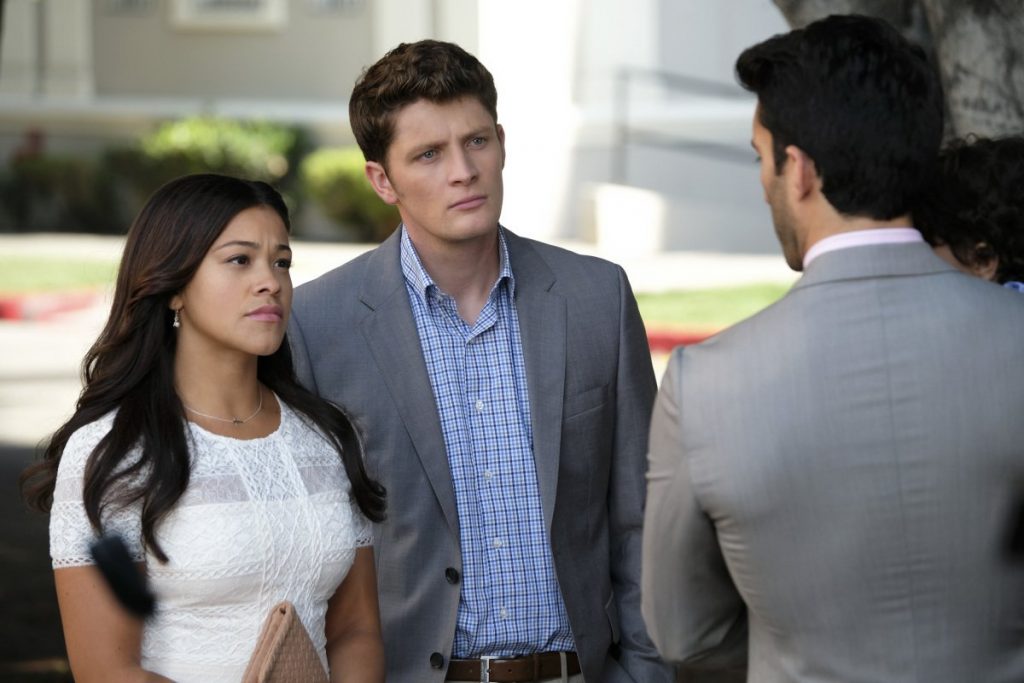 It tackles serious, complicated issues with care and humanity

If Jane the Virgin was just a funny, moving comedy-drama that centres Latino culture, it’d already be a huge achievement. It doesn’t stop there, though; it uses its platform to tackle complex real-world issues seriously and carefully.

In the very first episode, the issue of abortion comes up. It’s the obvious solution to Jane’s problem, but it’s not an easy thing to just do. She carries the baggage of being an “accidental” child, and doesn’t want her own child to carry that burden. She doesn’t want to disappoint her deeply religious grandmother, or her boyfriend who wants nothing to do with this, or the baby’s father who can’t have any more children. Everyone else has an opinion about what she should do with her own body.

Then, towards the end of the episode amid a deep heart-to-heart, Xiomara says to Jane: “I just wanted you to know that you had a choice, because having one… it helps, I think. Whatever you decide.”

Even right there, in that first episode, it manages to take a nuanced, grounded look at the human aspect of abortion: the difficulty of the situation, the weight of expectations, and the importance of choice—be that the choice to terminate the pregnancy or to keep it.

Across the span of three and a half seasons (so far), Jane the Virgin’s given similar treatment to things like immigration, sexuality, religion, marriage, and infidelity—and always with a focus on that human element. 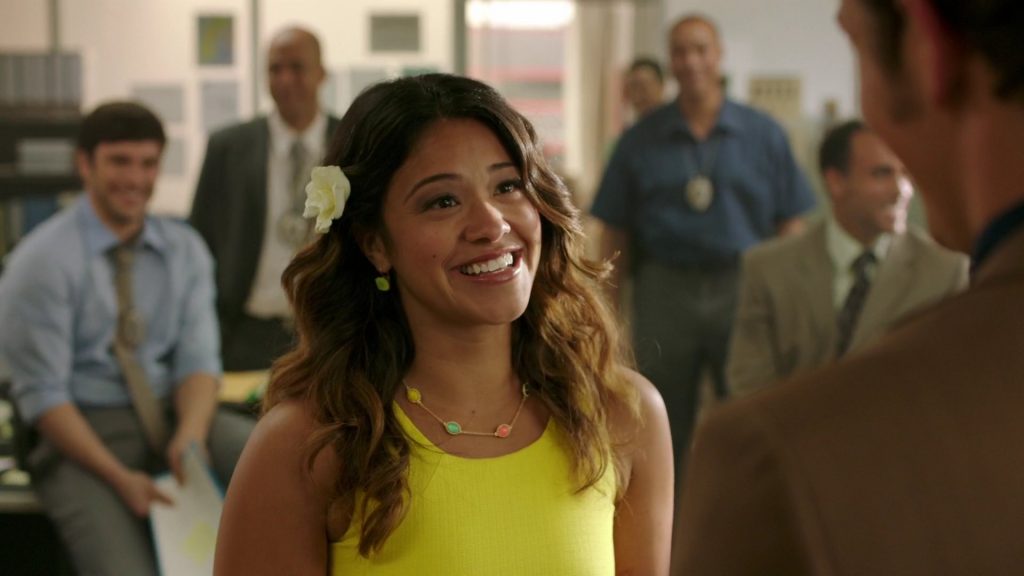 It blessed us with this

If nothing else convinces you to give Jane the Virgin a go, this clip will. (Note: there are minor spoilers for Season 3, but without the context of the sequence of events lead up to this clip, I don’t think they’re really worth worrying about.)

If even this doesn’t convince you of Jane the Virgin’s greatness, I’m afraid you may be a robot that’s missing a basic sensitivity chip.

All available episodes of Jane the Virgin are available on Amazon Instant Video. The first three seasons are on Netflix, and the fourth season is currently airing on The CW.