I love spicy food. I also hate spicy food. An oxymoron? Sure, but it is what it is. I love the flavour of spicy food, and I love the tingly sensation it leaves in your mouth. But I don’t like food so spicy it burns, becomes uncomfortable, and forces me to down sodas like they’re going out of style (sodas will never go out of style, thank the Twelve.)

Which leaves me in a predicament whenever it comes to ordering spicy food. Should I get mild, or medium? How does this place’s medium compare to that other place’s? Will mild be too mild, or will medium be too hot? Should I just throw caution to the wind and get extra hot? (No, never do this.) It’s a rare treat to find a food that’s just the right level of spiciness – tingly and delicious, without being unpleasant.
Which brings us to the newish, awkwardly-named Pringles Xtra Kickin’ Jalapeno Cheese flavour. These are one of those rare foods that gets the balance spot on, at least as far as my tastebuds are concerned. (Which, in fairness, probably means they’ll be too mild for many and hardly warrant the cringeworthy”Xtra Kickin'” name). There’s just enough kick to make the fantastic jalapeno flavour pop, and get that tingly feeling that makes the next sip of cola so good, but without feeling like an army of tiny bandits is trying to raze your mouth to the ground. 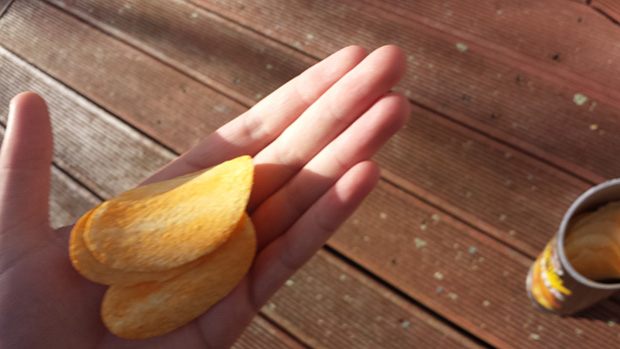 Pringles are known for their flavourful chips, almost as much as they’re known for their odd shape and distinctive packaging that’s a nightmare for large-handed people like myself. (My girlfriend can fit her hand in a Pringles tube; it’s both awe- and jealousy-inducing.) The Jalapeno Cheese flavour takes that to another level, with flavour coating that you can see. Pringles are making a foray into the “Cheeto dust” market – and it’s working well. The only thing better than a fantastic chip? Licking the leftover flavouring off your fingers afterwards.

This does mean that they’re a bit messier than others to eat, and you may want to keep a napkin handy if you’re snacking while playing games or reading comics. Unless you’re playing on your friend’s controller or reading their comics, in which case, go forth and snack without a care in the world*!

It’s a worthwhile sacrifice though, inasmuch as not being a complete and utter slob and wiping down your hands is a “sacrifice”. These are some of the best Pringles – nay, the best chips – I’ve tried, easily situating themselves among Sour Cream and Chives and Honey Mustard as my go-to Pringles flavours.

Just, please, for the sake of humanity, abandon the “Xtra Kickin'” moniker. It’s… not good.

*Disclaimer: don’t actually do this. This comment was purely intended for humorous intent, and if you actually Pringle Dust your friends’ controllers, comics, or anything else, you’re a dick. Don’t be a dick.

Two tubes used for this review were purchased for the reviewer by his partner, because she is the best.