Penance, the first volume of a rebooted Xena: Warrior Princess, is classic Xena: lots of action and a few good laughs, wrapped around the story of the Warrior Princess’s journey to redemption. Once a violent warlord responsible for the deaths of countless innocent people, Xena travels the land trying to make amends by helping those in need–typically, by kicking the ass of whoever is causing them distress.

One such person in need is Gabrielle, a young woman who, fierce though she is, has a bark louder than her bite. Penance opens with an attempted mugging and Gabrielle trying to fend off her would-be attackers with sharp words and bold (if untrue, perhaps) claims of her martial prowess. Just when it looks like words alone won’t do the trick, Xena happens by and sends the bandits running.

Both women are on their way to Athens: Xena to visit the temple to seek redemption for past, and Gabrielle in the hope of finding her missing sister. Much to Xena’s dismay as someone who prefers to travel alone, Gabrielle invites herself along—and somehow manages to argue that Xena has a responsibility for her safety. So begins an unlikely friendship between a deadly warlord turned travelling hero and a fast-talking young woman who likes to crack wise. 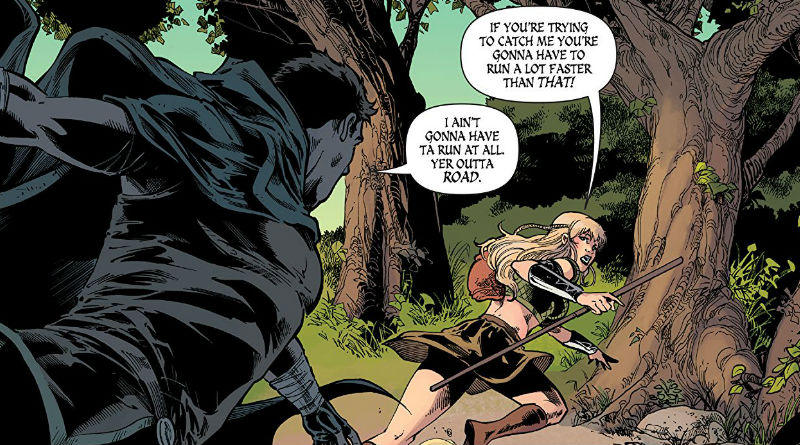 For anyone who’s watched Xena: Warrior Princess or read any of the previous comics, this will be a familiar tale. The growing friendship between the two women is at the heart of the franchise, and though Xena: Penance is a reboot that changes done if the details, it’s still, fundamentally, about that friendship.

It’s a strained companionship at first. The stoic Xena would far prefer to travel alone, and she gets annoyed with Gabrielle’s constant chatter. Gabrielle seems oblivious to this (or simply choose to ignore it), and she seems to talk the pair into trouble as much as talking them out of it.

But their shared trials and tribulations bring them closer together, as such things do. Together, they fend off a pair of giant cyclops, and talk their way out of a run-in with a squad of Roman soldiers looking to take Xena’s head. In Athens waits Callisto, a slave trader who wants nothing more than revenge on Xena for killing her family and razing her village. Inevitably, this leads to a grand showdown where, crucially, Gabrielle’s quick wits play as vital a role as Xena’s strength. As such, Penance is full of action, with a few laughs and quieter, character-building moments to balance things out. This is what you’d expect from something rebooting the Xena story, but Penance plays it too safe; it never really breaks out of the shadow of its source material. It’s good at what it does, without ever being exceptional enough to really stand out.

Like many a “mature” comic, Xena: Penance goes for a realistic approach with its artwork (as opposed to something more cartoonish or stylized), but that makes any oddities far more noticeable than they’d otherwise be. Character’s proportions tend to be slightly wonky, especially in facial close ups, where eyes and mouths often don’t quite line up as they should. It gets quite distracting and interferes with the storytelling as a result, which is the last thing you want from the artwork in a comic. On the other hand, the sense of mobility and intensity really comes through in the action scenes, the artists are great at capturing the mood of each different environment, from a serene forest full of hidden dangers to the busy streets of Athens.

Xena: Penance is an enjoyable enough book, if not a groundbreaking one. It stands alone well enough to be approachable to newcomers, and has its share of exciting action and humour, but it’s the diehard Xena fans who’ll get the most out of this one.