Even if you don’t enjoy sports, it’s easy to love sports manga. Though they vary as wildly in tone as they do in the sports they cover—and just about every sport imaginable has been adapted into a manga series—but you can always count on the universal thread of a coming-of-age story full of friendships, rivalries, and excitement. It’s never just about the sport.

Shingo Honda’s Ping Pong Dash! is no exception. At its heart is Haruku Tendo, a delinquent “yankee” gang leader with an outrageous pompadour and a tendency for violence. When he meets ping pong prodigy Sawa Ichinose and falls for her—after she kicks him firmly in the balls, and shows no fear of his yankee nonsense—he decides to join the ping pong club. Somehow, he has to turn is raw strength into the kind of finesse that the sport demands, while also dealing with constant scraps with rival gangs, but for Sawa, he’ll do it.

Unfortunately, Volume 1 of Ping Pong Dash! overplays its hand in the excitement and, somewhat ironically, is less captivating than most sports manga as a result. A large proportion of the book is dedicated to building an escalating feud between Tendo’s gang and his rivals, but it doesn’t put much effort into humanising these characters or giving you a reason to care about them. There are a bunch of loyal underlings, and one who’s less loyal, but the book does little to explore the why of their commitment (or lack thereof) to Haruku, and they have no personality beyond “reliable soldier” and “sniveling traitor”. 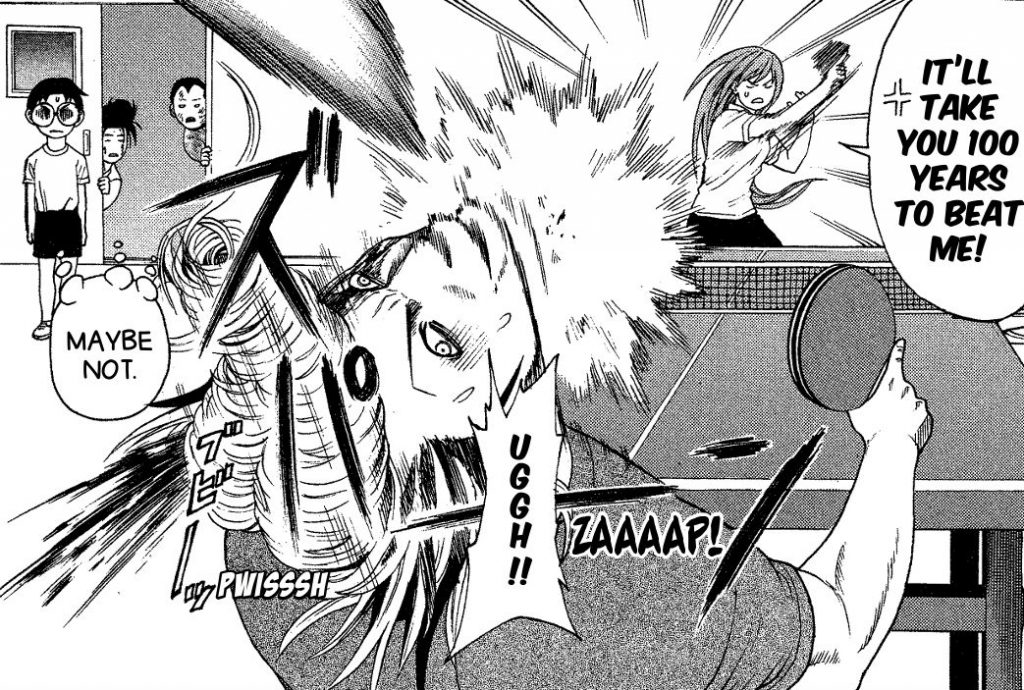 Part of the problem, perhaps, is that “yankee” culture isn’t something that really translates well into the West. The book does briefly explain that the word means something akin to “delinquent” in Japan, but it doesn’t really dig down into a uniquely Japanese phenomenon that can be traced all the way back to the Occupation of Japan in the years following World War II. (Gaijin Rider has a very interesting post about this history.) Without that sort of background, Ping Pong Dash!‘s focus on high school gang warfare comes across as even more aimless.

When the book focuses on Haruku, things fare better. He swings between a violent thug, a determined competitor, and a comically lovestruck teen; these tonal shifts are sometimes abrupt, but he’s the only character who really breaks past being a trope. For her part, Sawa is a quiet, no-nonsense athletic prodigy, but one who has no fear of standing up to Haruku’s bullshit. She’s one of the few people who see Haruku’s potential, and she’s willing to stand by him because of that, despite his more annoying qualities.

When the book actually turns its attention to ping pong, things get genuinely exciting. It’s clear that this is what Honda is most interested in drawing, too; the art in the ping pong duels is kinetic and full of life, compared with the static shots found across the rest of the book, even during the fight scenes. It’s not until the final chapter that things start to really fall into place, with the introduction of new rivals—ping pong rivals this time, rather than other yankees—for both Sawa and Haruku and the tease of an intense showdown in the next volume.

Unfortunately, though, Ping Pong Dash! doesn’t get its hooks in until far too late.