La Dama de la Muerte is quite the departure from Lady Mechanika‘s steampunk roots. Instead, this story is focused squarely on the Mexican Dia de Muertos festival, and the beliefs and legends that come with it. The result is a book that may not be as action-packed as other Lady Mechanika books, but is more heartfelt and every bit as stunning.

A prequel of sorts, La Dama de la Muerte sees Lady Mechanika travel to Mexico, in search of escape after the death of a love one. Upon getting off her train, a fateful encounter with an old priest sets her on a path to Santa Catrina, a quiet village a few hours from Mexico City. Though Mechanika is looking for solitude more than anything else, at the behest of a friendly innkeeper, she finds herself helping out with the town’s Dia de Muertos preparations. .

In this, La Dama de la Muerte gets off to a slow start, and that’s a good thing. A few panels hint at Mechanika’s obvious badassness—like the way she instinctually reaches for a gun when she’s awoken by fireworks—but the first half of the book is, really, about quiet reflection. That’s something that’s often missing from action-focused comics, and its especially rare to see it front-loaded like this, but it establishes the humanity of our heroine and sets a tone of introspection, even in the more heated moments that come later on. Those heated moments do come, though, courtesy of Jinetes del Infierno—a group of apparently demonic servants of Mictecacihatl, the Lady of the Dead. They terrorise remote Mexican villages, demanding tithings and kidnapping the children of those who don’t pay enough. When Santa Catrina gets hit while Mechanika is there, she takes it upon herself to stop the gang.

You can probably guess where that goes. La Dama de la Muerte doesn’t have many surprises, and the action-packed second half comes to a sudden end. The villains themselves aren’t an especially memorable bunch, and the fight—intense though they are—seem to be over before they’ve even really begun.

On some level, though, that seems deliberate. Again, La Dama de la Muerte is focused more in the Mechanika’s introspective journey to cope with her grief than any gunplay or supernatural spectres. But more than that, it’s a look at the Dia de Muertos—the real Dia de Muertos, a celebration of loved ones who’ve passed on, and not the “Mexican Halloween” that it’s often carelessly reduced to.

In the first half, as Mechanika helps out with preparations for the fiesta, she learns about the ideas behind it; it’s a day of honouring the dead and inviting their spirits back to the world of the living for a brief moment. It’s about respect for the dead, and for the goddess who helps guide spirits safely into the afterlife.

Contrast that with Jinetes del Infierno, who take a more European view of death—as something to be feared, avoided, and fought against. They invoke Mictecacihatl’s name, but as one sagely character notes later on, “The Jinetes are not true followers of the Lady. They blaspheme her name.” (It should come as no surprise that the Jinetes aren’t Mexican at all; they’re all white Americans, exploiting and defiling a culture that they know nothing about.)

On a more superficial level, the Dia de Muertos theme, allows for some stunning artwork, especially when it comes to costumes. Joe Benitez and Martin Montiel have a real eye for detail, as you can see in the intracry of at least four different outfits we see Mechanika in over the course of the book. 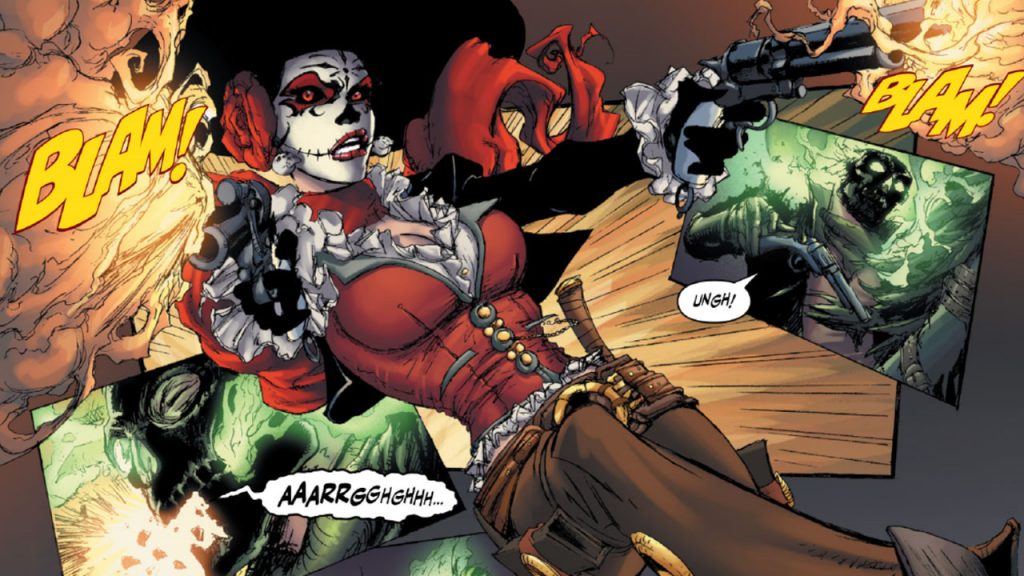 She begins as a sort of steampunk southern belle, and by the end of the first chapter she’s changed into a gorgeous red festival dress adorned with an impressive amount of flowers and lace. She channels Pancho Villa in her combat outfit, and by the end of the book she’s become “La Dama de la Muerte”, Mictecacihatl’s agent of vengeance against the corrupt, in Aztec-inspired attire emblazoned with feathers and gold.

The art team also did excellent job conveying the emotion of the cast. I keep coming back to La Dama de la Muerte‘s solemn atmosphere, and that comes through as much from characters’ expressions as anything else. Whether it’s the grief that Mechanika can’t write his behind her stoic facade or the warmth that radiates from Doña Aniceta’s smile, there’s a clear humanity in every panel.

The colours bring that all to life. Given the tone of the story and the fact that it takes place almost entirely at night, everything’s tinged in shadows, but that doesn’t stop the colourful nature of Dia de Muertos from showing through. If anything it makes the colours pop all the more, and La Dama de la Muerte does a fine job of balancing those dark tones and bright hues. Some people might be put off by La Dama de la Muerte‘s relative lack of action or reflective tone, but I think that’s what makes it as captivating as it is. As an exploration of grief and the oft misunderstood Dia de Muertos, it does an excellent job.