Harley Quinn is one of the best and most interesting characters to come out of Batman’s gallery of villains. Since her first appearance in Batman: The Animated Series, she’s appeared in comics with regularity, and she’s headlined a few books of her own. Once a villain, The New 52 and Rebirth events gave Harley a chance to be reborn as an anti-hero at the hands of Amanda Conner and Jimmy Palmiotti. She can’t quite shake her villainous history, and she still has that careless lawlessness about her, but she’s trying, dammit! She’s trying to be a good person and to help those in need.

Harley Quinn: Red Meat sees Harley play the unlikely hero once again, this time against an immortal alien, a group of cannibals, and a Batfan from the future with a grudge. Red Meat collects issues #14 to #16 of the current Harley Quinn series (volume 3), along with the lead stories from issues #17 to #21. Rather than one long story, there are three short (but connected) arcs here: “Nether Regions”, “Red Meat”, and “A Blast from the Future”.

Amid her investigation into the disappearance of homeless people across New York, Harley unwittingly frees a powerful alien by the name of Zorcrom from a prison beneath the city. Zorcrom decides that he’d quite like to take over the world (as you do), leaving Harley to stop him—but Zorcrom is seemingly invincible, so that’s tricky. Harley’s creative solution? Play tour guide so that she can show Zorcrom just what he’s getting himself into. Under the pretense of teaching him more about the world he’s about to enslave, Harley sets about to buy time and maybe tug at this villain’s heartstrings. 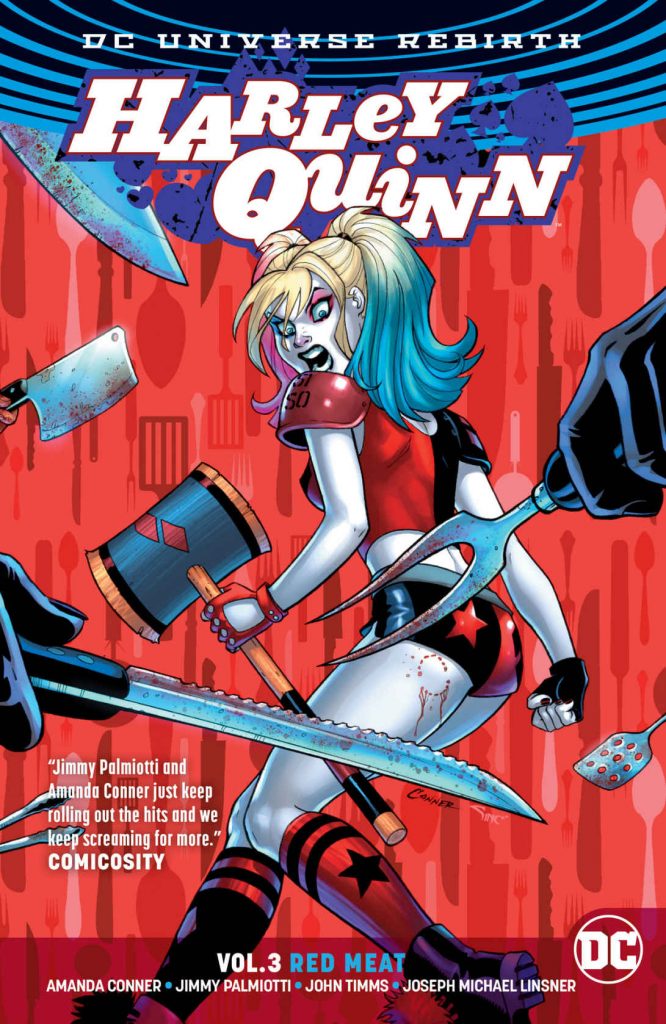 The whole premise of accidentally freeing a villain who’d been bound by past heroes is a well-worn one, to say the least, but “Nether Regions” puts a fresh and humorous spin on it with Harley’s unorthodox approach. Her first goal is to convince Zorcrom to wear pants, because he’s buck naked and his humanoid form includes, presumably, a humanoid penis. I say “presumably” because Zorcrom’s nether regions are always conveniently and creatively hidden: by the hands of bowing insectoid worshippers, by bits of flying debris, by a pair of pants caught in a conveniently-timed gust of wind.

This may seem an odd thing to draw attention to, but it (a) explains the whole “Nether Regions” title, and (b) is a great example of the sort of tongue-in-cheek humour that pervades the story. At one point, Harley takes Zorcrom to a food cart so he can try a hot dog for the first time, which spirals out into Harley having to explain their entire production chain. Elsewhere, he gets bitten by a rabid squirrel and declares war on the entire species. Later on, Power Girl shows up and takes him on a date so that she can try figure out his weakness. Like I said, it’s a bit of a silly plotline, but that’s a deliberate effort, and it gives Connor and Palmiotti a chance to really flex their comedic muscles.

Things turn more serious in “Red Meat”. The problem of with homeless people going missing in New York finally comes to a head when Harley poses as a rough sleeper to find out what’s going on. It turns out—and I swear this isn’t a spoiler; it’s revealed early on—that there’s a group of cannibals kidnapping people, and the person pulling the strings is none other than the city’s corrupt mayor. As always, Harley’s methods are unusual, as are those of her friends Red Tool and Egg Fu, and they keep an element of humour even in this much darker tale. 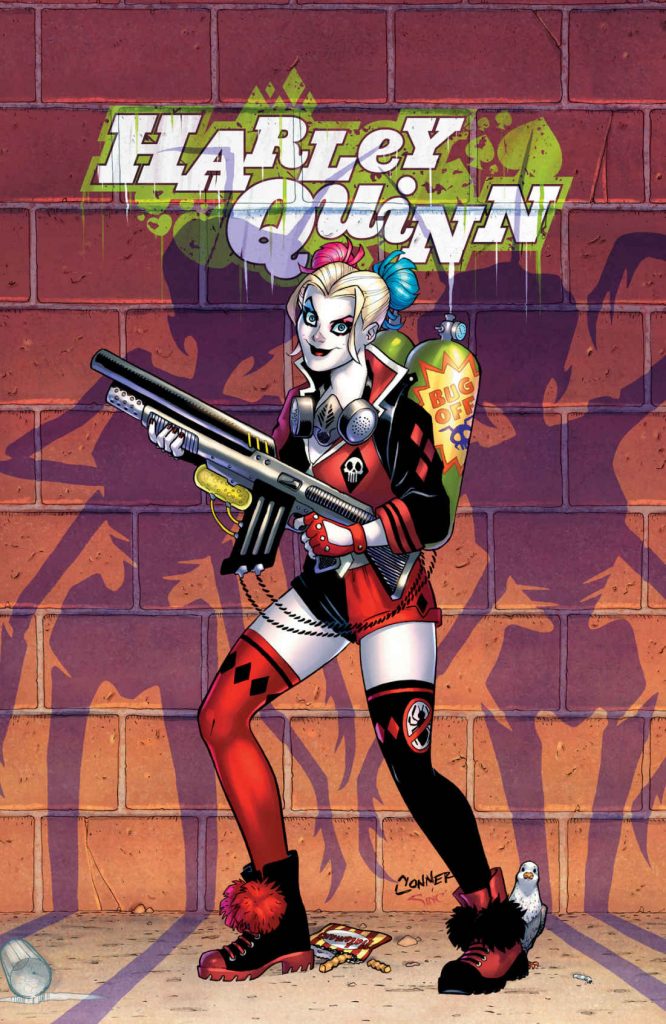 One thing I love about this story is that it shows homeless people as people, which is something of a rarity—not just in comics, but in fiction generally. Harley’s always given a sympathetic ear to those who’ve fallen through society’s cracks, but “Red Meat” goes one further by looking at the way society views the homeless. They’re seen as a problem to be solved, and though most wouldn’t condone of the mayor’s methods, they’re just an extension of widely-held beliefs. With this arc, Connor and Palmiotti put a spotlight on both the humanity of the people society’s left behind, and the inhumanity of the way people respond to them.

The final story in Harley Quinn: Red Meat is the weakest of the three, mostly because it seems to exist solely for the sake of setting up a future arc but does nothing to really deliver on that. Throughout both “Nether Regions” and “Red Meat”, there are cutaway scenes showing a future where Batman is dead and so-called Batfans fight in gladiatorial contests for the right to travel to the past to prevent Batman’s demise.

This builds up to “Blast from the Future”, which sees one Devani Kage win the competition and return to the present day with the sole aim of killing Harley—whom she believes is responsible for killing Batman. Kage is a skilled fighter who packs her own gadget-filled Bat-suit, making her more than a match for Harley. The situation seems dire, and then… it just resolves itself. There are some surprising revelations that’ll no doubt have big implications down the line, but on its own—and as the final story in this paperback—it’s rather anticlimactic.

Harley Quinn is still one of the more interesting titles in DC’s lineup, and the delightful character of Harley herself is the main attraction here. Red Meat isn’t one of those iconic books that’ll be remembered as a classic, at least on its own. For better or worse, this feels like an interlude between bigger story arcs. It still has plenty of laughs and excitement to deliver though, and if nothing else, it’s given us the glorious sight of an alien warlord trying to figure out how pants work and discovering the joy of hot dogs.