It’s an interesting situation to find yourself in, trying to write a review for something that leaves you lost for words. But here I am. Trying to get my feelings (God, so many feelings) in order, and trying to describe something that mere words can’t do justice. Well, here goes nothing.

Bitch Planet #3 is the first of what Kelly Sue DeConnick is calling the “special third” issues – chapters focusing on the backstory of certain characters, with guest artists. In this issue, the spotlight’s on Penelope “Penny” Rolle (you may remember Penny as the awsome person behind “where’m I s’posed to put my tits?!” in Bitch Planet #1), with art by Robert Wilson IV. 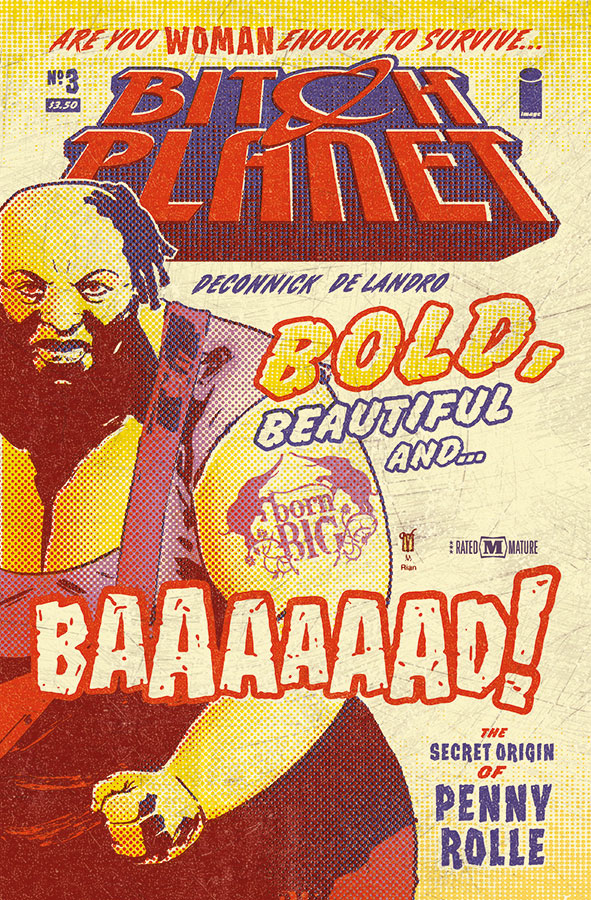 The choice to use guest artists for the flashback issues is an inspired one. It gives the book a visual point of difference to the rest of the series, distinguishing it as backstory without the need for more overt signposting. It’s a bit like using washed-out colours for flashbacks in film, only it feels more organic. I think the idea of having guest artists is great in terms of exposure, but too often, it results in a jarring visual disconnect. With Bitch Planet #3, DeConnick and Wilson IV have taken that disconnect and done something useful with it.

In my reviews of Bitch Planet #1 and Bitch Planet #2, I talked a lot about the series’ approach to themes of body positivity, which had so far been addressed primarily through subtext and context, like billboards in the background of scenes advertising diet pills. These weren’t exactly subtle in earlier issues, but Bitch Planet #3 brings those themes to the foreground in a way that’s powerful, haunting, and inspiring.

The whole book is framed around Penny’s arrest prior to being sent to Bitch Planet. Her crimes? Various counts of assault, but worse than that – judging from the reactions of the “Fathers” reading her record – “aesthetic offenses, capillary disfigurement, and… wanton obesity.” Bitch Planet’s world is one where being fat is, quite literally, against the law.

Amidst the pages depicting Penny’s arrest are scenes going back further. Her childhood, and the arrest of her mother (most likely also for “wanton obesity); her time at an orphanage, being taught to “learn to see herself through the Fathers’ eyes” – Fathers who demand that every woman be thin, straight-haired, and white; and a young adult Penny, running a cafe and constantly having to deal with customers getting a single muffin to share between three people, and news bulletins about the latest weight-loss craze.

Over the course of these brief flashbacks, Bitch Planet #3 touches on so many things, yet somehow does them all justice. Body image and media indoctrination are of course present, but the issue also looks at race (specifically, how Blackness is seen as undesirable), patriarchal oppression, the kind of concern trolling that’s so pervasive when it comes to fatness (“we are trying to help you“), and the denial of one’s identity through something as simple as not using their preferred name.

It all comes leads to a stunning and heartwarming – if not exactly surprising – ending, that I won’t spoil for you. In the space of 24 pages, DeConnick and Wilson IV have written a woman with a huge amount of depth. In the first couple of issues, Penny certainly had a commanding presence and was always a welcome sight, but now she feels like a real person, someone who so, so many people will be able to relate to. The importance of this can’t be overstated, especially in a world where nonconformity and fatness are maybe not illegal, but are certainly things that are browbeaten into people – women in particular – as undesirable. Bitch Planet’s challenge to such notions are both powerful and empowering.

Which brings me to something I’ve neglected to speak about so far. Each issue of Bitch Planet features an essay from the likes of Danielle Henderson, Tasha Fierce, and Megan Carpentier talking about feminism and body image. They’re a fantastic addition to an already excellent comic, adding a sense of weight and grounding to a plot that’s somewhat fantastical, even if the themes it explores are, sadly, anything but.