Bitch Planet #1 did a fantastic job of establishing setting: a dystopian, authoritarian world where compliance is paramount. The creative team haven’t been resting on their laurels though, and even though Bitch Planet #2 turns its attention more to getting the plot rolling in earnest, the symbolism established in the first issue continues to be central. After a start that was already pretty damn strong, Bitch Planet is only getting better. 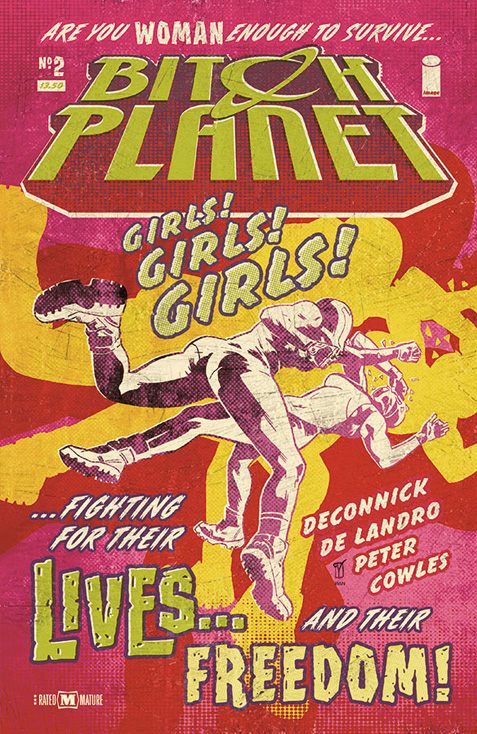 The second issue begins with the opening ceremony for some sort of sporting event called Duemila (or Megaton, in some regions). While the specifics of what Duelima actually is aren’t ever detailed, one thing is made very clear: it’s a massive deal, and plays a fundamental role in indoctrinating citizens and suppressing any urges to rise up. It all feels very Battle Royale or Hunger Games, albeit without the participants going as far as killing each other. At least, not yet.

Framed for a murder she didn’t commit, Bitch Planet inmate Kogo Kamau is given a shot at redemption: form a Duelima team with other non-compliants. Or, as Kogo herself puts it: “Megaton? You want a bunch of girls to get their asses beat to pay for the system that locks them up. The fuck outta here.” It may not be such a bad idea though – a couple of Kogo’s cellmates have some compelling ideas as to why she should go for it…

Just as in issue #1, themes of compliance, rebellion, and body image run deep, across both text and subtext. The scene where Kogo’s convinced to form a team is perhaps the most potent display: four women of colour, bodies ranging from short and slender, to tall and muscular, to unapologetically fat (oh Penny, how I love thee) running on treadmills, contrasted with white-skinned, toned, “perfect” women on massive screens behind them. Importantly, it’s exactly that diversity that will give the Bitch Planet team a chance in competing against the men in Megaton.

The earlier scene with opening ceremony again shows what life on Earth has become – one of conformity and compliance. The people in attendance all feel copy-pasted; men in charcoal or black suits, with short, “neat” hair, and women all wearing what looks like the same outfit, a yellow, strapless, slinky dress. With everything else going on in the comic, this certainly comes across as deliberate rather than lazy, especially when immediately afterwards is a title card spread showing a cohort of Bitch Planet inmates in all their diverse glory.

Bitch Planet was already off to a great start with issue #1, and it only gets better with the second part. This is a book that everyone should be reading.

Bitch Planet #2 is created by Kelly Sue DeConnick and Valentine De Landro, and published by Image Comics on January 28, 2015.