There’s always a lot of hype around really big LEGO builds, be it an official set like the 5,195-piece Ultimate Collector’s Millennium Falcon or a custom build like this 5,000-piece Jaeger robot from Pacific Rim. I’m just as taken with the opposite end of the scale, though; the sets that can capture the heart of soul of their inspiration in just tens of pieces that, fully built, fit in the palm of your hand. It’s for this reason that the DeLorean Time Machine from LEGO Dimensions’ Back to the Future Level Pack is one of my favourites: it’s just two inches long and an inch tall, yet they’ve gone as far including the car’s iconic top-opening doors.

Or maybe I’m just cheap, and sets like the Star Wars Microfighters range are more within my budget at $15 – $20 a pop. Whatever the reason, these tiny little sets just reach out to me, and so of course I was stoked to discover the new LEGO Might Micros series, turning the diminutive spin of Microfighters to DC and Marvel Comics. 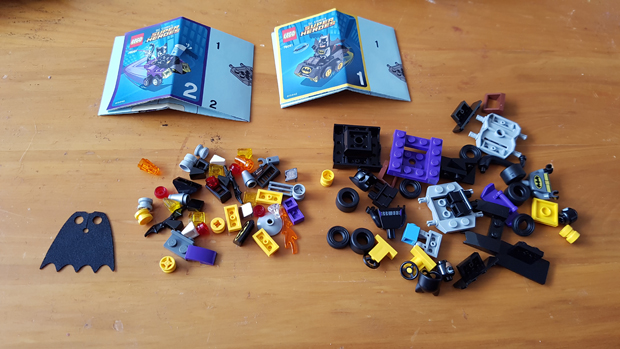 Mighty Micros are even smaller than Microfighters, more comparable to LEGO Dimensions vehicles, but the trade-off is that each set gives you two, a hero and a villain. So far, six sets have been released: Spider-Man vs. Green Goblin, Hulk vs. Ultron, Captain America vs. Red Skull, Robin vs. Bane, The Flash vs. Captain Cold, and Batman vs. Catwoman – which, obviously, is the one I picked up first.

At just 79 pieces, LEGO Mighty Micros: Batman vs. Catwoman is a quick and easy build, taking me around 15 minutes (including stopping every few steps to take photos). If you’re looking for a weekend project, this isn’t it, but I enjoyed being able to just take a little bit of time out of my day to build something, start to finish, in a matter of minutes. 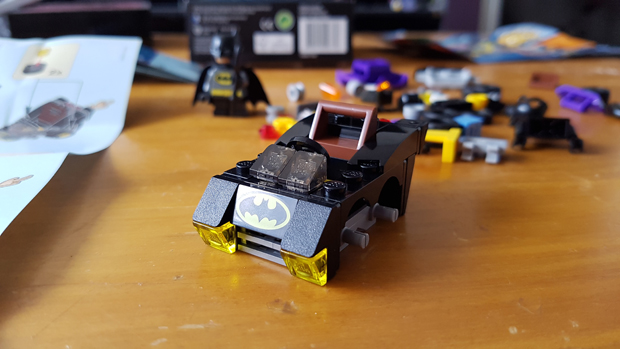 The end result is certainly neat, if not quite up to the level of detail I was expecting after LEGO Dimensions. Batman comes with a Batmobile, of course, which still looks slick even if it’s more simplistic than it’s toys-to-life cousin. Catwoman, not having a trademark vehicle of her own, sports what I’ve uncreatively dubbed “the Catmobile”, a feline-inspired car complete with tail, eyes, and even cartons of milk.

The best part of the set, though, is its included minifigs. In keeping with the diminutive overall style, each one has the short, stubby legs typically used for LEGO children, which gives each figure a cute, chibi feel to it even though the other parts are standard size. Even though both Batman and Catwoman have been minifig-ed a few times before, these ones are fresh and original, with unique facial expressions, like Batman’s comical scowl. Of course, they each come with a couple of accessories: Batman has his usual batarangs, and Catwoman has a large diamond and the aforementioned milk cartons. 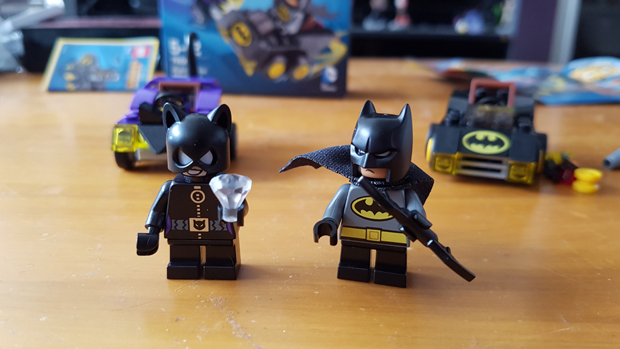 One thing I can’t help but be a bit disappointed by is the range within the first line of Mighty Micros. There’s some good variety, at least, but I feel like some of the character slots could have put to better use. Do we really need both Batman and Robin, when there are only three spaces for DC heroes? Are Ultron and Bane really the best choices for Hulk and Robin’s villains? Why is there only one woman, Catwoman, out of 12 characters in this series?

Still, I expect I’ll at least be picking up Spider-Man vs. Green Goblin and Captain America vs. Red Skull, and as much as I dislike Ultron as a character, the adorable Hulkmobile is probably enough to make that set worthwhile. They may not be as detailed as LEGO’s Star Wars Microfighters or the vehicles for LEGO Dimensions, but LEGO Might Micros are still interesting and cute enough to be worth a look. Here’s to Batgirl, Harley Quinn, Jane Foster Thor, and Wonder Woman (hopefully) finding their rightful spots in future series’.