One of the best side effects of a new LEGO movie (or, really, any movie with a LEGO license) is the range of new LEGO sets released to tie in to it. The LEGO Batman Movie is no exception; since its cinema release earlier this year, we’ve seen a bunch of new sets released, from the Joker’s balloon escape to the Batcave and Arkham Asylum.

Catwoman Catcycle Chase (70902) is one of a handful of sets at the USD $20 pricepoint, though it’s easily the best in that bracket for two reasons: Batgirl and Catwoman. Each of them can be found in a few other sets, but this is the only one where they’re together. (Robin’s also included, but let’s be honest, who cares about him?)

The set depicts a scene with Catwoman robbing a jewelry store, with her trusty catcycle for a quick getaway. Batgirl and Robin have other ideas, though, and are on hand to stop Catwoman’s scheming. I must admit, I haven’t seen The LEGO Batman Movie, so I don’t know how accurately this set captures the film. What I can say is that a Catwoman jewel heist is one of those classic, timeless Batman scenes, and Catwoman Cycle Chase really captures the spirit of that well. 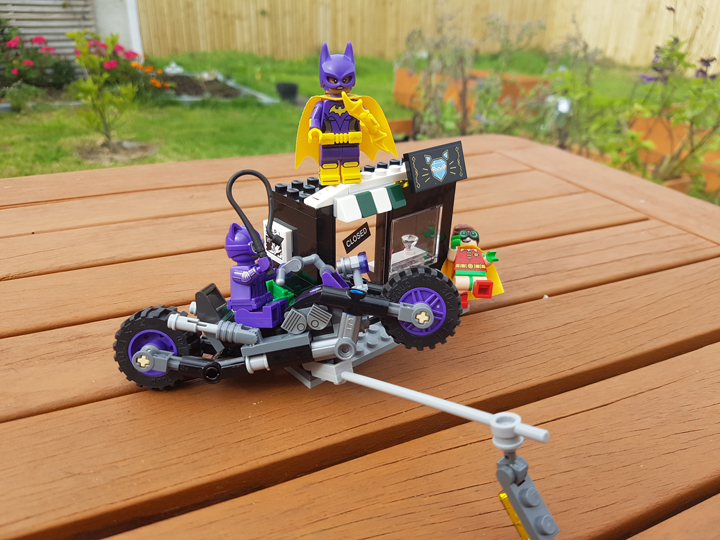 Admittedly, it’s not a big, complex, detailed set. It’s got two structures: the front facade of a jewelry store, and Catwoman’s bike. But as is typical of these cheaper sets, there are a lot of little nifty details to make up for the lack of scope.

A row of green and white 1×1 roof tiles affixed above the shop’s door creates a simple awning, giving it a quaint feel. That’s a stark contrast to the rubbish bin and street light outside, giving the overall impression of a small, independent store trying to get by in a big, grimy city like Gotham. There’s also a flyer for a missing cat on the side wall of the store; it gives it a little bit of a sense of humanity, but mostly it’s just super cute. The best part of the jewelry store, though, is the street light out front – specifically, the fact that it’s constructed with a hinge plate, so that you can easily make it fall over thanks to Catwoman’s reckless driving.

That said, I do wish there was perhaps a bit more to the store itself. It’s a simple facade, most of which is taken up by a glass door and large window, and the inside has only a single counter with two gems. Another display case or two, and maybe a carpeted floor would have been enough to make the whole store feel much more alive, without needing too many extra pieces. 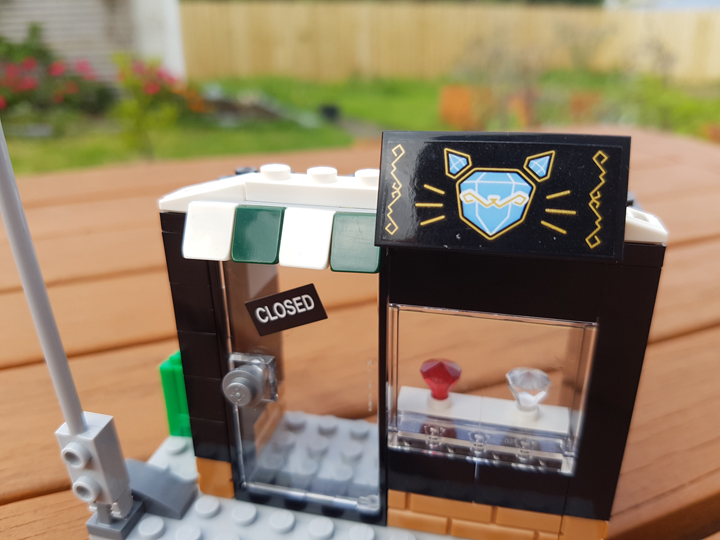 The Catcycle itself is the highlight of Catwoman Catcycle Chase, though, because it just looks so cool. With it’s chunky shape, low-to-the-ground body, and big wheels, it looks almost like a Thunderbike, albeit more cartoony.  It achieves this effect with some clever use of LEGO Technic angled connectors and pins, freeing the model from the usual right angles and slowing the bike to get its distinctive shape.

As I mentioned before, the set comes with three minifigures: Catwoman, Batgirl, and Robin. Batgirl is the standout figure; she’s identical to her LEGO Batman Movie character, which in turn appears based primarily on Babs Tarr’s Batgirl of Burnside design. There’s a lot of detail printed onto otherwise standard minifig parts: straps and buckles on her boots, bat symbol on the chest, even the contours of armour plating. Her head’s got two expressions – a scowl and a smile – with the cowl hiding whichever one isn’t in use. My only real issue is that there’s no alternative headwear; I’d love it if the set came with a regular Barbara Gordon hair piece so that you could do a no-cowl look. She comes with the expected accessories: a yellow Batarang, cape, and utility belt.

Catwoman has a similar level of detail, with lots of printed detail to denote different pieces of clothing, padded elbow pads on her motorcycle jacket, and body shape. It goes as far as showing a zipper in the shape of a cat’s face and a beauty mark on her cheek – truly in character. Like Batgirl, she has two facial expressions, scowl and smile, with her cat-eared helmet hiding the unused one. To finish it off, she comes with a whip accessory and a utility belt of her own. 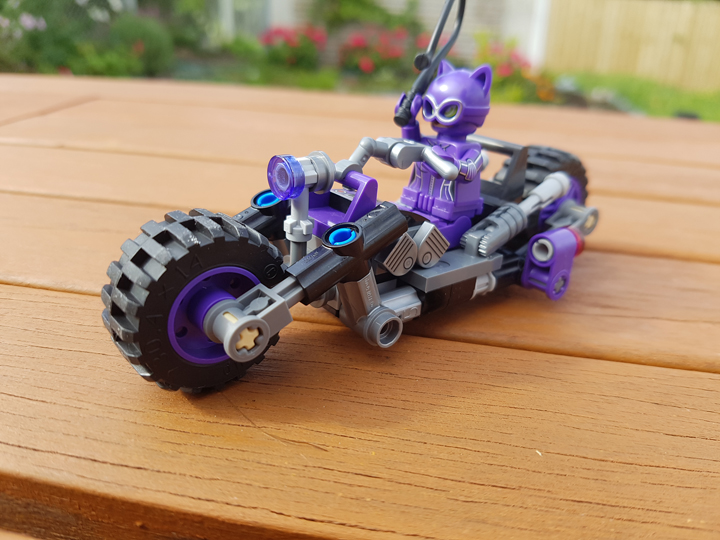 Finally, there’s Robin, and all jokes aside, he looks good. He’s also an exact replica of his LEGO Batman Movie iteration, which is based off his ‘60s look and is intentionally dorky. He’s got no pants, but rather kneehigh boots and shorts that look more like a thong on the LEGO model. His body piece is printed with the iconic Robin tunic, complete with collar and short-sleeve t-shirt underneath. He also has his utility belt printed on, unlike Batgirl and Catwoman, who both have theirs as separate accessories. Robin’s another one with two expressions, but his are an open-mouthed smile of wonderment and a sad look. In lieu of a helmet or cowl, he’s got a bushy head of hair and goggles over the eyes. Sadly for Robin, he doesn’t get any accessories other than his cape.

I must admit, I can’t help but wish there was more from Catwoman Catcycle Chase, but I always feel that way with the cheaper sets. Two models and three minifigs is pretty standard for the $20 range, though, and the end result here is pretty great. There’s a lot of detail in each piece, and some clever design gone into the Catcycle in particular to create something that looks really cool with a limited number of parts.

Shindig purchased the set for the purposes of review.